Bio Mechanics and the Race for the Missouri Senate 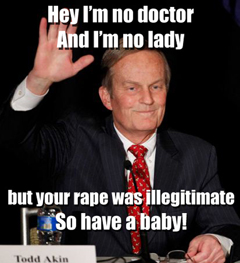 So, at this point we’ve all heard the comments and felt the heat of the Facebook outrage. Missouri republican and candidate for the U.S. Senate Todd Akin said that in cases of “legitimate rape” that the female body can launch some sort of biological defense to shutdown the mechanism of reproduction thereby preventing a woman who was raped, legitimately of course, from conceiving an offspring. I wasn’t the best student in science, but even I know that this is probably the most ridiculous thing anyone has ever said.

A lot of the outrage was spawned by the phrase “legitimate rape.” Clearly, this is a boneheaded statement.

Rape is rape, like murder is murder, burglary is burglary, etc. The definitions of crimes are pretty well spelled out in the legal codes I’m sure. You’d figure a lawmaker, or someone who’s in the running to be, would already be well aware of that. But I’m not a lawyer or a senator, so what the fuck would I know?

I’ll spare you a tirade on “legitimate rape.” Instead, I’d like to discuss this fantastical biological defense system idea, because I love science fiction. I’d also like to keep this from getting political. If you’ve read this column, you probably know which side of the aisle I align myself with, but I’d like to think that not all of the people on the other side share the same moronic beliefs as Akin. Sure, Mike Huckabee, former Arkansas governor who ran for president back in 2008, has been adamant in his defense of Akin. Though Huckabee has said that Akin made a mistake (duh), he’s also lambasted his republican party mates for leaving the senate candidate out to dry. “Political consultants were ordered to stay away from Akin or lose future business with GOP committees,” stated an email Huckabee sent to his supporters. “Money has changed hands to push him off the plank. It is disgraceful…” OK so maybe he’s just defending a buddy. That’s admirable, I guess, even if his buddy is a douchebag. But more recently the governor amped up his game in a call to rally Southern Baptist ministers around Akin, calling it a “Mount Carmel moment,” an allusion to a biblical battle.

“You know, you bring your gods. We’ll bring ours. We’ll see whose God answers the prayers and brings fire from heaven. That’s kind of where I’m praying: that there will be fire from heaven, and we’ll see it clearly, and everyone else will too,” he said.

Like I said, I don’t want to get political. Maybe it’s just the two of them that are crazy? I’d prefer to think that, even though I may disagree with how Republicans think the country should be run, that they’re decent people who just want to do good and what they think is best for our society. If that makes me an idiot too, well…yeah, you’re right. It totally does.

I must be an idiot because the first thing I wondered was why Akin would even think (much less say) his comments were true. Did he believe there was some sort of gland in charge of differentiating whether or not a sexual act was being performed against someone’s will. Is it in the brain or the groin? Is it nestled next to the spleen, perhaps? Also, I’ve done enough watching porn on the Internet to know that sometimes the lines can be blurred between what’s consensual and what isn’t, so can this gland be faulty? Is that why some women are unable to reproduce–because the legitimate rape gland just processes all attempts at intercourse as rape? How come no one has ever discovered this gland before? Do men have a similar mechanism that will keep their penises from getting erect in cases of sexual assault? Other than whiskey, I mean.

Like I said, I was never any good at science, but I’m guessing that the reason why high school bio teachers aren’t telling their students about the legitimate rape gland is because there isn’t one. And I think that’s kind of a sad failure of evolution. As ignorant as Todd Akin’s comments are, I think it would be awesome if the body did have some sort of last-ditch fail safe to thwart sexual predators. I’d take it one step further, however. It would be my hope that when under attack, the uterus would react by opening some sort of transdimensional portal that would churn with such a powerful gravitational force that it would pull the assailant through the vagina and spit him out into an alternate universe, preferably a planet akin to the jail from the old HBO show Oz, where he must endure shower rapings and forcible salad-tossings for all of eternity. I mean, if you’re going to make comments that have no foothold in reality, you may as well go all the way with it. I hate people who do things half-assed.