What’s in the Cards? 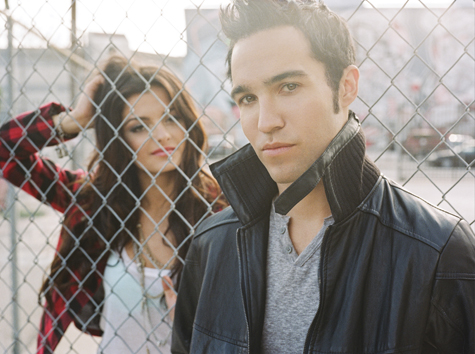 Pete Wentz has become synonymous with energetic, slightly emo pop-punk–not that there’s anything wrong with that. It’s not difficult to understand why. As bassist and lyricist for Fall Out Boy, Wentz helped pen songs such as “Sugar, We’re Going Down” and “This Ain’t a Scene, It’s an Arms Race” that propelled his band’s albums into top 10 rankings on the Billboard charts and garnered the band some hard-earned Platinum. Since 2009, however, Fall Out Boy has been on an indefinite hiatus, leaving Wentz to focus on other things, such as being a label owner, entrepreneur and father. Black Cards is Wentz’s first foray back into music since Fall Out Boy took a vacation, and taking his prior output into consideration, it would logically follow that his new band’s music would be reggae-tinged British-style electro-pop music. Wait…you mean it wouldn’t? Well, I don’t know what to tell you. That’s how this shit works out sometimes.

Wentz started Black Cards out of a desire to do something different. He said in a recent interview with Alternative Press, “I’ve watched people when their bands are on hiatus or whatever it is, and they have the itch to do something, but they don’t really do anything that differently. It makes it all the more easy for people to be like, ‘Well, why doesn’t he just do his [main] band, then?’” But the desire to do something people wouldn’t expect from you and actually pull it off are two entirely different things. Wentz had to go outside himself in order to make it a reality.

The first piece of the Black Cards puzzle was Sam Hollander. A producer and songwriter, Hollander has worked with a wide array of artists from Coheed and Cambria to rap group Arrested Development (he also worked with Gym Class Heroes, who were signed to Wentz’s label Decaydance). Wentz told Submerge that it was Hollander’s encouragement that got him into the studio in the first place post-Fall Out Boy.

“After FOB went on ‘hiatus’ I wasn’t really sure what I was going to do,” Wentz shared via e-mail. “Sam hounded me to come into the studio over and over, but I thought I wasn’t ready. He just convinced me that even if nothing came out of the process I should have a place to let out my energy. As soon as we got in the studio together, it felt right and Black Cards stemmed from that. Sam’s a good friend who knows how to spark my creative side without me even realizing it.”

This new “spark” urged Wentz down a decidedly different path. Instead of penning anthemic rock choruses, he was at work creating his take on Jamaican roots reggae mashed up with the electro pop sensibilities of artists like Lily Allen. Under the guise of Black Cards, he said he’d have the freedom to express things he may have not felt comfortable doing with Fall Out Boy.

“Well after doing something for a number of years–especially with people watching–things are expected of you, and I really feel FOB fans came to expect those type of lyrics and songs from us,” Wentz said. “With Black Cards I really get to start over, be all over the place and it’s OK. I hope fans just take to that and enjoy something new.”

Lyrically, Wentz was looking to get out of his own head. Fall Out Boy’s lyrics tended to be personal. With Black Cards, Wentz is able to look outside himself, and he said that the experience so far has been liberating.

“It’s fun to escape and just be creative,” he said. “You are always the party and everyone isn’t invited: that’s been a hard concept for me to understand. Sometimes I have to learn to give myself a chance to just be me and not worry so much if everyone else is doing OK.”

“It just clicked when I heard her singing,” Wentz recalled of his first encounter with the young vocalist. “I told Sam that she’s the one we had to work with.”Â

Wentz said that Rexha is sort of like his “battery sometimes.” Her youthful energy hasn’t been bogged down by years in the spotlight. Not only is she a fresh voice for Wentz, but a fresh perspective.

“It’s impossible for her curiosity and excitement about everything not to rub off on me,” Wentz explained. “I definitely feel like the big bro teaching her the ropes and she’s a sponge.”

Writing for a female vocalist also provides Wentz with a new challenge–albeit an enjoyable one.

“Its hard to picture myself outside of my own mind in general,” He said. “It’s especially hard to think as a girl from Staten Island. It’s been a fun challenge that is different than anything I have ever done.”

As of now, no release date has been set for Black Cards’ debut album. Though the band has unveiled a few songs here and there, including “Club Called Heaven” and its accompanying Bonnie and Clyde style video. Wentz has hinted in the past that the album is done, but it seemed from our correspondence that nothing is entirely set in stone just yet.

“Every day we think we’re finally done and every day we think of a way to make a line or melody better,” he said. “We’re still getting to know each other so we’re constantly finding differently ways to execute a lyric or switch up a beat. We just want to make sure the album is 100 percent what we want it to be so I can’t make any promises on when it’ll come out.”

Even the title is up in the air as Wentz said he comes up with a new title each day. However, given the serendipitous way Black Cards was formed, you should shed any expectations of how it should turn out and just enjoy the result, whatever it may be.

Black Cards will play District 30 in Sacramento on July 3, 2011. The event will feature a live performance from the band and a special DJ set by Pete Wentz. There is no cover charge if you arrive before 11 p.m., and drinks are also half-off before then. For more info, go to District30sacramento.com.