Though they didn’t set out to become a rock duo, two is the magic number for Black Star Safari

Whenever guitarist Dan Green and drummer Matt Mandella step into a new venue to play as the two-piece rock band they’ve incidentally dwindled down to, people will often just stare at them, not exactly sure what to make of the duo.

“It’s like they don’t know what they’re looking at, or they’re not sure how they should react to us,” Green says of the almost catatonic faces they get from blank-slate crowds.

Once they set up, Green introduces the duo as Black Star Safari from South Lake Tahoe. Still, he says, the fixed gazes continue; the tension in the room builds. And, honestly, if you weren’t already familiar with what comes next, you might be inclined to stare at them too.

Green, with shaggy hair and a slim build, stands well over 6-foot-3, while Mandella—also thin, but not quite as shaggy—is well below 5-foot-9. It’s sort of like you’ve got a younger Billy Crystal and Gheorghe Muresan from the movie My Giant in front of you. And now they have instruments in their hands, and you don’t know what the hell to expect.

Will this be worthy of a scathing review, or will our minds be blown? The question lingers as Mandella taps his sticks, cueing their first song.

Even before Black Star Safari could hold audiences in bewildered suspense, they were really just a couple of up-and-coming musicians in Los Angeles—going to school, jamming with other bands and trying to make a name for themselves. Sadly, it wasn’t long after they received their certificates from the Musicians Institute that they realized Los Angeles wasn’t necessarily the best place to make a living for live music.

Residing in the heart of Hollywood and grappling with low payoffs from gigs in town, Green and Mandella decided to head north to South Lake Tahoe, where Green had grown up and established some professional connections prior to his SoCal stint.

“The first day we got back to Tahoe—I won’t ever forget—we got this house on a golf course for cheaper than our studio in L.A.,” Green says. “And just breathing the air was…just nice to catch your breath and get out of the madness for a minute.”
The move proved to be worthwhile.

Almost instantly, Black Star Safari got plugged into the Tahoe music scene and started exploring the Northern California circuit, including Sacramento. Eventually, the two got to know and play alongside Davis funk band Big Sticky Mess regularly, who generously offered to hook them up with some studio time to record their first EP Cut and Dry.

“They were like, ‘Oh, we have a studio.’ And I was like, ‘Oh man, we need to record,’” Green recounts, chuckling at the memory. “So we came down that next day, and we busted that one out that day.”

“I did the drum parts in like two hours,” Mandella adds.

Which is insane. While Cut and Dry—an effort Green and Mandella consider more of a demo than anything—does sound fairly raw on their Bandcamp page, it feels far from a one-day outing.

And so by June 2014, the two-piece was on the map with an official project out in the universe, something folks could point to and attribute to Black Star Safari. But just as Green and Mandella were beginning this new chapter in their lives—with ideas on their next album already getting underway—so, too, entered their elusive bassist Mark Mickens right around the same time.

Mickens, a fellow musician Mandella had gotten to know in Los Angeles, was “pretty funky” as Green remembers. And when they heard he was moving to the area, the Tahoe pair was more than happy to have him come aboard the safari.

With Mickens added to the roster, contributing a refreshing bassline to the group, things were looking up for the newfound trio. During that summer, they were booked for Tahoe’s annual Live at Lakeview concert series to open for Portland-based guitarist Scott Pemberton, while at the same time beginning to work on their sophomore album.

As quickly as he had arrived, he had cut out even sooner, almost immediately following the band’s final recording sessions for their upcoming album.

“Literally, no call, no message back. Nothing,” Mandella says. “He just completely disappeared. We went to his apartment, and he was gone.”

Naturally, Green and Mandella became genuinely concerned for their bandmate, that is until they finally heard from his roommate that he was alive and well. Mickens never personally contacted them again, however, and Black Star Safari grinded to a bit of a halt.

“I was actually calling to cancel a show,” Green says of one of their gigs at Sacramento’s Torch Club. “I was like, ‘He just… eh, I have no idea.’ And the owner of the Torch Club was like, ‘Are you fucking serious? Get down here, we don’t care. We saw you before; just come down here.’ And that was really big for us. You know? Because we were feeling pretty deflated at that moment.”

“When he left, we weren’t sure what to do,” Green continues. “But we just kept playing, and then we found that people were pretty receptive to the two-piece.”

And for good reason, too. 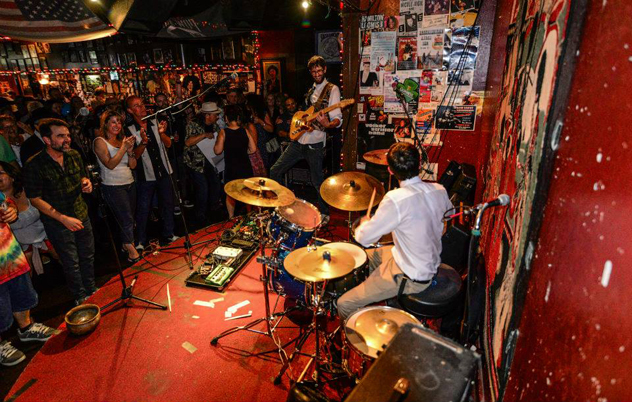 Once Mandella starts to unleash on his drum set, with Green’s electric guitar ripping through the room, the entire mood of their audience shifts, as I recently discovered at their safari-themed CD release show in South Lake Tahoe—the first of many to come this year, they say.

Whether it’s through the thunderous roar of their battle song “Signs,” or in the feel-good, open-ended track “Chapter X,” which allows for improvisation and long, inspired solos, onlookers are unanimously forced to their feet and into motion, having no choice but to surrender to the robust, rockin’ grooves of Green and Mandella’s Black Star Safari.

The band’s newer material is especially potent when played live, with standouts such as “Gold Man Sucks,” “Victims” and the strictly-instrumental “Never Again,” where Mandella races on his cymbals and snare at lightning-fast speeds, while Green strums a menacing riff over and over again before they both break out into a slow-burning, cathartic chorus.

Black Star Safari’s latest five-track EP, All In, maintains much of the same musical diversity found on Cut and Dry, but with a bit more bite to it this time around. While the album has hints of bluegrass and funk in some of the cuts, All In is undoubtedly a rock project through and through.

Despite their recent adversity, it would appear Green and Mandella have found a way to shine in their powerful live performances.

“We just have such a good energy and connection with the two of us,” Mandella says of he and Green’s rediscovered two-man dynamic.

“And I guess that’s kind of one of the perks,” Green adds. “I think that it does make us stand out. For better or for worse, [at] a lot of shows we play, people will come up to us and be like, ‘I thought you guys were gonna suck.’ And then we come and play a decent show, and I think that really catches people off guard.”

As their new album indicates, Black Star Safari is all in for their music—quite literally, it’s just the two of them running the show for now. The duo is planning a tour up and down the West Coast this summer, going as far north as Washington and, really, anywhere else they can park and set up their equipment.

“Not to give away our secret, but, you know, we bought a generator and we have my RV,” Green says. “So we were really just thinking about renegade staging, and just getting our name out there. Just playing all the time, doing festivals and just setting up in the parking lot.”

“But making music instead,” Mandella says. “Make music, not meth.”

Green laughs out loud. “That could be a bumper sticker.”

Celebrate the release of All In at the Torch Club on June 6. Black Star Safari will perform as well as Island of Black and White. The show has a $8 cover and starts at 9 p.m. If you’d like to make a day of it, The Bathtub Gins play earlier that evening during the Torch Club’s no-cover happy hour (from 5:30 to 7:30 p.m.). For more info, go to Torchclub.net.