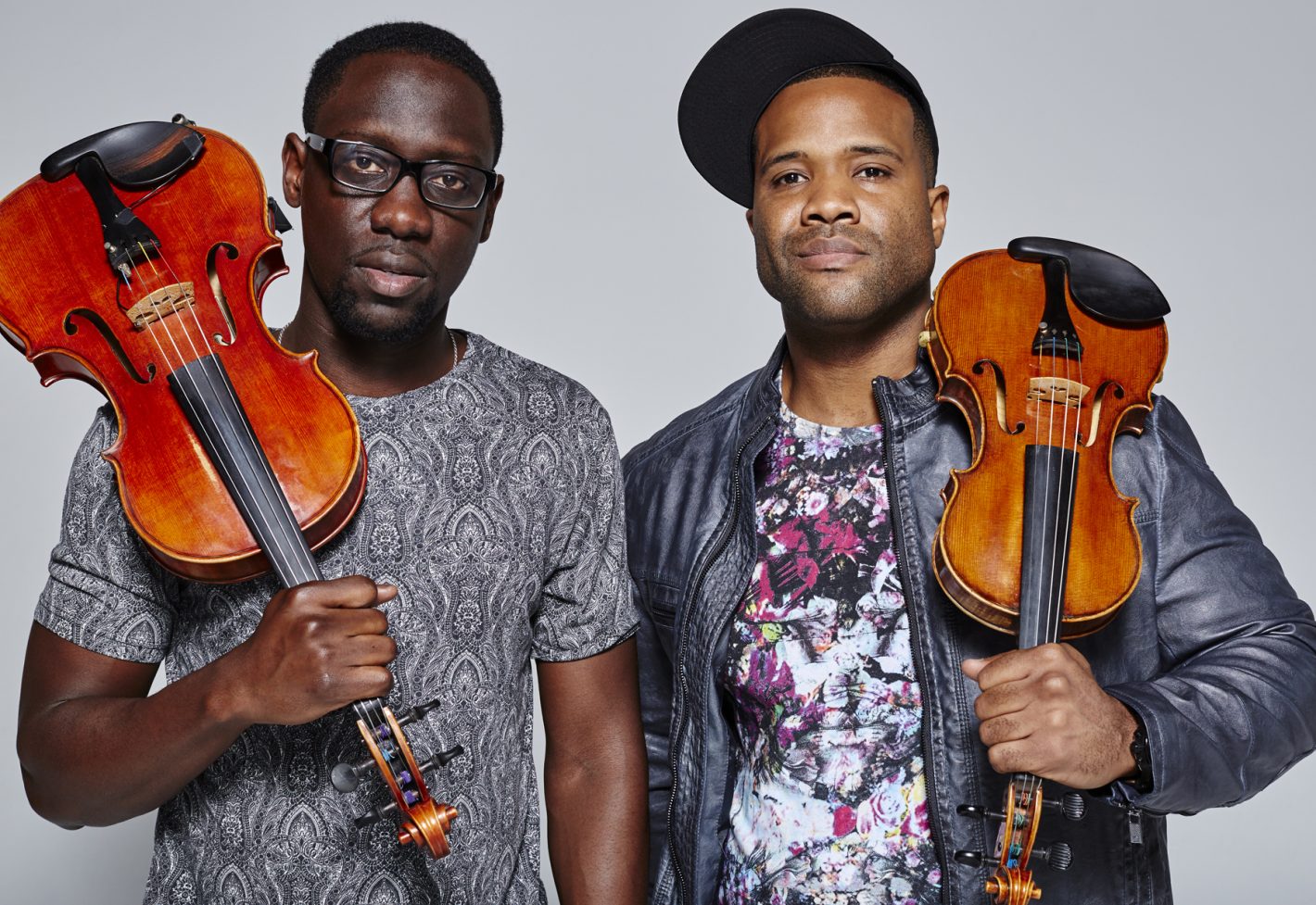 At its heart, Black Violin is an ongoing conversation between two consummate performers engaged fully in the language of their instruments while consistently bending the vocabulary. To date, their playful blend of contemporary hip-hop and classical stylings has gained them stage space alongside the likes of Alicia Keys, Aerosmith and Kanye West; won over notoriously tough audiences at the Apollo Theater in Harlem; and sent them to perform for President Obama’s second inauguration. In the meantime, their unique straddling of two musical worlds has made every show an opportunity to open minds, flip stereotypes and foster an independent musical spirit in the next generation of artists.

Wil Baptiste (viola) and Kev Marcus (violin) of Ft. Lauderdale, Florida, spent much of their youth oscillating between the music that filled their classrooms and the music that filled their headphones after class—a mind-opening series of musical discoveries set them on a path toward fusing the two. They began wowing classmates by riffing on string-sectioned rap tracks such as “Gimme Some More” by Busta Rhymes, and they were introduced to an album of borderline-soul jazz entitled Black Violin by the late Stuff Smith, a legend of the instrument. Some years after college, the pieces would all come into place as they hurriedly chose the name for their act before their first performance on Showtime at the Apollo. The name neatly summed up their concept while belying its complexity—it was bold, immediate, dismissive of barriers—and set the two performers up as torch-bearers for a unique and vital strain of American music.

Three albums later, and over a decade into their career, Black Violin have never stopped honing their craft, touring across the United States and Europe while also branching into composing for the small screen; you can hear some of their music on Fox’s The Pitch, including the extremely catchy theme song, “No Fear.” They’ve also become increasingly devoted to outreach for budding young musicians, making numerous appearances at schools and with youth orchestras around the country. Here they have a chance to impart their favorite and most valuable lesson, and one that translates just as well outside of the band room—how to think outside the box with your given talent.

For most of 2017, Baptiste and Marcus are continuing the U.S. leg of their international UNITY tour, including January stops in Arcata, Santa Rosa, Stanford University (already sold out) and Grass Valley. Their most recent album, Stereotypes (dropped late in 2015) is their debut major label release and serves as an apt introduction for new listeners, filled with fantastic guest spots from Pharaohe Monche, Melanie Fiona and complemented by Baptiste’s vocal stylings—but if you can, get a concert ticket and experience their unconventional virtuosity to the fullest.

We had the recent good fortune of speaking with Marcus to find out about the Black Violin ethos, what it’s like to compose for a show on a major network, the experience of meeting the Obamas and the joy of overturning stereotypes.

How was your 2016?
It was a great year, probably the best year of our career. We had an album on a major label for the first time; we had a great European tour supporting this wonderful band, 2Cellos; we played the Heisman Trophy presentation. I think we did over 140 shows total. It was the year we’d always dreamed of. We were realizing our truest potential. And I think 2017 is going to be even better.

What’s the idea behind the UNITY tour name?
When we do our concerts and we look out from our vantage point on the stage, we see all kinds of different people—black, white, purple, green … There’s 5-year-olds, there’s people in their 90s. We try to make our very existence a unifying thing. There are people sitting next to each other at our concert that normally wouldn’t enjoy the same things, but because of how unique it is, and how inclusive it is, I think we can unify people in a way not many artists do. We have this power to unify and to be really inclusive, and we wanted to shed some more light on that. This tour just has a great vibe. You’ll be entertained, for sure, but you’ll also be educated and inspired. If you’re older and have been listening to classical music all your life, you’ll enjoy it, but you’ll be enjoying if differently from, say, that 15-year-old sitting next to you who listens to Future and Drake all day. At the end, they’ll be able to talk to each other and have something in common.

How did you come to be involved with outreach to youth organizations?
I don’t know if that’s what we set out to do at the very beginning, like putting a violin in a kid’s hand and getting them involved. We were just into making dope music that people could dig. As time went on and we became more popular, there were more eyes on us, and we felt a growing responsibility to give back as much as we take in. At the start, we wanted to be great musicians, to be respected in the hip-hop community as well as the classical community, and as we gained that respect, we realized we had a responsibility to play to as many kids as possible, to help create the next generation of Black Violin, you know, the next generation of forward thinkers. It’s not even necessarily just about the music. Music is just our tool to think differently; the violin is just the instrument I use to express myself. Ultimately it’s about what we can do with the violin, flipping it on its head. Our challenge to kids isn’t necessarily musical. If you want to be the next Steph Curry, just find another way to shoot the jumper.

One central topic in your music is stereotypes. What is it like confounding them on a daily basis?
It’s sort of my favorite thing about doing this. I like that I can take this instrument with me wherever I want and play it, pick it up and soothe myself, because I can speak through it. Next to that, however, my favorite thing about playing the instrument is that I’m not supposed to play it, you know? I’m a 6-foot-2, 265-pound black guy with a beard, who’s a big football fan. This guy who I am is not supposed to be a classically trained violinist. Every time we get up on stage and do our thing, we change perceptions of what a violin is supposed to sound like, who’s supposed to play that violin and what a black man is capable of. Anytime we’re on stage, we convey that without even trying, because that’s who we are.

How did Black Violin by Stuff Smith change you when you first heard it?
It changed my perception of what was possible. When I went to college, the first day of class, my teacher gave me that tape and told me listen to it. I’d never heard a violin play soul before. I’d heard classical in every way possible, bluegrass, country, jazz violin, but I’d never heard soul violin. It was like hearing something that was alive—like when I first heard Jimi Hendrix play—there’s a heartbeat in it. I never thought of violin in the same way after that. I gave the album to Wil and he felt the same way. Fast-forward three to four years later, we went to do an act at the Apollo and were trying to decide what to call ourselves—the album was the first thing that came to mind.

What’s your approach to composing for television?
This is the first time we’ve ever done anything like this. We just finished the first season of The Pitch. It was definitely a different experience. My whole career since college, when we started Black Violin, has been about making music for us. Now we’re creating music for specific characters. We’re trying to create soundscapes to the work the actors are already doing. We’re contributing to a piece of art, but we’re not the sole creators of it as we are with our albums. It was a learning experience for sure, a different approach to figure out how best to be true to ourselves musically and also make the producers happy. I listen to music a lot differently now, especially in movies and television. I study them a bit more. I notice how the music is married to the images, like in the show Westworld. We try to make music that is more dense. It needs to be epic, it needs to be bigger.

What’s most exciting in music right now and who would you want to collaborate with in the near future?
I think over the last couple of years, especially in pop music, we’ve been in a really repetitive state. But there’s been some albums in the last year that give me hope that 2017 is going to be evolving more musically. Childish Gambino’s album was a masterpiece. I thought it was amazing. Anderson .Paak is another one that I really like, I think his voice is dope, and what he’s saying, his soul vibe— plus, he’s a drummer. Beyoncé, I love her; we haven’t had a chance to work with her—that’s sort of a bucket list thing. Collaboration doesn’t even have to be complicated. I just want to be involved with something that Beyoncé does. There’s Kaytranada on the electronic side, I’m really into that right now—also Flume. I’d love to work with Alicia Keys again. But my ultimate bucket list collaboration would have to be Stevie Wonder. I’d drop anything to work with him. He’s one of those rare people, I think, that never sang a note or said a word that he didn’t truly believe. Bob Marley had that quality, too, I think.

What has been your proudest moment thus far?
It would be performing for the president, I have to say. President Obama—I have to clarify that now. Playing at his second inauguration would have to be the proudest moment in my career. To meet him, Michelle, his kids, shake their hands—it’s hard to top. I’ve never had anything come close to that moment. Standing in line to meet him with Usher, it was a surreal moment, being in the midst of all these superstars. Then I got up and gave him the bro pound and a hug.

What is your advice to musicians for thinking outside the box?
I couldn’t do the things that I’m doing now without completely being dedicated to the violin. We didn’t really try to switch and integrate hip-hop into it until we were well into college, and we’d been playing 10 to 12 years at that point, classically. But I would have quit the instrument a long time ago if I wasn’t able to pick it up and make it mine, play whatever I wanted to with it, and find a way to do something that people would react to.

Don’t miss your chance to see Black Violin live at The Center for the Arts’ Main Stage Theater in Grass Valley on Jan. 29, 2017. Tickets are $52 (which includes facility fee) for non-members and $47 for members. To purchase tickets, go to Thecenterforthearts.org.