Work in Progress, with Blaqk Audio 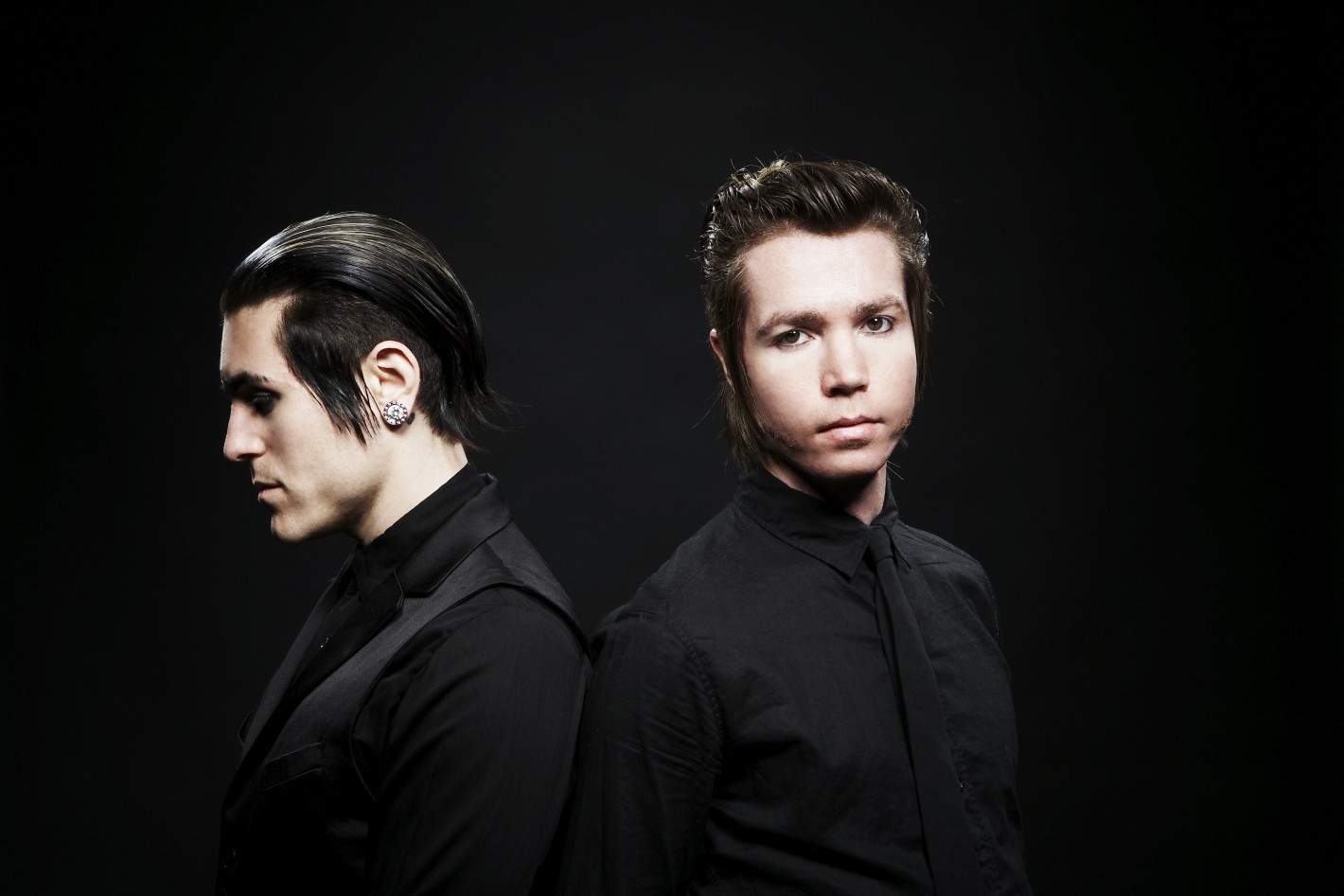 Submerge caught up with Blaqk Audio frontman Davey Havok (you may also know him as the singer for dark punk band AFI) at a strange time. At the moment, though he and his partner in Blaqk Audio Jade Puget (AFI’s guitarist) are very hard at work writing new songs for their forthcoming album, Bright Black Heaven, Havok doesn’t really have anything immediate to plug; which, as you’ve probably noticed, is the main reason why artists do interviews in the first place.

“It’s been a while since I’ve spoken to anybody,” Havok jokes as he tries to remember the name of a recent song (“Down Here” (song above)) the band had posted to the Internet. “It kind of catches you off guard, because you’re not used to talking about this stuff.”

Havok and Puget began working on Blaqk Audio’s Bright Black Heaven shortly after the dance-pop/electronica project’s first album, 2007’s CexCells, was put to bed. In fact, Bright Black Heaven was even completed, but disagreements with their former label Interscope left the album in a sort of limbo. Undeterred, Havok and Puget stuck to what they do best–making music–and an album’s worth of songs ballooned into what could be an entire catalog for some bands. The result is a murky future for Blaqk Audio, still searching for a label, but as we discuss in the following interview, an undefined path ahead doesn’t necessarily have to be a bad thing.

According to Havok, there are now 33 songs tracked and ready to go for Bright Black Heaven. On top of that, 10 to 15 more are written but remain, as of our interview, unrecorded. With the amount of material they’ve been working on, it’s easy to forgive Havok’s fumbling for a song title. Some of the songs that have been created for Bright Black Heaven are three years old, including the aforementioned “Down Here.”

“‘Down Here’” was the first song that we completed after CexCells,” Havok explains. “We were actually sound checking that song during the CexCells tour.”

Given the span of time over which these songs were created, there are certainly differences in the material. Havok says that Puget steers the direction of Blaqk Audio as far as the music is concerned; however, Havok has noticed that what he’s received from Puget over the past three years has run the gamut of the electronic music spectrum.

“We have a lot of very dramatic, dark, down-tempo songs; we have lots of very high-energy pop-y songs,” Havok says. “There’s some stuff that’s glitchy, big room stuff. There’s more traditional synth pop-sounding stuff. It’s really all over the place, which is going to make it difficult when it comes time to choose what’s going to be on Bright Black Heaven, because as I’ve said, there are so many options.”

While the variety may make it tough to choose which of the songs make the cut, Havok also acknowledges that it’s sort of exciting knowing Bright Black Heaven can go in a variety of directions.

“It is fun, because it really leaves the door open for us,” he says.

Though their future is unclear, it’s still possible to check out some of the music Blaqk Audio has been working on online. “Down Here” and “Bon Voyeurs” are available on the band’s Soundcloud page (Soundcloud.com/blaqkaudio). Also, Havok says he hopes the group will release “some 12-inch singles before summer is over.” He also hints that these singles may be available for download. In the meantime, Blaqk Audio fans will have to wait and see, but good things do come to those who wait.

Blaqk Audio, obviously, is so much different-sounding than AFI. Was that something that you thought about? Like when Dave Grohl went from Nirvana to the Foo Fighters, he was still doing a similar type of rock music, so his fans with Nirvana could make the jump to the Foo Fighters more easily.

What we were doing with Blaqk Audio, we really didn’t take AFI into consideration at all. It doesn’t really have–other than two of AFI’s members are in Blaqk Audio–they really don’t have anything to do with each other. It wasn’t a matter of what we do with Blaqk Audio wasn’t meant for AFI fans. Of course, we’d be happy to have AFI fans, and we’re always happy if AFI fans appreciate what we do, but it’s such a completely different kind of music, that wasn’t really taken into consideration.

You might as well aim high.
Right? Maybe one of the three will come out.

You said that Jade holds down the feel of the album musically. What have you been focusing on lyrically since the last album?
You know, it’s kind of an extension of the themes that were on CexCells–that hedonistic, sexual scenario/ethos that is running through that record, and it kind of goes further beyond that. For me, electronic music is so otherworldly, which is odd, because it’s so manmade. It’s a machine, but it’s very fantastic. It evokes these images of these endless possibilities of otherworldliness [laughs]. I’ve always loved electronic music for that reason. It has always inspired me in very different ways than acoustic instruments have. Bright Black Heaven is very similar thematically to CexCells. A lot of it is kind of biting–I wouldn’t say tongue-in-cheek, but there’s a lot of humor to it, dry humor, sometimes. It’s hard for me to talk about, again, because there are so many songs. I don’t even know what’s going to be on it.

Changing gears a bit, you played St. Jimmy in the Broadway cast of American Idiot this past March. I saw in an interview you had with Mark Hoppus before your run started that you’d always wanted to do something on Broadway. Now that the experience is passed, did it live up to your expectations?
It’s funny, because it really did. It’s funny you should ask that, because it sounds outrageous and trite to say, but it was very much a dream come true in every respect. As I said in that interview you saw, I grew up dreaming about doing something like that and thinking it would never possibly happen to me, and now that I’ve done it, it was exactly how I dreamt it would be–living right in the center of Manhattan, near Times Square, getting up every day and performing with a hugely talented cast who, as it was in my dream, were really welcoming. There was a huge solidarity between them and us. And of course, the actual performance and being in the show was so gratifying. It’s so fun and has such a purity to it and a precariousness to it and an energy to it that’s unlike anything I’ve ever really experienced, except for when I was doing it growing up, but that was at a completely different level than Broadway. It was one of the best experiences of my life.

Is that something that you’re hoping to pursue further?
I would love to do more acting and more theater. It’s something I’ve always enjoyed, and having just done it, it just reaffirmed how much I love doing it and how much it means to me. I seemed to get a pretty good reaction when I was out in New York, and I met some people, and I do hope they’ll call again. I’m sitting here and waiting for Broadway to call [laughs]… I wasn’t waiting before and it did, so maybe I should stop waiting and it will again.

So you were a kid at the time.
Yeah, I was a kid, but I wasn’t a baby. I have vivid memories of the city. I used to go to Go Skate, which was a skate shop, I think, on Fair Oaks… There were malls. I remember that I used to go to Sunrise and Birdcage, and they had midnight movies at both. They had Rocky Horror and The Wall. Frozen yogurt–the beginning of the frozen yogurt craze. Everyone thinks Pinkberry is a new thing, but in the late ‘70s/early ‘80s there was Honey Bear Yogurt, and there was a Vans store in Sunrise as well. I always coveted the Spicoli checkered slip-on Vans, but I was so young that I could never get them, because they didn’t make them in kids’ sizes back then, which is really sad. I’ve never had a pair to this day. I can get them now… I’ve often thought I should get those just to have them, because I’ve always wanted them.

Why do you think you haven’t gotten them yet?
I don’t know. I just can’t picture what I’m going to wear them with… But you can pretty much wear them with anything. It’s not like I don’t have a bunch of Vans, because I do. I suppose I eventually should.

See Blaqk Audio play Ace of Spades in Sacramento on June 4, 2011. Boggan and Hamm FM will open. The show gets underway at 7 p.m. For more information or to purchase tickets, go to Aceofspadessac.com. To keep abreast on Blaqk Audio’s new album and to check out some of the band’s new tracks, point your browsers to Blaqkaudio.com or peep Brightblackheaven.com.