Where Is The Fun In Seriousness?

Local punk trio BOATS! talks about their latest LP and being misunderstood

The guys in local punk band BOATS! could have a future in comedy. It’s difficult to know when they’re being serious, and when they’re just baiting.

During their phone interview with Submerge, they gave us permission to make this whole article up. We didn’t take them up on the offer, so you can keep reading.

When we spoke with two of the three members, the band was prepping for the official release of their LP Black and White (the first LP they have released since Totally Jawsome in 2010), coming up at Café Colonial. It’s been a long time coming. Local musician Ted Angel recorded the album in the back of a boat warehouse in North Sacramento almost two years ago.

“I was in my mid-twenties then,” says BOATS! bassist David Hayden.

“I couldn’t even grow facial hair yet,” adds lead guitarist and singer Matt Leonardo.
Why the delay? They would have put out the album much sooner, except they were waiting almost a year for Adeline Records to “press go.” The record company, which is co-owned by Green Day’s Billie Joe Armstrong, initially expressed interest in releasing the BOATS! LP after hearing a demo, and then backtracked.

“They were into it, and Billy Joe Armstrong reportedly liked it, or liked us (I don’t know if he actually even heard the record),” Leonardo says. “We were talking to them, but they were kind of stringing us along.”

“We really wanted to put out [the LP] with them, so we weren’t really looking for other labels,” he adds. “Then we realized that it wasn’t going to happen.”

After almost a year of holding out, BOATS! released the record through Sonoma label Modern Action Records instead. Black and White will be available on cassettes and vinyl, but if you still do CDs (does anyone?), you are out of luck.

Since their beginning in 2007, when BOATS! surfaced from a previous project called the She He He’s (inspired by Portland’s Clorox Girls), the band has rotated several members. Nowadays, though, BOATS! is solid, consisting of core members Leonardo and Hayden, both 27, and newest addition Adam Jennings, 19, on drums.

All and all, Black and White is no more than 12 minutes of quick and dirty punk songs with silly lyrical jabs, like “Smoking Is Cool.”

Then there is the song on the album called “Watch You,” which, Leonardo says isn’t about much of anything except looking into people’s windows as he drives by, just to see what’s going down.

Comedy aside, in all seriousness, these guys claim their love for Sacramento.

“People think that we hate it here,” Leonardo says. “For some reason in Sacramento people just think we’re dicks. And it makes it hard to feel good about yourself at home when everybody says they don’t like you.”

“Sacramento is really big on new bands,” Hayden adds. “We’re no longer a new band, so our 10 minutes is kind of up in the punk rock scene.”

Thus, they tour a lot.

Fortunately, touring is easy for BOATS! these days. Whereas they once toured for two months at a time, broke, now their tours last about two weeks. If a show gets cancelled, it’s not too big a deal, because they don’t spend days driving to get there. Instead of using a tour van, BOATS! will fly to wherever their shows are booked, rent a car and borrow gear from one of the other bands playing the same show.

“Some bands look down on us for doing that, that’s the con,” Hayden says.

Other than occasional flack, there are those rare occasions that make touring rough, like when Hayden got sick during one of the East Coast shows in March.

“I spent most of the night having diarrhea in the shitty bathroom of this punk club,” he candidly recalls. 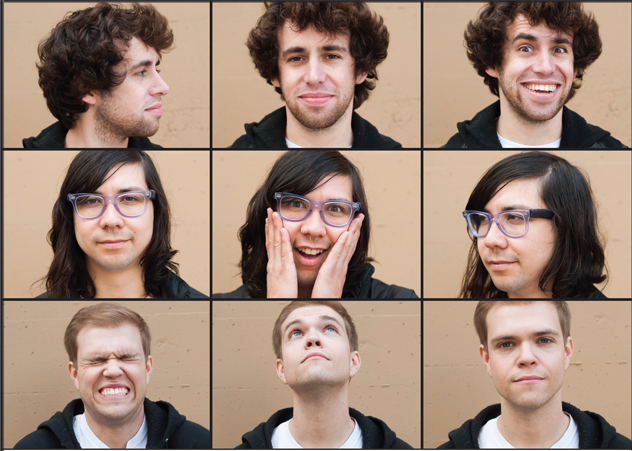 How did you guys get into punk music?
Matt Leonardo: I got into punk music because I got tired of listening to metal when I was like, 12. I was really into Slipknot, and I decided that I liked the attitude in punk more than I liked the attitude in metal. But when I was into metal, it was nü-metal like Korn and Slipknot, so it wasn’t really cool metal like Judas Priest. So, yeah, I got into punk that way. I just kept going, I couldn’t stop.

David, what’s your story?
David Hayden: I was just listening to Green Day, forever. I never stopped. And that’s like, the punk-est band you’ll ever come across. [Laughs.]

Alright.
ML: [Laughs.] She’s like, “bullshit.”
DH: I recently got into Good Charlotte, too. I don’t know if that’s like, punk, but…
ML: And that’s not even a joke. He literally got in my car the other day, and he was like, “Let me put on some tunes, I’m really into this band,” and it was Good Charlotte.

It’s hard sometimes to hold down band members. My impression is drummers are even more difficult.
ML: Oh yeah, you gotta have a good drummer. If you have a drummer that sucks, then [the band] would suck. You might as well not have a drummer at all.
DH: We tried out two other drummers before Adam. If we didn’t find Adam we probably would have broke up.

Especially for punk bands, one of the ways to promote shows has been through posters and flyers, but record stores are dropping off the map. So how are you guys promoting your shows?
ML: Mostly Facebook. I actually just deleted my Facebook because of all the cyber bullying that happens. Social media is kind of the new telephone pole, I guess. It kind of sucks, though… The band is still on Facebook, but I’m personally not on Facebook anymore.

What are you releasing the album on?
ML: It’s on vinyl, and then we’ll have it on cassette. We will not release it on CD. We’ve actually never put anything out on CD except for a CD-R when we first started out.

Why is that?
ML: I don’t buy CDs, I don’t know about you, but I don’t go out and look for CDs anymore. I have a six-disc CD changer in my car, and I have six CDs in there, but I never listen to them. I just put six CDs in there when I bought the car and that’s it… If you are going to put this in the article, then I would say: if you bought the record, and then asked for me to email you a digital copy of the record, I would.

What can you tell me about the new LP?
DH: It’s not as catchy as Good Charlotte.
ML: It’s close though, it’s a close second. We like to describe our music as catchy.
DH: Short and catchy: Our songs don’t go past 2 minutes and 50 seconds.
ML: I don’t think there’s a song on the new record that’s longer than a minute and 10 seconds.

I think there was one that was a minute and 30 seconds.
DH: We like to exaggerate. They’re short otherwise.
ML: If we were playing it live we would speed it up to keep it under a minute.

And that’s because…?
ML: I don’t know, when we play live we just get excited and we just play faster. People got things to do, they don’t have time to listen to a band. So you just got to get it out fast.

They’re not there to really get the full experience; they just want it short and sweet, huh?
ML: Yeah, I don’t know about you but I hate going to a show and the band plays for, like, 45 minutes, and you’re like, “Is this song ever gonna end?” And then they play an encore. For us it’s like, alright, let’s do this. Fifteen minutes, then we’ll get out of here and go grab some food.

Your shows aren’t really 15 minutes, are they?
ML: Sometimes. In the beginning we obviously didn’t have that many songs, so it was probably close to 15 minutes. We could probably do a 15-song set in 15 minutes. We usually do like 30 or 40 minutes [now]… We don’t like to dilly-dally; we’re straight to the point.

And it’s always been that way?
ML: Yeah, I think so. I think that’s what we always kind of aimed for. I think it originally started out because I haven’t always been the strongest songwriter, so it’s easy to write a song that’s first chorus, solo, chorus, and that’s it. That’s like, 57 seconds, and that’s the song.
DH: One thing that people either like or hate about us is, we like to talk more than we like to play music.
ML: We should be stand-up comedians. 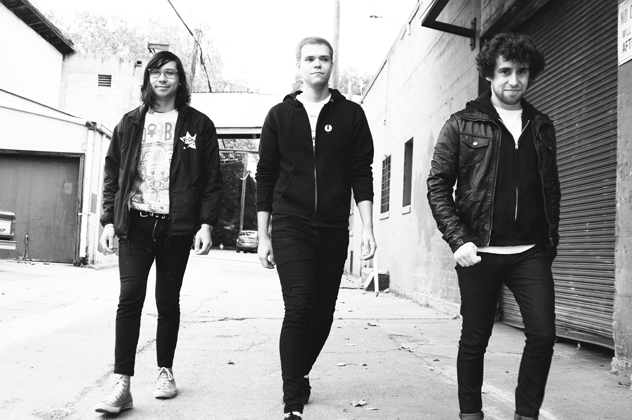 Catch these standup guys at their official LP release show Friday, Nov. 29, at Café Colonial. BOATS! will be joined by The Left Hand, The Barfly Effect, and the Phenomenauts. The all-ages show starts at 7:30 and is $10. For more info, visit Facebook.com/boatssacramento. 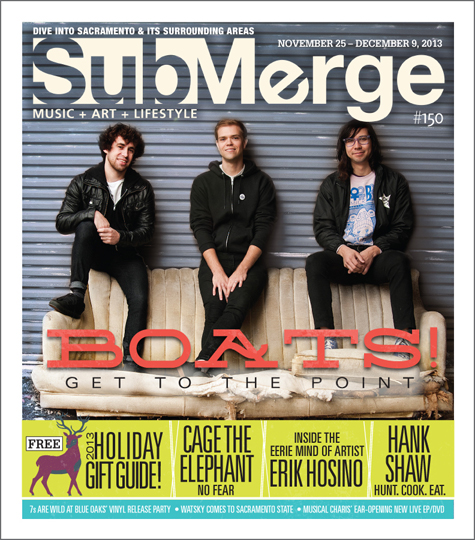