The Mouse, The Desk Lamp & The Scottish Princess 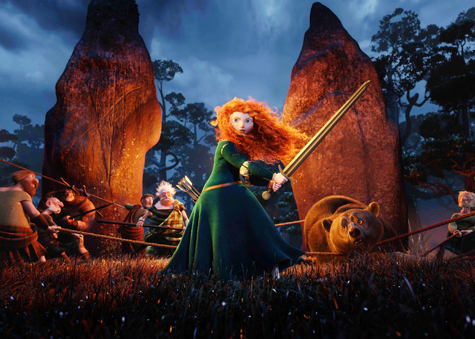 Pixar and Disney seem to have the perfect symbiotic relationship. Pixar, based in Emeryville, Calif., continues to crank out quality, family friendly films, feeding off of Disney’s epic resources and mammoth distribution; and Disney reaps the rewards of yet another noteworthy brand that has to kick up to the Mouse. Over the years, Pixar has created a new crop of characters that have become every bit as iconic as Mickey, Donald and Goofy. The children of today have grown up with Woody, Nemo and Lightning McQueen. Though the two studios feed off one another, there seemed to be a line drawn in the sand. Disney has stuck to fairy tales and fantasy, while Pixar has created more modern stories with equally strong, and perhaps more relevant morals. With Brave, we see a bit of a crossover. This is Pixar’s first fairy tale with its very own princess. Merida, with her tangled nest of red curls and Katniss Everdeen-like prowess with a bow and arrow, is also the studio’s first female protagonist. This may be old hat for Disney–and the movie-going public–but Pixar proves that a formulaic plot doesn’t necessarily have to translate into uninteresting storytelling.

Merida, voiced by the lovely Kelly MacDonald (HBO’s Boardwalk Empire), is a princess, sure, but she prefers not to act like one. She takes more after her brawling brute of father King Fergus (the always hilarious Billy Connolly) than her proper, lady-like mother Queen Elinor (Emma Thompson). Merida’s tomboy lifestyle is fine when she’s a child, but as she grows older, it becomes time for her to forego her quiver and bow for gowns and curtsies. When Merida discovers her hand in marriage is to be offered to a suitable suitor from one of three neighboring clans, the friction between the young girl and her strong-willed mother becomes combustible.

At a loss for what to do, Merida takes off into the woods, where she becomes pixie-led by the will o’ the wisps and happens upon a witch’s cottage. She purchases a spell that will change her mother’s mind about the arranged marriage. The magic works, but not in the way Merida would have hoped. Merida and Elinor must embark upon a quest to reverse the spell and also repair the severed bonds between mother and daughter. 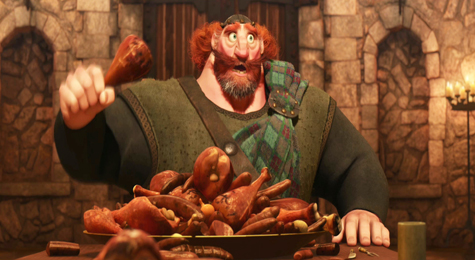 Brave is simple and sweet, both in its plot and its execution. Grand themes such as fate and destiny are given a very human face as they’re played out in the struggles between Merida and her mother. The story isn’t so much darker than what you’d find in Cars or Toy Story, but it does feel a little heavier. Though the setting may be fantastic, there are some very real world things at work here, such as the juggling of desire and responsibility and whether or not one should put their dreams aside in order to achieve a greater good. There is also a great deal of suspense involved during a climactic showdown with Mor’du, the demon bear that once claimed Fergus’ left leg.

It wouldn’t be a Pixar film, however, without plenty of humor. There are some great scenes of comedy relief provided by Merida’s three baby brothers, and gut-busting laughs are brought forth as Merida and Elinor (quite changed from her queenly form) try to sneak back into the castle past Fergus and the clansmen.

What’s missing is the relentless heartstring pulling that was found in Up, Wall-E or the most brutal tear-jerker of them all Toy Story 3. Though the characters are fun and vibrant, and Merida and Elinor are worth cheering for, the real depth of emotion that seems to punctuate most of Pixar’s best work is lacking here.

That being said, Merida fits nicely into the pantheon of Disney and Pixar’s animated heroes, even though she’s an outcast in both camps. She’s neither an anthropomorphic being, nor the beautiful princess yearning for her prince. Merida’s a bit of a misfit, and she probably wouldn’t have it any other way.