Music in the Sun 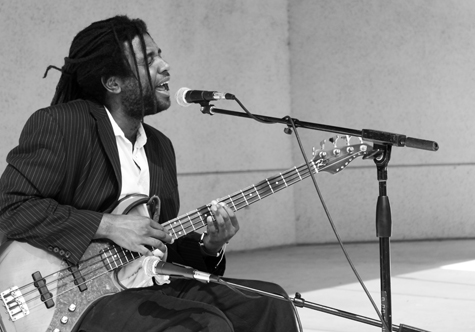 I had only two goals set in mind for my Wednesday afternoon: eat the homemade peanut butter and jelly sandwich that was shoved in my tote bag and listen to the live acoustic jams of Brian Rogers. After finding a shady spot on the green lawn in University Union Serna Plaza, one of my goals was quickly crushed after I found my once perfected sandwich had turned into a strawberry jam massacre. My meal resembled more of a dog’s chew toy than a sandwich. But I decided to try and ignore my lack of lunch and keep my focus on the local talent that was about to take the stage at Sacramento State University.

Unlike other live shows where the stage is packed with sound equipment, instruments and people, this concrete stage only consisted of a chair, a red bass, acoustic guitar and the suited-up Brian Rogers. Although the weather outside was enough to make your back sweaty, the Sacramento musician was well dressed in black slacks, a light pink shirt and pinstriped blazer. And the small crowd of nearly 30 that were gathered in the shady areas did not hear him complain once about the heat. The audience mostly consisted of students, who were caught eating their lunches, working on homework for the next class or who had just walked by to see what the event was. The volunteers of UNIQUE Programs (organizers of the event), all surrounding a table toward the back of the plaza, were patiently waiting for the show to start and reminisced about the joys of summer.

Originally known from the six-piece band Izabella, Rogers was ready to perform solo for the fifth time at Sacramento State. The only items he needed were his guitar, bass and smooth voice. He boldly decided to kick off the first “nooner” of the semester with a Beatles cover of “Don’t Let Me Down.” For any musician it might be difficult to pull off a cover from one of the most popular bands in rock ‘n’ roll history, but Rogers’ acoustic guitar jams flowed well with the familiar song, and he even added a dash of funk to it.

Normally, this song was no laughing matter but one thing did catch Rogers’ eye that made him chuckle in the middle of the song–a giant dancing lunch box and juice box. No, he wasn’t dreaming or hallucinating but was in the presence of the two mascots for the UNIQUE Programs “nooner,” who were showing off their skilled dance moves. The life-size red lunchbox, Lunchy, with human arms and legs, danced to the jams in the middle of the lawn with his partner, a giant yellow juice box named Juicy. At one point during the middle of his improvised set after the mascots left, he asked, “Where’s the big lunchbox?”

Rogers seemed at ease while performing alone on stage, providing a laid-back and comfortable atmosphere. His songs had a Bob Marley feel to them that could have made anyone want to grab an instrument and play along with him on stage. Before he broke into his original song called “Eyeglasses,” he explained that it was about breaking up with someone and leaving all your belongings at their house, especially leaving behind a daily necessity such as glasses.

“I feel like I should have a sense of humor right now, but I don’t have a sense of humor,” he joked before he broke into another song. During his set, the students in the audience had no need to worry about future deadlines, exams, projects or messed-up peanut butter sandwiches but got to sit back, relax and enjoy live music in the sun.