Rebirth of a Salesman 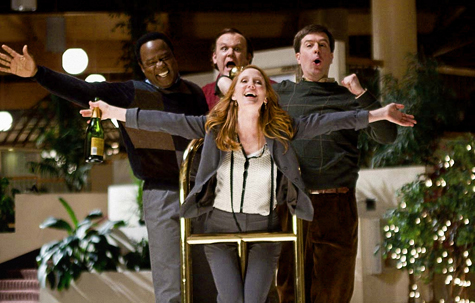 NaÃ¯vetÃ© is an endearing quality. The world can be such a shitty place, it’s easy to cheer for the person who seems to be immune–the person who still believes in things like honesty, decency and love. Of course, as we all know, the world is a shitty place and usually eats people who believe in such things for breakfast. The Office alum Ed Helms steps out from his usual role as a supporting actor and into the spotlight as Tim Lippe in the new comedy Cedar Rapids. Lippe, a stereotypical rube from a small town in rural Wisconsin, is somewhat blind to the dangers of the big, bad world, but he learns about them quick when his career takes him to “the big city” and lands him in serious moral and occupational dilemma.

Lippe is just a regular Joe working for Brown Star Insurance, a highly decorated insurance company. He loves his job and even sees his profession–insurance agent–as a noble pursuit. However, things aren’t as typical as they appear. He’s in a relationship with his middle school teacher (Sigourney Weaver), who, though very fond of Lippe’s wide-eyed optimism, isn’t interested in settling down with her younger lover, or anyone else for that matter. When Lippe’s agency’s top agent (Reno 911’s Thomas Lennon) dies from an injury that apparently occurred during a sexual escapade, Lippe is charged with representing Brown Star at a big insurance convention in Cedar Rapids, Iowa. At the convention, he works to secure Brown Star yet another Two Diamonds Award, which is given to the insurance company that not only exhibits success in the field but also the highest moral fiber. Lippe, as innocent a soul as one can imagine for someone in his thirties, seems perfect for the task, but the trials of life outside of his friendly hometown prove to be quite daunting.

At the convention, Lippe meets up with the well-meaning and honest Ronald Wilkes (The Wire’s Isiah Whitlock Jr.), the hard-drinking Dean Ziegler (John C. Reilly) and the alluring Joan Ostrowski-Fox (Anne Heche). The three team up to jostle Lippe out of his shell. Lippe, who had never even been on a plane before, is intrigued and overwhelmed by his new companions, but as the pressures of the convention mount, they do their part to keep the compassionate insurance agent grounded–more or less.

Cedar Rapids is a classic coming of age story, but instead of teenagers throwing that one last party of the summer before heading off to college, this film gives a thumbs-up to the thirtysomethings. And if it’s true that 30 is the new 20, then Cedar Rapids couldn’t come at a better time. Unlike the characters of, say, American Pie, those in Cedar Rapids have a lot more to lose. They have careers, husbands/wives and children. They most likely have mortgages. Their whole lives aren’t ahead of them; they’re in the thick of theirs. In that regard, the subtle dramatic undertones to the at times over-the-top laughs give Cedar Rapids a heartwarmingly human element.

Make no mistake, though; this is first and foremost a comedy, and a very good one at that. Reilly plays the drunk with chronic foot-in-mouth disease to a T, and Whitlock is fantastic as Reilly’s straight-laced counterpoint. In fact, fans of The Wire (and you all should be) will get a kick out of his few nods to the now-canceled HBO crime drama. Heche seems to come out of nowhere with a great performance as a woman who perhaps married and had children too young and lives for her time on the road where she can be a different person.

Helms, however, steals the show. While his character isn’t too dissimilar from the role that made him famous on The Office, he doesn’t buckle under the pressure of top billing. As Lippe, he excels as the bungling hero, the underdog you can’t help but root for. This could be Helms’ fast track to notoriety in the world outside of the Scranton branch of Dunder-Mifflin; but even if it’s not, Cedar Rapids is still the first must-see film of 2011.