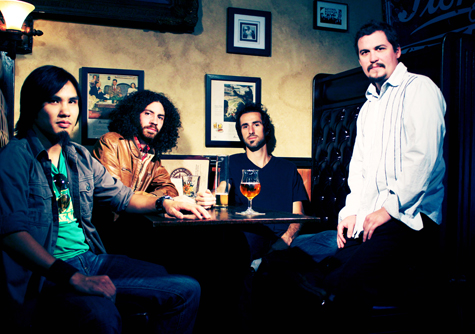 The music business, even on a local level, is tough to break into. It’s cliquish and nepotistic, and like any other field, it’s all who you know. For the patient and persistent, however, the rewards are there. Local hard rock/alternative band Breva, from Folsom, is just now ready to reap those rewards, with the help of some local rock heavy-hitters.

According to drummer John Dutra, Breva has “been a band for six years, but we’ve been playing together for eight or so.” They put out two self released albums–their eponymous, self-recorded full-length album in 2005 and The Great Communicator, a five-song EP in 2007–and in early 2011, they will put forth The American Landscape, a more proper debut full-length. This time around, Breva worked with Simon Says/Rock Inc.’s Zac Diebels, who served as producer, and Far’s Shaun Lopez, who mixed the LP. Dutra says working with these two stalwarts of Sacramento’s rock scene felt like Breva had finally come “full circle.”

“To come and meet that circle, that we’re working with these dudes now, that makes us feel like we’re really doing something good and trying to kick down some doors in the Sacramento scene, which we really haven’t tried to do before,” he says.

Originally, Breva was set to work with only Diebels on The American Landscape, but at their producer’s suggestion, they brought Lopez on to mix the album.

“Zac and Shaun go way back, and they’re good buddies,” Dutra says. “That was kind of [Zac’s] call. It was his suggestion. He said it might be best to get another name on it, give a little more power to it and get fresh set of ears on it to mix. We were totally stoked about that.”

The result is an album on which Dutra says Breva “is coming into our own.” Not only did they get to work with more established Sacramento musicians, but the band also took more of a collaborative and varied approach to its songwriting.

On their last release, Dutra says the songs were generally written by just one person and brought to the rest of the band.

“This one is much more diverse,” he continues. “There are songs that Phong [Ho, guitarist] wrote entirely on his own, and we didn’t even touch them. We just practiced them and recorded them. There are songs that we have that are four years old that we’ve tacked new parts on to and took out old parts and extended parts and twisted parts around. The main point is we’re all super involved in every aspect of it.”

Dutra contributed by stepping out from behind his drum kit and writing a few songs on guitar. He says that he knows enough guitar “to get ideas across,” then leaves it up to Ho to embellish upon those ideas and make them better. Dutra says his proficiency on the guitar also informs his work on the drums.

“I think of myself more playing the drums like a guitar player or a bass player,” he says. “I’m not really a drummer kind of guy where I’m up there shredding and trying to do drum solos and four bar drum fills. I just try to play the song.”

One song that Dutra had a big hand in on The American Landscape was tentatively titled “The Mars Volta.” The title of the song has since been changed to “Paper Is Poverty.” Dutra says he’s got a hit-or-miss relationship with the music of The Mars Volta, but the song is certainly inspired by the work of the group.

“That was one of the last songs we had written out of the batch of 18 or 20, and I had come into the studio one day, and I just did this drumbeat,” he says. “I said to the guys to play something to it, because it was kind of a cool little beat that feels like it’s in a weird time signature, but it’s in 4/4.

“We started jamming to it, and it was tentatively called ‘The Mars Volta,’ because I just stole the drumbeat from that dude,” he admits with a laugh. “I mean, like, lick for lick.”

Imitation is the biggest form of flattery, after all, but Breva’s latest effort probably won’t remind you of the aforementioned prog rockers. The American Landscape certainly contains elements of progressive rock music and perhaps splashes of psychedelia, but the band’s sound is imbued with the sort of energy found in the alternative rock of the early to mid-‘90s. Lyrically, the album is just as hard to define, but Dutra doesn’t mind it that way. From the album’s title and its cover (a political cartoon drawn by Rex Babin of the Sacramento Bee) it could be speculated that the lyrics would have a hard-line slant, but Dutra says that’s not necessarily the case.

“I don’t think all of [the songs] are political,” he says. “I would say that maybe two or three of them are politically driven, but maybe there’s more than that. I’m not too into the politics part, so I can hear a song–unless it’s like Rage Against the Machine or something, where they’re driving it down your throat–it’s not like that to me. I guess I perceive things differently, and I think that’s how Andy [Mills, vocalist] prefers it to be.”

Dutra says The American Landscape will be available in February, but could be pushed back to March. He says the band may release the album digitally at first and then try to shop it around to labels. In any case, Breva seems to have found its place in Sacramento’s rock ranks.

Breva’s The American Landscape will be available early 2011. In the meantime, see the band play Jan. 27 at The Press Club. Show starts at 8 p.m.