Cheech & Chong Are Back 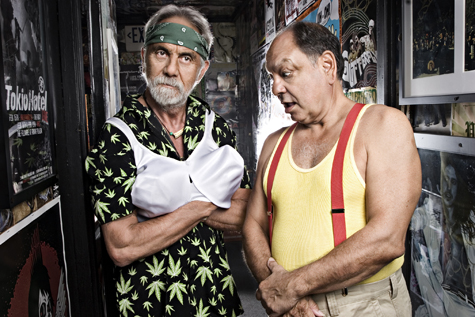 North America in the late ’60s and early ’70s was a dangerous and magical place. War, as well as social and economic upheaval, spun the U.S. and much of the world in a dizzying—albeit groovy—downward spiral. The fabric of human existence was rolled up like good dope and smoked all the way down to the roach. Still, no matter how bad things got, people could still get by as long as they didn’t forget to laugh (and take plenty of drugs); and luckily for them, they had Cheech & Chong.

One part Mexican-American, one part half-Asian and Canadian, the members of the legendary comedy/musical duo met as a result of the tumultuous times. Cheech Marin ventured north from Los Angeles to Vancouver, B.C. in order to escape the draft. There, he met Tommy Chong”¦ And you probably know the rest.

“It was really magical,” Chong says of Vancouver in the late ’60s, “because we were all on acid at the time.”

Whether it was the work of hallucinogens or not, the two comedians overcame their humble beginnings and struck a chord with an entire generation. Through touring, film and albums, Cheech & Chong sang and joked about drugs and the counterculture well into the ’80s; however, they were unable to overcome their own differences. A reunion seemed unlikely, but now the legendary twosome is once again on the road after more than 25 years apart.

Submerge recently had the opportunity to speak with both Cheech Marin and Tommy Chong about their past, present and future—if only they could think that far ahead.

How is the tour going so far?
Cheech Marin: It’s just going great. We’re having so much fun, and we’re playing to great audiences who love us and shower us with baggies of dope.

How about you, Tommy? Are you enjoying yourself also?
Tommy Chong: Well, I’m a little paranoid. Every time someone gives me something, I think it’s the feds trying to bust me again.
CM: I have to take it for him.

You’re thinking about getting a tramp stamp?
CM: [Laughs]
TC: Is that what they call them? This one girl had a tattoo of a seashell on her inner thigh. She said that if you put your ear to it, you could smell the ocean.

A lot of people have compared this time in American history to the Vietnam War era. Since you were active in the counterculture of that time, do you think those comparisons are valid?
CM: The political and economic landscapes are the same. We had a very unpopular president—Nixon—a very unpopular war—Vietnam. The economy was in shambles like it is now. The only difference was the draft. There’s no draft now. That’s what really mobilized the youth in one camp against the war.
TC: You had no choice back then. Now you got a choice. What they do now is dangle those citizenship papers, “You want to get a green card, go get your ass shot at in Afghanistan.” That would make a great recruiting poster.
CM: In today’s economy, it’s a viable job option, you know? A lot of people are going for it.

I’d read an article in Rolling Stone recently that said comedy is like music or anything else; it goes in and out of fashion. But your comedy seems to have a timeless quality. Do you think there are some things that are always funny?
CM: Yeah, I do. I think it’s obvious from the reaction we get to our stage show now. They’re classic bits, and they’re timely at the same time. It’s amazing how they go with each other.
TC: They’re timeless and timely at the same time.

What was it like for you guys to start writing again after being separated for so long?
CM: We don’t so much as sit down and formally write as just the show evolves night after night. We both throw something new in. “Oh, let’s try this or let’s try that.” He’ll say something and I’ll react to it on stage, and vice versa. People who have seen our show when we first started the tour would say, “Oh, they’ve got a bunch of new jokes,” but we hardly notice them, because the show evolves under our feet the whole time.
TC: We use a technique called “Shoot the Rehearsal.” We don’t waste anything. If we’re going to expend energy being funny, then we want to either record, or have someone there to see it; that way, we don’t waste it.
CM: Comedy is a terrible thing to waste. We recycle comedy. That’s what we’re doing. Our act is going evergreen.

Well, that is very timely.
TC: We are very green comics, aren’t we?
CM: We don’t waste them, we don’t use the jokes we can’t use”¦
TC: And we smoke all the green that gets thrown up on stage. We recycle the pot.
CM: Through our lungs”¦

And then back out into the audience”¦
TC: It comes out in the form of jokes.

Just recently, you two played your first show together in more than 25 years, but when I was doing research for this interview, I saw that you were working on a script around the time Tommy was arrested, is that correct?
TC: Yeah”¦I think the universe stepped in and said, “That movie’s not going to work. Let’s get Tommy arrested.” It was for New Line pictures, and thank God we didn’t end up with them. But what it did”¦well, we weren’t ready. It was a money thing and neither one of us were committed to doing it. It was one of those, “Well, if the money’s there, then OK.” But in the end, it had to come from us. We had to make the decisions.

So there were a lot of stops and starts with you guys trying to get back together again”¦
CM: Yeah, there was a lot of that. Something interfered, and it was just not cosmically right, I guess.
TC: The cops call it “hesitation marks.” When you’re going to slit your wrists, there are two or three hesitation marks, and then the big slash. So with us, it was hesitation marks before we finally made the big jump. And now here we are.

Do you guys think this is going to be a regular thing, or do you think this tour is a one-shot deal?
CM: I don’t know. It’s getting to feel like it’s pretty regular [laughs].
TC: It’s like a series on television, you know? You can usually begin to tell a year before it ends that, “Uh-oh, we’re getting to the end.” Because everyone starts losing interest: the audience loses interest, you lose interest, but right now we’re at the beginning of it. The tour and everything else feels really exciting. It’s like people are dying to see us. It’s like Cher or Barbara Streisand’s first comeback tour.
CM: We’re going to do seven or eight comeback tours.

You guys could alternate breakup and comeback tours every other year or so.
CM: Yeah, there you go. It’s all how you market the brand.

Considering your rocky relationship and all your history together, do you think you guys will ever be rid of one another?
CM: Apparently not. It’s like when you have a tattoo, and you go to get it lasered off, you have a scar that’s in the shape of the tattoo. It’s not going to go away.
TC: I did a Shakespeare play with Tom Hanks for a charity thing, and when I got off stage after doing Shakespeare, I had a guy come up to me and had me sign Cheech and Chong albums.
CM: It’s an indelible mark. 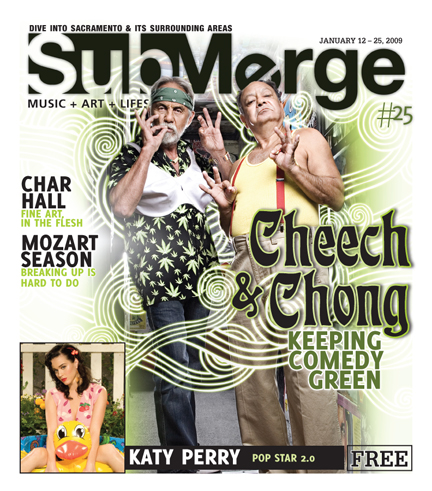