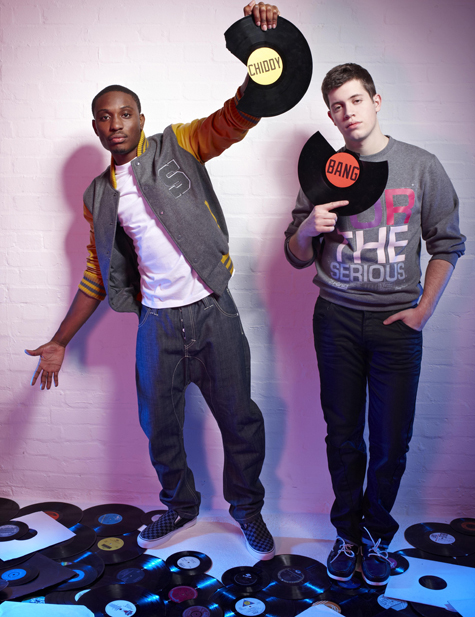 Philly hip-hop duo Chiddy Bang has all the ear-grabbing gimmicks a major label requires and the true skills in rap to not put their credibility at risk. It’s a delicate tightrope the group walks with a casual cool on its critically lauded Breakfast debut on EMI, released in February 2012.

Comprised of producer Noah Beresin, aka Xaphoon Jones, and rapper Chidera “Chiddy” Anamege, Chiddy Bang signed to EMI on the strength of their indie-rock sampling mixtape The Swelly Express. The formula is primed for major success; Xaphoon samples MGMT, Passion Pit, and Sufjan Stevens, while Chiddy plays the role of a modern Fresh Prince (see: clean fun) but it should not be considered a hipster-pandering, blog-friendly gimmick. Nor should Chiddy be treated as a pop rapper. In August of last year, Chiddy broke the Guiness World Record for Longest Freestyle by rapping for nine hours and 18 minutes at the 2011 O Music Awards.

Chiddy Bang’s summer schedule is indicative of the band’s split personality between pop and rap. Back on July 15, Chiddy bang teamed up with legendary Philadelphia pop-rocker Daryl Hall to perform a few Hall and Oates covers for Hall’s critically acclaimed Web series Live from Daryl’s House. Currently, on Wiz Khalifa and Mac Miller’s Under the Influence Tour, the group will squeeze in headlining dates that include a stop in Sacramento before jumping on a late August tour with power pop rockers Fun.

On July 19, the band released exclusively on iTunes a new EP/single, Mind Your Manners, which features a brand new track “Twisted,” and as we learned in a phone conversation with Chiddy, the group’s long-anticipated mixtape Grab a Plate may also see a release very soon. The world record-holding rapper took time from his busy schedule to answer a few of Submerge’s questions. 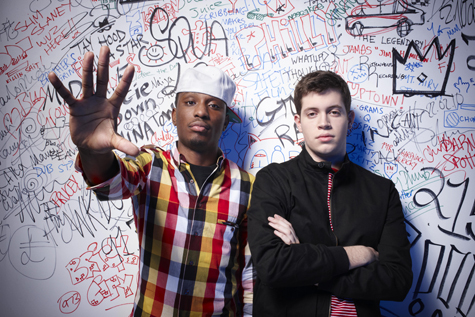 So you just got off stage as part of your debut on the Under the Influence Tour with Wiz Khalifa and Mac Miller. Following this tour you’ll head out with Fun. I imagine the tour experiences will be drastically different. What sort of expectations do you have?
Definitely, man. That Fun tour is going to be a different experience. This is just a strictly hip-hop atmosphere. I was just speaking with Mac a couple seconds ago and I haven’t got to run into Wiz, and I haven’t seen [tour mates] Schoolboy [Q] or Kendrick [Lamar] yet. It’s all love, man. We’re definitely going to blaze many…if we’re under the influence of music, right?

As cool as the fans are, really they are not ready to host you. If they want to host you, it can’t be on campus. I lost a phone. I lost a brother. I can’t even remember what happened that night. Never again.

You’ve almost done the entire late night TV circuit with Conan, Leno, and Fallon performances. Who was the coolest late night host you got to meet?
I would say Conan. His whole show is just filled with comedy, and it’s obvious he’s a cool ass dude.

As you guys got started a lot of the music was based on samples from modern bands. Did you have an issue with any of those bands flat out denying you the sample, either from a stance against sampling or just not liking your particular treatment?
We had one issue where there was a song that didn’t make our record, but we put it out for free. It was a song called “By Your Side.” Basically, the artist that we sampled [Cocorosie’s song by the same title] for whatever reason, they were like nope, you do not have permission to use this song. What we did was say, “OK. Well, we’re going to put it out for free anyway.” You can’t sue us for putting it out for free. It’s not a commercial release, so we’re not making any money off of it.

We’ve been pretty blessed with sampling and sample clearances. That was the only issue, and we still put it out anyway.

On the flip side of the coin, has sampling a band led to talks of collaborating more closely in the future?
We had an Ellie Goulding feature sort of on our album. It was really low-key, though. On the last hook she was just singing under some tracks. That was pretty dope, because we sampled her song “Under the Sheets” and cleared a remix out of it. There was a blog post, too, where she said “Opposite of Adults” was a song she runs to. That was really cool of her, to get on the album and sing.
[Xaphoon Jones also returned the favor to Goulding, by producing her remix cover of The Weeknd’s “High for This.”]

Have you gotten sick of the breakfast-related questions yet?
No, not really. I love breakfast. It’s my favorite meal of the day.

Do you make it a point on tour to scope out the good breakfast spots in each city?
Definitely. Noah is really good at that. He has a list of all the dope breakfast spots in New York City. He knows far more dope spots than I do. Adam Richman [of Travel Channel’s Man v. Food] is a friend of ours. He tweeted us about how much he loves our Breakfast album.

To have someone from the Food Network feeling our album is the like the ultimate for a group that named their album Breakfast. We are talking about ways to collaborate in the future. You never know, we might pop up on the show and cook some breakfast with him or something.

If you’ve got his ear, you might as well try and facilitate something, if only for the food perks.
Might as well make it worthwhile. We’ve been blessed. We’ve had a couple random people show love, like Jonah Hill showed love. He tweeted he was really into the record, and I was like, “Wow, I’m really into every movie you’ve ever made.” Fair trade.

Being on a major label brings the stigma of being more pop-minded. One publication called the record “mainstream hip-pop,” which makes me cringe pretty hard. How do you guys handle labels such as this?
I never entertained what people labeled us. At the end of the day people can never understand what it really is. They don’t know what kind of music we’ll make next. Breakfast is the first offering, the first on the menu. There’s many meals to come, and I’m not really worried about people calling it mainstream hip-pop. I think it’s very much rap. It’s very much spitting and my man Xaph is very much into producing and coming up with dope beats. We’ve just got to keep creating and vibing. Everybody else can talk since it’s their jobs to talk, right?

That’s how they get paid, right? They got to make money and put food on the table.

After breaking the freestyle record, how long of a hiatus did you take before you felt like you could freestyle again?
Man, I took like a four-month freestyle break. I was tired of doing it and everybody asked me to do it, but it was just played out. Don’t ask me to do it, and if you do, I’m just going to pass it off to Xaphoon. That’s how it’s been.

Xaphoon can freestyle well enough to take the reins?
Being around me he picked up a couple things. He got a couple tricks up his sleeve.

I read that after you broke the record, you didn’t talk for around an hour or so.
I couldn’t talk, man. My mouth was burning. I was so exhausted, not even talking all day, but rapping all day. The top of my lip was burning. After nine hours worth of rapping that will happen.

What’s the status on the Grab a Plate mixtape?
That tape, we were working on it, but then we had to take a break off of it to do the Breakfast thing. We’re back at it though, working on completing it. We’re thinking of changing the title, but it will still essentially be Grab a Plate. We’ll know within the next couple days what we’re going to do with it. We’ve got a studio on the bus to work on it.

You heard it here first. Mixtape at the end of August. Let’s do it.

That will be around the time you hit Sacramento.
Exactly. We’ll debut some new tunes. You already know.

That’s going in print, so we’re holding you to that.
Alright, brother. Appreciate it. We got you. 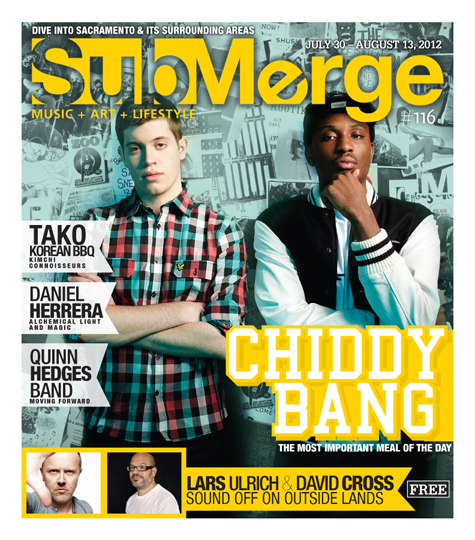 Chiddy Bang will take the stage at Ace of Spades in Sacramento on Aug. 21, 2012 and doors open at 7 p.m. K-Ottic, Brodi Nicholas and J. Sirius are also performing. Tickets are $20 and can be purchased through http://aceofspadessac.com/.