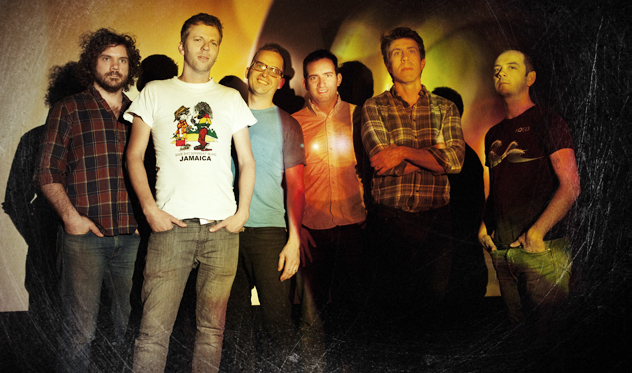 Long-distance relationships are rarely successful. Dance-punk band !!! (Chk Chk Chk), whose six members are spread out between Sacramento; Brooklyn, N.Y.; and Pittsburgh, Penn., have somehow figured it out. When you share a passion for something as strongly as these gentlemen do, you make it work. That passion? The love of a groove. “The focus for the band has always been about a feel and a groove,” guitarist Mario Andreoni tells Submerge while sipping coffee on a park bench in Cesar Chavez Plaza in downtown Sacramento. “Usually everything is started from a bassline and/or a beat. That’s what brought us together and that’s what has always sort of stoked the fire.”

!!!’s fifth album, boldly titled Thr!!!er, was released on Warp Records in late April. And while it shows a great progression in the band’s sound, which is in no small part due to working with Spoon’s drummer/producer Jim Eno, Thr!!!er still has !!!’s rump-shaking, dance-floor-burning, signature groove. It is much tighter and more focused overall than their 2010 release, Strange Weather, Isn’t It? There are more catchy, sing-along moments on this record, too, namely in the album’s opener “Even When the Water’s Cold” and on closer “Station (Meet Me At The).” Whereas with !!! albums before, it might have been more about the groove, vocalist Nic Offer really stepped up his game on this one, offering listeners vocal lines and melodies to really latch onto. The Guardian couldn’t have said it any better than they did in a recent article on the band, stating, “The thing is, Thr!!!er kind of is !!!’s Thriller, inasmuch as it’s their best album.”

When Submerge met up with Andreoni, he was only in town for a couple days, just back from gigging in the United Kingdom and on the verge of meeting up with the rest of the band on the east coast before embarking on a U.S. tour. That tour will bring them back to Sacramento on Friday, May 31, 2013, to headline Concerts in the Park, a gig the guys are looking forward to very much. “Even with playing New York, Los Angeles, all these places, this gig is one of the ones I’m most excited about,” Andreoni said, just as a homeless guy barged in on our conversation, choosing our bench to sit on even though the park had plenty of empty seats. We laughed, walked to our cars and said our goodbyes.

Read on to learn more about !!!’s best album to date, how they make the long distance thing work and why they value space in music.

You guys have made the long distance thing work for so long, is it even something that you think about anymore?
No, I haven’t felt that it’s been a problem, per se, for a good eight or nine years. I think that maybe after the guys first moved over there, we were kind of thinking this is a hassle. We had just started working on the single that sort of put us over to more of a national audience, the “Guiliani” single. We had started working on that here and then everybody left and we were kind of like, “Well, what are we going to do with this? We have to finish it.” I kind of flew out there on a lark and for some reason the momentum just seemed to carry. We played a lot of shows…some really great shows out there. We just thought we’ll see how long this works. Touring has been a big part of it, since they live there and I live here, we can rehearse on either side. Everybody always has just made an effort to do whatever we can to maintain this connection.

It seems like it keeps things fresh. As a band, you’re never really stagnant or in one place for too long, right?
When we all lived together here when we started the band and we had various bands that we were working with, there was always a tendency for practice to get cancelled because so-and-so has to do this-or-that. There’s no question the band would be different if we were rehearsing three or four times a week in the same city.

Who knows, we could have broken up a long time ago. I wouldn’t start a new band in this configuration right now, but it’s been what I’ve associated with this band forever. Once we all get together, it only takes like 10, 15 minutes. We’ve been able to keep in pretty constant contact. I really don’t go more than maybe a couple weeks without talking to anybody. We’ve been friends for a long time.

One thing I notice and appreciate about !!! is all the open space in the music. Not everyone is doing everything all the time. As a guitar player, is it ever hard to hold back from writing even more riffs to go over all that groovy stuff?
I think any effective dance music has a big sense of space. I’m always conscious of that. I’ve never really been a guitar player that’s wanted to sort of like get choppy, it’s just never really been my style. I really want to benefit the song and the groove as much as possible. I value the sense of space. Even as a guitar player, there are certain things where you can really kind of pick your spots and be heard even a little better versus people just going all out all the time. It suits my personality and this band to sort of contribute more to the overall aesthetic. Just as someone that listens to a lot of groove and dance music, having the bass and drums be the primary focus is what I love. The people that I sort of emulate were people that really knew how to sit in the background and knew how to work rhythmically with the band.

How was it working with Jim Eno on the new record?
It was really gratifying. Jim was very seasoned. He’s made tons of records. We just hit it off and he pushed us in new ways that we’ve never been pushed before and challenged things. Where we might take a groove and say we’re going to do this over the course of seven minutes, he would always be asking, “Why are we doing this?” I’m sort of paraphrasing him obviously, but he forced us to look at things differently.

Are there certain songs on the record that have more of Eno’s touch than others?
I think all the songs he did, which are the majority of the tunes on the record. The one thing we loved about Spoon was that it was a rock band that really had a sense of space, like we were talking about earlier. So we kind of trusted him with that.

I think the whole allowing and enjoying more space in music thing might come with getting older and being more mature. Younger musicians tend to want to play louder and want their parts to be heard more, you know?
Right. It’s ultimately about the song. Jim got us to focus on the song. That was something that was at the forefront every day when we were working together. Coming in with our demos and things like that, we had to really distil things down to, “What makes this the best song?”

Tell me how you guys settled on the name Thr!!!er.
Constantly we’re tossing around ideas. We do a lot of riffing. A lot of the stuff we come up with is kind of funny, or at least we think it’s funny. It was one of those things where we knew we were going to have to come up with a title, so we were always just rifling off. Nic had written it down; literally it was one of those things where writing an idea down on a napkin made me go, “Well that looks fucking cool.” The whole other part of it, the sort of folklore behind Michael Jackson’s Thriller… We’re all fanatics of music. We know the cultural significance of his record. But at the end of the day I thought it looked really fucking cool. I thought it was a good idea then and I still really love the title. Aside from it maybe seeming like we’re taking a piss, which there’s some of that to it, as a statement I do think that this is sort of our most varied record. Michael Jackson’s Thriller is a varied record. We talked a lot in the studio, like, “What’s the folk-rock Thriller? If Thriller was the pop/R&B Thriller, the actual Thriller [laughs], how can you apply that sort of significance across other genres?” It really just kind of all fit together.

As a longtime fan of the band, I’ve often found myself asking, “Why haven’t they blown up? Why don’t more people know about them?” But then I’m like, “I’m glad they aren’t huge, I can keep them to myself!” Have you encountered that a lot?
Yeah, and coming up as music fans, we’ve shared that. Discovering Sonic Youth and Nirvana when you’re a kid or whatever and thinking, “This is a cool thing,” and you want to keep it as a cool thing. How people perceive our band, whether or not they do it that way, it’s fine with me. I guess I’ll be somebody’s cool thing. I think that we’ve strived to sort of push it across to as many people as possible. While that’s not necessarily our goal, it’s certainly not lost on me that a big segment of our audience is that way. I know people that share that sentiment, like, “They should be bigger,” or this or that. Because we love doing this so much, as long as we can keep playing to more people, it’s something that we still really have a lot of fun doing. I try not to get too locked into our popularity-buzz-ratio-output thing. There are other people that can worry about that.

I think the keyword there is fun. I can tell you guys still have fun and your music is fun to listen to and to dance to. I can’t imagine, for example, that you went into this record thinking, “This is our make it or break it album,” you know what I mean?
I haven’t felt that way. As a musician, anytime you put something out you want to show it to people and say, “Hey check this out, listen to this, this is what I did, this is my band.” You’re always wrestling in a band with multiple people weighing in on things. You want to be proud of it. Every time you start a new record, you want to come away with something that you’re proud of. I feel very proud of this record and what we’ve done. The goal from the start of the band has always been to create this swirl of energy. When we’re playing there’s this very visceral thing that happens. It’s important for it not to come across as being forced. It’s not forced. In some respect we’re not careerists like that. It’s still ultimately about creating that swirl of energy. Some days it doesn’t happen, but fortunately more often than not it happens and it’s really, really gratifying.

Catch !!! live for free on May 31, 2013 at Concerts In the Park, held every Friday during the summer at Cesar Chavez Plaza. Their new album Thr!!!er is available now online and at record stores worldwide. For more information, visit Chkchkchk.net. 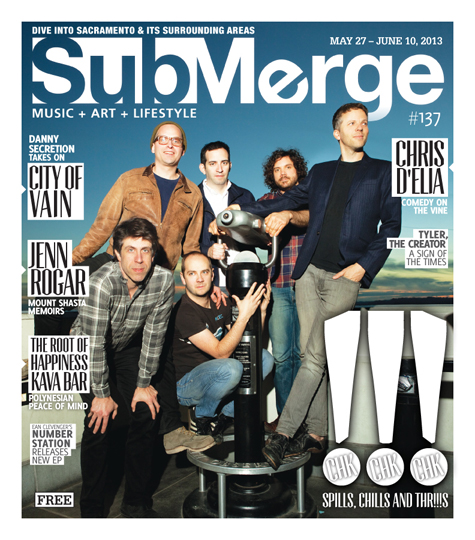