So, Chris Robinson called me. Usually when these sort of interviews happen via phone, a publicist calls as a sort of intermediary. The press person will call me, then connect me with whomever I’m scheduled to interview. However, this time around, the enigmatic vocalist who most famously fronted The Black Crowes contacted me directly. As a child of the ‘90s, I was understandably stoked.

He was referring to a line in the bio for his latest music endeavor, Chris Robinson Brotherhood, which states that the band self-identifies as a “farm-to-table psychedelic rock band.” It’s meant to be “tongue in cheek,” Robinson says during our interview, but listening to the band’s latest album, Phosphorescent Harvest, it sort of makes sense. The album opens with the fuzzed-out, spacey-yet-soulful rocker “Shore Power,” which sets the tone for what is to follow without setting up a clear road map. Terminating with the sprawling, atmospheric, aural trip that is “Burn Slow,” Phosphorescent Harvest is sort of like driving cross-country: You traverse across wildly different terrain that nevertheless shares common bonds—it’s all connected.

Phosphorescent Harvest, released April 29, 2014, was recorded in 2013 with producer Thom Monahan. Whereas CRB’s first two albums were pretty much recorded live in the studio, this time around, the band went with a more classic “studio album” approach. However, since Robinson and company were busy elsewhere, the band members would go to the studio for a few days whenever they were available to record.

“Neal [Casal, guitars/vocals] was working and playing with Phil [Lesh] and doing other stuff, and then he’d come in and do four or five days in the studio,” Robinson, who toured with The Crowes in 2013, explains. “The Crowes would have a break, Adam [MacDougall, keyboards/vocals] would be sleeping in the studio and doing his thing for six days. When I came home, I would head over there. It worked as a collective. It was loose like that.”

Despite that, the album boasts a coherent and cohesive sound, something Robinson takes great pride in.

“When you hear it at the end, what I was super surprised and happy about, it sounds as live as it was when we cut it on the floor,” he says.

Robinson co-wrote much of Phosphorescent Harvest with Casal. Though Robinson garnered much of the songwriting credits on CRB’s previous albums, he says that Casal’s contributions to the band’s songs have been invaluable since the beginning. In Casal, Robinson says he’s found a songwriting partner who helps temper his own “kinetic” energy.

“Writing partnerships are funny. In great songwriting partnerships, the people are very different, I think. They’re almost really opposites,” Robinson says. “I might not write a song for a month, and then all of sudden there are four or five of them laying around. Neal is really amazing because he’s more calm and collected. I appreciate his approach, and he appreciates mine. Neal can take the best of the creative outbursts that I have and put them into context so they’re not just manic.”

In the following interview, Robinson expands more upon the writing of Phosphorescent Harvest, explains why The Black Crowes were the best and worst of times and talks about how music helped a weird Southern boy cope with his surroundings. 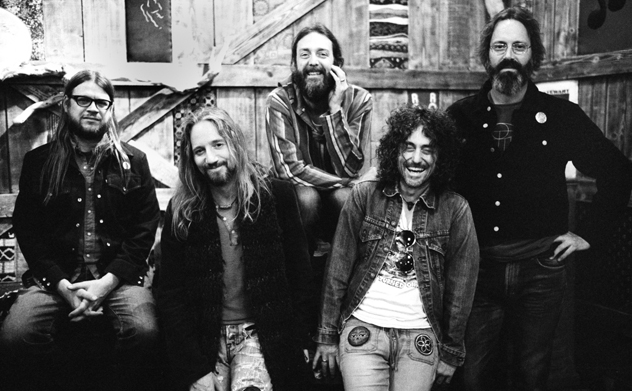 Why do you say CRB has a farm-to-table vibe?
We’re Americans. I have kids and a wife. I want my family to be happy, but how does that fit into the context of joy, happiness, music and a soulful sort of place?

It’s not militant or anything, but I do think that once you start to remove yourself from the trance culture of status, greed and fear, and you start to wake up and realize, well, the sun is still shining. You’re saying I can go to Harlow’s and be a part of something that’s not like everything else people have been trying to sell me? I don’t think these were conscious decisions. The Black Crowes were a Charles Dickens novel. It was the best of times; it was the worst of times [laughs]. It’s just true. Granted, dynamic experiences enhance those kinds of extremes. But I learned a lot. As I’m moving into my 50s—I’m 48 next month—it’s the same thing with my family, my band, my music and everything. I want to be in control of these vibrations. When I say “I,” I mean “we.” This band is a family. We look at it that way. We own a little family hardware store in a world of Wal-Marts, but we hold the leash in our hands, man, you know what I mean?

I’m a vinyl junkie. I like going to record stores where people know a lot about their records. I know a lot about our presentation, and that’s really all we can control. That’s where our energy is, and all this music and vibes are coming from.

You said your time with the Crowes was the best and worst of times. Do you think that those extremes are what made the music so memorable for people?
I think in a romantic way, and I definitely think in a youthful sense, yes. We were very young when all that stuff started happening with Shake Your Money Maker. I think part of your youth is your lack of perception of things. Since you haven’t had the experience, you throw all that same energy and all that stuff into your anger and frustration. The Black Crowes, although we never represented anything negative or violent, we were definitely not afraid of the anger of youth.

It’s funny now, man, looking back to the ‘90s, we were this band talking about drugs and marijuana legalization, we were on lists back then, you know what I mean? CRB played in Oakland on a 4/20 event, and some dude in the audience yelled out, “four-twenty, man!” and I said, OK, I dig it, but remember, some of us here are older. We used to be outlaws, now we’re patients.

I don’t know… The Black Crowes, man, part of that is the same reason why I don’t want to do it. The worst imaginable thing to happen, like some Kafka novel, would be to wake up and [I’m] 24 again. Oh my God!

I know that feeling…
I’m serious! I guess there are some people who didn’t get the adventure or the life they expected or thought [they’d have], they’d be like, “I’d love to be 24 again.” Not me, man!

I read an interview with Neal, and he said that it was the most complex and psychedelic album you’ve ever done, but the songs and vocals were never compromised. Was it difficult to strike a balance between staying true to the framework of the song but still adding all the layers you wanted to?
In this kind of music, that kind of framework is a really light sketch. In this scenario, like you said, the song is the song, the melody is the melody, the imagery is the imagery, but…the soundscapes and the colors and textures we can use, that’s something that changes and grows as you’re putting together the record. All sorts of changes happen.

It sounds like you were working in reverse with the first two albums. What I mean is, you took the songs you were already playing on the road and then committed them to tape, but this time around it sounds like they were born in the studio. Is that what happened this time around?
Pretty much. There were a few of those songs we’d played: “Meanwhile in the Gods…,” “Jump the Turnstiles” and “Badlands.” We’ve only been a band just getting into the end of our third year. When we write a new song, we like to add it into the repertoire. Some of those songs, like “Shore Power,” we’d had, but didn’t play for anyone. But other songs like “Burn Slow,” I had the verse riff and that weird sort of epic Freudian middle section, and Neal put together all the other stuff…that real trippy part where you break out and you’re in a meadow somewhere, that was something I thought of on the way [to the studio], because I hadn’t even finished the lyrics. A few hours later, then you’re like, “Where did this come from?” We didn’t know what to do with “Burn Slow,” because it was sort of nebulous. We liked the vibes, and we liked the mood, but it wasn’t really a song yet. You never know. That’s what keeps me interested.

We live in a time when people, seemingly, go on TV and are like “Vote for me in a talent show.” I started writing songs because I was a fringe element, and writing songs kept me involved with people and not getting too out there, not getting too depressed, not getting too overwhelmed. The one way I could keep afloat as a strange adolescent person in the Deep South was music. That’s a sincere place to begin, like, wow, the songs helped me figure out what’s going on with me.

You mention being a weird kid in the Deep South. You and CRB just toured there in late October. What’s it like going back there for you now?
I love to visit. The weirdos in the South, or anywhere you go, make traveling worthwhile, and the South is a unique place. My family has been Southern for hundreds and hundreds of years. I see the world through Southern lenses. But it’s also funny, because you tour all around, and the only places other than West Coast, especially California, that people will dance all night on a Tuesday night are South Carolina, Alabama and Georgia. I wish it was less alcohol-driven, but they’re still having a great time! When I’m there, it’s nostalgic, and I’m not a very nostalgic person. I still love barbecue, and I still have great friends there. For me personally, music was a way to release myself. I wanted something different. My DNA was ready for California. That’s happened to millions and millions of people, and that’s the beautiful thing about this state.

Was California everything you’d thought it would be when you first moved out here?
Everything has good and bad. Different times, different things. When I was young, and it was the whole rock star part of life, Los Angeles was cool because I never was a giant. I mean, shit, we sold millions of records, I was on MTV 18 times a day. People recognized me and all that stuff, but then Michael Caine would be in the restaurant, you know what I mean? There was a weird level of being anonymous in Los Angeles. Like, if you don’t cater to celebrity culture and lifestyle…like, I was at the taco stand on La Brea at the car wash, I wasn’t eating at Spago. When I moved out here, I was 24 years old, still. It also had a lot of stuff that wasn’t available in Atlanta in terms of rock ‘n’ roll lifestyle choices.

Chris Robinson Brotherhood will play Harlow’s in Sacramento on Dec. 2. Tickets start at $25 and can be purchased through Harlows.com. If you’re up for a road trip, CRB will also be playing in nearby Nevada City at Miner and Foundry on Dec. 5 and not-so-nearby Chico at the El Rey Theater on Dec. 6. More info on those shows can be found at Chrisrobinsonbrotherhood.com. Groovy! 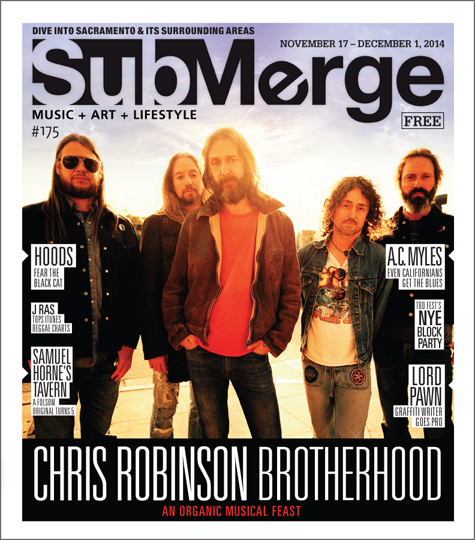