In the oftentimes adversarial landscape of hip-hop, an original voice can be seen as a call to arms, a middle finger in the face of the status quo, an all-out attack on popular taste. Those at the very edge of the vanguard, like the distortion-heavy Clipping, are sometimes met with an outrageous set of expectations from fans and journalists alike.

A few days after their debut, Midcity, was released last year, the Los Angeles-based trio (MC Daveed Diggs and producers Jonathan Snipes and William Hutson) abruptly began receiving major write-ups in international publications such as The Guardian. At the same time, underground hype took on a life of its own, stirring up the music blogosphere at critical junctures like Decoder Magazine and the one-man YouTube show The Needle Drop. The comment sections of every post across the Web tended to run deep and divisive. Who was this “Clipping?” Why were the MCs swaggering party rhymes accompanied by high-frequency sonic projectiles from some as-yet-uninvented riot dispersal cannon? Were they high-concept? Low-concept? Were they being ironic? Were they…oh no, not the dreaded H-bomb…Hipster?

One easy way to piece together the disparate strands of Clipping’s DNA is to visit their Tumblr account, where you will find a comprehensive digital museum of rap videos ranging from the instantly recognizable (Nelly, Lil Wayne, J Dilla) to deeper cuts from classic gangster icons (UGK, DJ Quik, Young Lay). Interspersed among these are experimental tracks from Merzbow, ‘60s bebop cuts from Sun Ra, house singles from Frankie Knuckles, and popular tunes running the gamut from Nine Inch Nails to Madonna. If anyone exemplifies the ability to be both eclectic and uncompromising, it’s these guys.

After a few pages of scrolling, your preconceived notions of the group begin to melt away, and you begin to discover some of the truths at the heart of the Clipping project. They are not hipsters, punk-rockers, high-concept gimmickers or genre-hating ironizers; they are true music lovers, in the most voraciously omnivorous sense. Their shared love of everything from Auto-Tune to ear-shattering feedback is helping to inform their unique sonic fingerprint and put new flavors of music on the map. The further you slip into the Clipping universe, the more you’re able to see how the catchiest club rap single can sound like a multi-layered avant-garde masterpiece, and how an hour-long noise installation can sound like your favorite summer jam.

Unsurprisingly, most Netizens spent more time trying to supply the answers than ask any questions. Clipping was immediately taxonomized into a narrow pop-up genre dubbed as “noise-rap” or “noise-hop.” They were compared endlessly (both favorably and unfavorably) to other adventurous rap acts like Shabazz Palaces, B L A C K I E and Sacramento’s own Death Grips. It seemed that people needed Clipping to be part of a movement, and debated endlessly on whether the group existed in a “post-Death Grips” or even “post-Yeezus” landscape. Before anyone realized it, however, a post-Clipping landscape had sprung up, like an industrial, chrome-plated ghetto on the edge of the city; and even if few people understood it yet, two things were quite clear: people were listening—and people were talking.

One year later, Clipping is gearing up to tour for their sophomore full-length, CLPPNG. On the new album, the group seems to be pulling in the reins of their image, diversifying their sound and collaborating with a stellar roster of figures relevant to classic and contemporary hip-hop (King Tee and Three 6 Mafia’s Gangsta Boo are just a few of the big names). The production is more dynamic, the lyrics are sharper, and the impression given is that of three dangerously creative minds just beginning to stretch out for the long run. If last year’s Midcity was a scorching lightning strike that confounded yet transfixed the listener, then CLPPNG is the following rumble of thunder: deeper, more deliberate, but still as frightening as ever.

On the popular front, heads continue to turn, aided by a wave of goodwill from upstart home-based music addicts to veteran industry taste-makers (a recent inclusion on Rolling Stone’s “Top 10 New Bands You Need to Know” is yet another high point in the buzz). Following a whirlwind tour through Russia and Spain, Clipping will be making a Sacramento appearance on June 30 at Midtown’s rising epicenter for all things independent, The Witch Room. They will be accompanied by distinguished Sacramento rapper Signor Benedick the Moor and local breakcore act Vankmen. As a prelude to the big event, we grabbed a few moments with Diggs, Snipes and Hutson to engage in some real talk about style changes, the hype factor, and the love, appreciation and indebtedness the three have to the one source nobody expected: contemporary hip-hop. 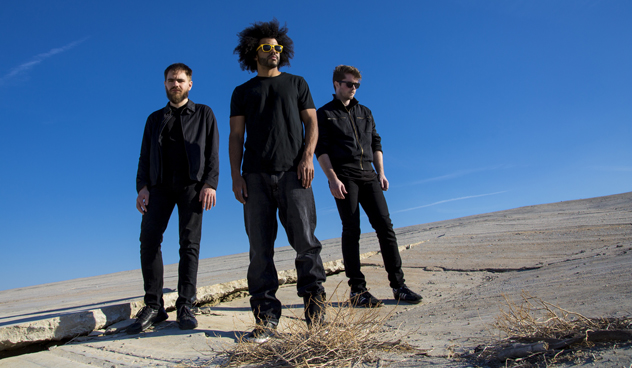 So, looks like your very first tour stop back in the United States after Barcelona is Sacramento! What lured you guys here?
Jonathan Snipes: It’s very hard to tour the West Coast without hitting places twice… This worked out because we wanted a stop between L.A. and Portland. We didn’t want to play two Bay Area shows.

By any chance are you familiar with our Sacramento hip-hop scene, old or new?
Will Hutson: The older scene—C-Bo, Brotha Lynch Hung… I mean, they’re all still out there, putting out albums…
Daveed Diggs: Doey Rock, I remember…
WH: T-Nutty!
DD: Dahlak Brathwaite, I know that cat… I know my Sacramento hits.

I wanted to talk about labels, because it seems to be an issue that keeps following you around. Many bloggers are trying to assign you a particular label like “noise rap,” or figuring out whether you exist in a “post-Death Grips” or “post-Yeezus” world. Does anybody engage with you guys in terms of your old-school influences?
WH: Not really… We try to talk about that stuff as often as possible in interviews, but you’re more or less the first person who’s brought it up… That’s one thing I’ve been seeing a lot in the press for us—“post-Yeezus.” It’s like, “Look that shit up!” Our album came out like eight months before Yeezus did, man! Come on!
DD: Yeezus is post-Clipping!
WH: I understand the journalistic impulse to label something, make it seem like it’s part of a movement, seem like it’s new, like it’s of the moment. Obviously, we started out super-disconnected from anything like that. We were already a band when that first Death Grips release came out. People started sending us that, saying, “Hey! Some guys beat you to the punch!” And then we felt like it didn’t really sound like what we were doing anyway, so it didn’t matter. We thought we were making this project out of our influences, that, to us, were really sort of old. We were putting ourselves in this lineage, this trajectory, and this history we were very conscious of, not necessarily with any idea that it could be labeled as particularly new.

Between you and Death Grips, do you see that your fan bases sort of coalesce?
WH: Absolutely. We have a lot of fans who found us because they like Death Grips—or Death Grips sort of primed an audience that has come to us since then. I do appreciate the fact that they opened some doors in certain populations of listeners who very quickly took to us as a result of what Death Grips was doing. That’s fine with us. What’s that we were joking about at our marketing meeting at Sub Pop? I was saying something to the label and the A&R guy ended up drawing a little Venn diagram of it but it was like “People that come talk to us at our shows are either wearing Odd Future gear or Death Grips shirts,” and our fans were the little overlapping sliver in between.

About Midcity—you guys mentioned in other interviews that you didn’t expect anyone except you guys to really understand it or like it. In light of that, how fast did the widespread buzz and fandom start to trickle back to you? How soon did you start to notice it had a much wider appeal?
DD: Pretty fast. I think some things happened right away that were pretty surprising.
WH: It seems pretty minor now, but I remember we were so shocked by even the first couple of weeks of downloads. We just expected maybe 15 downloads, but there were a couple of early press pieces that we got really excited about.
JS: I think The 405 might have been the very first one? And then The Guardian piece happened like the first day after Midcity was released. I knew it was different. I hit upload, announced it in a couple of places, and within about—I don’t know—two hours? I already got an email from a manager wanting to know if we had management, and I had never, in 12, 13 years of making music and putting it on the Internet, had ever been reached out to by any kind of music management ever. And so I was like, “This is different, somehow. People think that there is something here.”

It seems like you had a very particular palette of sounds on Midcity. Would you say you switched it up a bit for the new album?
DD: I think the new album covers a wider spectrum of sounds. We sort of continued where we left off in a lot of ways, but we also had a little bit more budget and we had resources that we didn’t have before. So were able to think bigger and reference a wider sound palette and pull in new things that we didn’t really have the opportunity to before, because we didn’t really have a strong enough idea of what we were doing at the time, or the resources to do them.

How do you deal with the misunderstanding some people have when they assume you must be opposed to mainstream rap? Do you feel that people that love your stuff tend to hate mainstream rap, but then go on to discover your influences because of you guys?
WH: I hope they do, but there’s no right or wrong way to like a band, and we appreciate anyone who likes us whether we understand it or not. We just tell people if you want to come up to us at a show and talk about how much you hate Lil Wayne and Nicki Minaj, we just politely say, “Actually we like them, but thanks for your interest.”
DD: Yeah. However people come to it is great, and I think Will sort of between us grumbles sometimes about one of the kinds of fans we have but at the same time, they’re great, they’re out there listening to us.
WH: The new album we were very specific about putting three of our big influences on the record who are very much in that world of rap and gangsta rap and are not “blog-y Internet hipster noise rap” or anything experimental at all. This is who we like, this is who we hope you go check out if you like us.

Mark your calendars and come check out Clipping on Monday, June 30 at the Witch Room, located at 1815 19th Street in Sacramento, with Signor Benedick the Moor and Venkman. For more info, go to Witchroomsac.com. Clipping’s new album, CLPPNG, is released as of June 10, 2014 on Sub Pop. 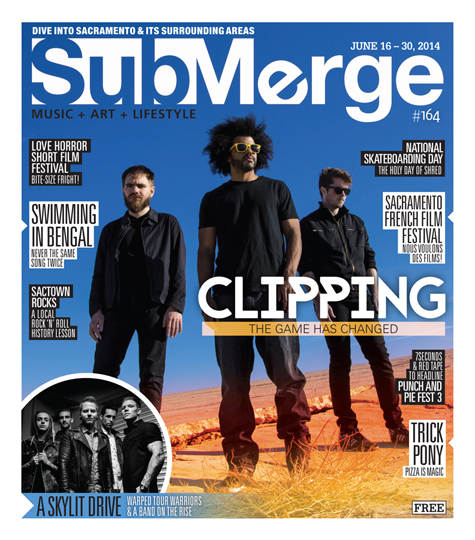