It was 7:20 p.m. and already smoky inside ARCO Arena (not from a fog machine) when the stunningly beautiful R&B singer Keri Hilson took the stage wearing a sexy little black outfit. Hilson’s debut album, In a Perfect World, debuted at No. 1 on Billboard’s R&B/hip-hop album chart last week and made its way to No. 4 on the Top Album chart. The smash hit single “Turnin’ Me On” has been on top of the Urban Radio Charts for over six weeks, so it’s no wonder why the crowd was so excited to sing along when she busted into the song at the end of her short but energetic set. After a round of thunderous applause, Hilson scurried backstage to continue partying, saying she was in a “Celebratory mood,” presumably because of her recent success.

Gym Class Heroes took the stage next and completely changed the energy in the building with their full-band set up and non-traditional indie meets hip-hop sound. Two jumbo screens, one on each side of the stage, were turned on, giving those in the nosebleed sections a much clearer view of frontman Travis McCoy doing an incredible job getting the crowd involved. He briefly poked fun at his celebrity ex-girlfriend Katy Perry and got a good laugh from the audience right before going into their hit song “Cupid’s Chokehold.” “Take a look at my girlfriend, ’cause she’s the only one I got.“ Oh, the irony! Before the end of their set McCoy confessed his love for Sacramento claiming that Deftones are one of his “favorite bands ever.” The band closed with the song “Cookie Jar,” a very dance-y, synth-riddled number that got the entire crowd shaking their stuff.

As T-Pain was set to take the stage, it was apparent things were about to get crazy. Everyone was on his or her feet and the props on stage had a very circus-like vibe to them. After all, T-Pain is knows as “The Ringleader,” amongst his peers (take that, Britney Spears). As the first song started, the crowd erupted and two white-masked little people ran out and started doing the “two-step” dance alongside T-Pain and his other back-up dancer. It was quite entertaining and also somewhat creepy. Most of the songs T-Pain performed were shorter versions of the originals, which allowed him to pack countless hit tunes into his allotted set time. At a couple different points throughout the performance T-Pain did his best to prove that he can do more than sing through Auto-Tune by playing other instruments such as an acoustic guitar, keyboard and an electric drum kit. Unfortunately, his drum solo was nothing to brag about. It was too long, off beat and awkward. T-Pain did prove to be an extraordinary hype-man, though, doing everything in his power to make sure the crowd was warmed up for Lil Wayne, aka Lil Weezy, aka Weezy F. Baby, aka Mr. Carter, AKA”¦you get the point. Probably the coolest part about T-Pain’s set was at the very end when he confessed to the crowd, “I do not give a fuck how you get my music! Just get it!” After a few bows, he left the stage and made way for the night’s headliner. 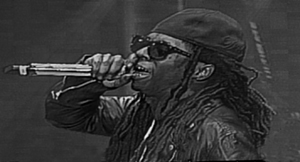 By the time Lil Wayne’s set time rolled around it was so smoky inside the arena that one could hardly see across to the other side. A quick glance toward the stage made it obvious that the layout and lighting set-ups were on a much larger scale. An acoustic drum set, bass, guitars and keys were heard being sound-checked behind a giant white curtain, confirming that Lil Wayne would have a full band behind him and not just backing tracks. Before he came out, his band (which included a very talented female bass player) played a rather heavy rock intro.

When Lil Wayne finally made his entrance, it was in style. He was rocking a black leather jacket, signature sunglasses and as soon as he appeared he jumped up like a kangaroo and upon his landing a huge explosion went off and flames shot into the air from multiple spots on stage. It was quite an epic introduction and the performance didn’t slow down much after that. “Mr. Carter” was the set opener and proved to be a crowd favorite, along with other songs like, “A Milli,” “Mrs. Officer” and “Lollipop.” A couple different points throughout the set Lil Wayne announced, “I ain’t shit without you,” as he pointed out into the crowd. Crowd interaction was a key part of the performance. Like T-Pain, Weezy grabbed a guitar a couple times and basically pretended to play, but he wasn’t really fooling anybody. 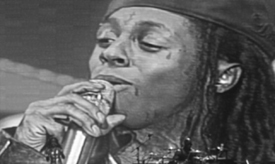 After bringing about two-dozen different performers out on stage at different points throughout the set including T-Pain, Keri Hilson and the entire Young Money family, Lil Wayne was ready to wrap up the show. During the encore song he shot huge fireballs out of a flame-thrower that looked like something straight out of a video game. It was indeed a hot ending to a smoldering performance. Some of the last words Lil Wayne’s spoke before he left the stage were, “You all just made history because you witnessed the best rapper in the world.” Hey, at least he’s confident!