When you break onto the scene as seemingly out-of-nowhere as New York-based indie rock duo Cults did (on the strength of their lauded, self-titled album, released in 2011), you’re bound to garner some attention—wanted and unwanted.

Native San Diegans Madeline Follin and Brian Oblivion formed Cults while attending school in New York. Both were film students when they decided to get together and start making music. On the afternoon of our interview, the duo was taking care of the publicity side of the music business, taking time away from a photo shoot to speak with Submerge.

“I personally don’t very much enjoy it, but it’s the weird side of what it is that we do,” Oblivion intimated over the phone from New York.

“It’s just the weird reality of being a musician,” he elaborated. “If you’re a film director, and you work on something for a bunch of years and you present it to people, that’s your art. You stand on the red carpet for 15 seconds, and that’s all that’s required of you. Being an artist as a musician, part of the art is yourself and your personality and your presentation. It’s a whole new set of challenges to deal with. Sometimes it’s hard to shift gears between spending six months in the dark hole of the studio and then going out and being a rocker. When you’re doing the studio thing, you’re looking forward to putting on your rock face, and when you’re doing the rocker thing, you just want to go back into the studio.”

Though Cults’ rise to notoriety may seem meteoric to outside observers, for Oblivion, it happened in a timely manner.

“It seems that way to everybody else—the “it just happened” thing—and I guess it happened faster for us than it does for other bands, but it felt gradual to us,” he said of the band’s rush to indie stardom. “We played a small show, then a little bigger show, then a little bigger tour. It built up over a year before our record came out. For us, it felt like just the right speed. Anything slower would have been tedious.”

On Oct. 15, 2013, the band will release Static, its sophomore effort and second for Columbia Records. Though the album has much of the dream-y elements that propelled songs such as “Go Outside” from Cults onto many a music aficionado’s play lists, shrewd listeners will find a toothier sound. It has a grittier, more aggressive attack as evidenced by songs such as “I Can Hardly Make You Mine,” with its buzzing guitars, sultry bass groove and thumping drum beat. Oblivion said he was mostly concerned with making an album he’d like to listen to when he and Follin entered the studio, but he also felt as if he had something to prove.

“I feel like an asshole for saying this, but I don’t think there are too many rock bands any more that are interesting or trying to do new things,” he said. “But also, just to prove to myself and to the world that we’re a real band. So much of what happened in the beginning and so much of that moment in music was a lot of people celebrating amateurism, which I am a fan of. But I think we came up in that scene where the bedroom [recording] idea was very rampant. That’s kind of diminished, and I’m glad about it. I didn’t want to make another bedroom album. I wanted to make a real studio record. I think we definitely did that.”

In the following interview, Oblivion elaborated on what it meant to him to make a “real studio record,” and explained why he just can’t let go of his love for ‘90s hip-hop.

That video you put out with the Jonestown clips, for “Go Outside,” I can see why it garnered so much attention, because it’s such a striking clip as well as being a good song. Is that something you feel like you have to craft, alongside your music—how you’re going to present it to people?
Yeah, that’s the really fun thing about being a musician. These days, it’s in style and it’s also just practical to do things on your own. We get to make music, and we get to perform it, but we also design our own stage sets and design our own album art. We work with directors to create our own videos. We get to be creative in a lot of different ways. That’s why we’re so excited about doing this, because we get to have a multifaceted outreach of fighting our own boredom.

How was it being in New York when you first started the band, meeting up for the first time? Were you excited about the move, and was New York inspiring for you to form Cults?
That was how we grew up. Madeline was back and forth between New York her whole life, because her mom lived here. We were art kids who couldn’t wait to get out of San Diego and get to “the big city.” The expectations of what’s going to happen in New York for a lot of people when they come here are very underwhelming, because you have to do so much work out here to get respect from anybody or access to anything, but also just to live. It was a really difficult situation and it can be jarring, especially coming from such a coddling womb as San Diego. Some people hang in there and some people don’t. Some people don’t like it, but I think it’s for us.

I don’t want to sound cheesy but it was almost like you were destined to meet at some point.
Something like that [laughs]. It’s almost like a normal path for kids from San Diego who want to do art. You move to the closest big city, but everyone I know from San Diego lives in New York now.

San Diego is a big city, but it doesn’t sound like it held too much inspiration for you.
That’s what I always tell people, man. It’s the seventh largest city in the country. San Diego deserves respect, but it’s a really, really nice place, which is hard because life is so comfortable there and awesome that you can think, why do anything else?

Were you both involved with bands when you were in San Diego?
Honestly, no. None of us took music seriously until it fell into our laps. I’ve always casually played instruments, and Madeline actually had a brief singing career when she was 8 years old, singing for her stepdad’s punk bands. She was offered a weird punk record deal but didn’t take it. I think she’s always harbored some secret ambition to sing. I would make music on the side, but I never thought it was good enough to compete with my friends who did it more than I did. It took a bit of bravery for us to make some songs, because most of our friends have been doing that for a lot longer than us, but it ended up working out.

When you set out to make Static, what did it mean to you to make a real studio record?
For me it was about live performance, because on the last record, everything was done on my laptop and then brought into the studio and that was it. Most of those drums were fake drums, and the bass was fake. It was all played on keyboards, but this time around everything was live and real, and it presented a crazy set of challenges that I wasn’t immediately able to deal with—having other people play stuff and having a real drummer and recording those instruments and making them work together with a looser feel. I had to figure out my own way to do it. It was super exciting, and I feel like I learned. It was like I went to school or something, just getting up every day and working on it was a tremendous challenge, but it was the best thing I could’ve been doing.

With the last album, like you said, you were on your laptop so you could’ve tinkered with it forever and you’re not really wasting people’s time or money, but was working with live musicians a lot more of a time-consuming process?
It was definitely more time-consuming. It took a lot longer, because we were reaching for a broader palette of sounds and trying out more stuff. I played pretty much everything except of the drums. We actually recorded the drums three times, because I was never happy with how they sounded. It was long days of sitting around trying to find organ sounds and stuff like that.

Were there any albums you were looking to emulate when you were making Static?
In the beginning it was Screamadelica [Primal Scream’s third studio album], which is kind of weird because it didn’t turn out that way. In the beginning, it was like, we’re going to make this big gospel/rock record with electronic production. The first time I heard Screamadelica, I thought the songs were incredibly cheesy and dated, but after the fifth time I listened to it, I was like, “Who cares? This is incredible!” I really fell in love with that, and we had a few songs that didn’t make the album that were more like that, but in the end, the biggest, most important thing on this record was rhythm, because I feel like so much of music today—from a tiny blog to Top 40 radio to rock radio, even—is four-on-the-floor dance beats. We’re like in the new disco, where we’re all going to look back and be like, “Oh my God, remember when we did that? That was horrible.” I really wanted to make a record with cool and interesting rhythms. I’m not a drummer, so that was challenging.

I read an older interview with you guys where you mentioned that hip-hop production was something you were really into. Is that something you moved away from with Static?
I still feel that way. That’s why it was so hard for me with the drums, because I really like how loops sound. It was really difficult to get somebody to play [that way]. It’s the same problem that Daft Punk had, getting people to play music with that kind of feeling but with a touch of humanity—just not too much [laughs]. I’m still in love with all that stuff, ‘90s hip-hop. I always think about that. Even when writing a bass line, I was always trying to write bass lines that could be a weird sample, like this could be a dusty drum break from a record, and I can’t really let that stuff go yet.

Check out Cults in Sacramento as part of this year’s Launch Festival. Cults will play on the main stage at Cesar Chavez Park on Sunday, Sept. 8. Check out Launchsacramento.com for a full lineup of bands and events and to purchase tickets. You’re going to want to do both, because this year’s music lineup is STACKED. Blonde Redhead, Imagine Dragons, Girl Talk, Minus the Bear, Rocket from the Crypt (holy shit!!!), plus a slew of local talent…if you’re not there, you should take a serious look at your life choices. 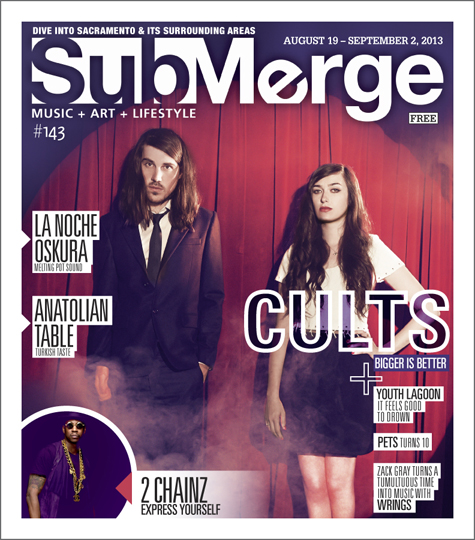