Not the Same Old Thing

Given five words to describe Dad’s LPs, lead vocalist John Morales doesn’t hesitate before responding: “Not the same old thing.” Morales is wise to steer away from concrete musical genres, because Dad’s LPs defies simple descriptors like “alternative rock” or “pop rock.” Their sound spans from airy and upbeat pop to multi-vocalist harmonies to angst-y, grunge-like ballads, with a little something for everyone.

The band started in 2011 as a side project between John Morales (lead vocals and drums) and Jay Seals (guitar and harmony vocals). The duo quickly realized that this partnership was evolving into something bigger and more meaningful than a side project. They teamed up with Chris Twomey (lead vocals, guitar, bass) and Andrew Harris (lead guitar) and settled on the name Dad’s LPs, dreamed up by Morales.

“I had the name Dad’s LPs floating around in the back of my head because that’s where I discovered music—in my parents’ album collection,” Morales explains. The band discovered a common thread in their histories with their dads. Morales’ father had passed away when he was 21, Chris’s dad had passed away several years ago, and Seals’ dad was going through cancer at the time they started writing music together. “We all connected around the idea of giving a nod to the influence that our dads had on our musical growth.”

Dad’s LPs released their self-titled debut album in October 2011 and played their first-ever live show at Placerville’s Hangtown Halloween ball. It was a memorable event, despite the challenging acoustics. “We were in this hangar and it was a giant echo chamber,” Morales remembers.

Since their debut, Dad’s LPs has played shows throughout Northern California, gaining a steady following as their sound evolved and matured. Coordinating times to play together has always been a challenge, as the band members are spread throughout the state—from South Lake Tahoe to Long Beach. “It takes some real logistics planning, which is why we don’t get to play very often. When we do, we want to make the most of it,” Morales says. “We work on the songs independently and bring it all together the weekend before the gig.”

Another challenge has always been that the band packs each song full of so many vocal and instrumental layers that it’s virtually impossible to replicate the sound during live performances with just four band members. The songs are more complicated than just the standard guitar, bass and drums, Morales explains. Most songs also include keyboard, additional guitar parts, random percussion and layers of harmonies. Since the beginning, they have constantly explored new ways to recreate their album sound during live performances without having to hold back on the actual album.

“We’ve never wanted to limit ourselves on the album because of what we’d be able to do live,” Morales says. “We always just wanted to make whatever music was in our heads on the album and then we’ll play them as best we can.”

Dad’s LPs took a three-year hiatus between releasing their debut album and their new follow-up album, and listeners will notice the musical growth between the two albums. “We’ve definitely matured,” Morales says. “The sound, while still varied and diverse, has gotten more cohesive. We’re starting to really find our own voice.” The album is called Lemon on Fire and will be released on CD in mid-September. The band has been releasing tracks off the album slowly over the past few months, and the 10-track album version is currently available for digital download. The official CD release will include an additional two bonus tracks that the band just finished producing.

Lemon on Fire flits between slow and soulful ballads and brighter pop-rock anthems. Songs strike a pleasing balance between vocals and instrumentals. The band has a knack for timing, with most songs wrapping up neatly at around four minutes. Lyrically, each track is a self-contained story, often told with humor, and successfully integrates a rhyme scheme that is subtle enough to not sound forced or childish. These are feel-good tunes—even those that speak to heartache. Morales explains that while there is no common thread throughout the album, the songs have common storylines: “love and heartache and money problems…all these universal themes that we touch on.”

The album opens on the track “Run Around,” an airy and upbeat sing-along tune. The playful and clever lyrics tell the story of “just an ordinary guy”:

Power lunch, back to work, before I hit the gym
I do Pilates for an hour but I don’t get slim
Shower off, powder up, have a real quick shave
Throw on my favorite pair of Levi’s and I’m on my way

The dual vocals in this song have a patchwork effect, and the layered harmonies create a blended sound that would be great to crank up while cruising the freeway.

The tone alters dramatically on the second track, “Ain’t Over Yet,” which boasts a faster pace and a more powerful and in-your-face rock sound. This short track has an addictive build-up:

I can feel the embers burning in the earth below my feet
I’m a sinner in your gallows; this floor is bound to drop
And common sense would tell me to stop

This build-up crashes to a satisfying chorus: “But don’t you tell me to stop!”

“Torn Apart,” the third track, is a melodic break-up ballad that speaks on a universal level to anybody who has experienced heartache, without coming across as whiny or juvenile. The slower pace and poignant vocals are characteristic of several of the tracks on this album, including “A Whisper in the Background,” which showcases the band’s powerful vocals and harmonizing.

“Turn on a Dime” explores a particular indie folk/Americana sound that sets the perfect backdrop for the song’s message of hope and promise.

Other noteworthy sounds you’ll find in this album include the powerful ‘90s grunge sound of the track “Blown Away” and the ska sound of “SOHO.” The album closes on “Cut and Run,” which has a slower pace and a country-like twang that builds up to a triumphant finish.

On the whole, this is an album that embraces inconsistency and isn’t afraid to pay homage to the artists along the years that have made an impact on the band’s musical roots, making it worth a listen.

Dad’s LPs will play at The Torch Club for the first time on Thursday, Sept. 11, 2014. Cover charge is $6 and the show begins at 9:00 p.m. The Lemon on Fire CD will also be released in September, and will include the 10 tracks currently available for digital download as well as two bonus tracks. Check out Facebook.com/DadsLPs for details. 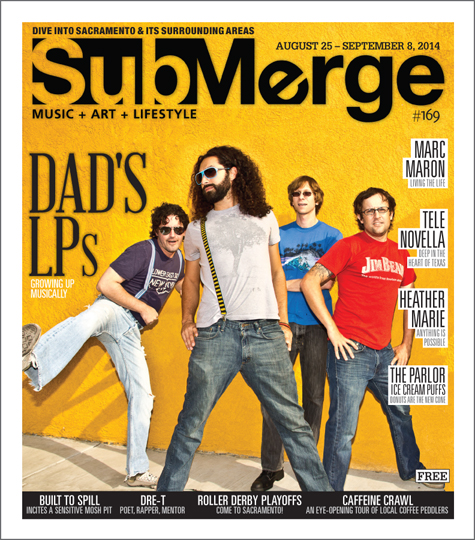