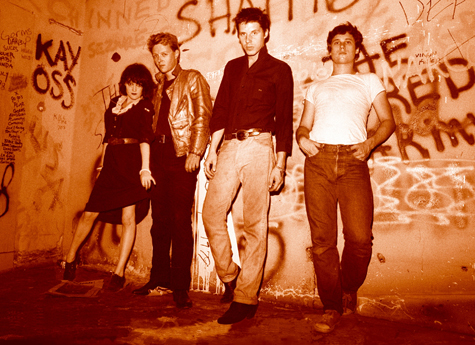 Exene Cervenka and X still as vital as ever

“My stove was broken, and someone came to fix it,” confides Exene Cervenka after an interruption in the middle of our interview. “They said it was never broken in the first place. They made it work, and I feel like an idiot now. Life is funny.”

It sure can be, and life has certainly been a strange trip for Cervenka. In 1976, she moved from Florida to Los Angeles, and barely a year later, she was well on her way to becoming a punk icon. Along with Billy Zoom, DJ Bonebrake and her one-time husband John Doe, she helped shape a musical movement that was often imitated but never quite duplicated.

Cervenka’s life hit a considerable bump in the road this June when she announced that she had been diagnosed with multiple sclerosis, an incurable disease that affects the brain and nervous system. She wrote on her Web site, “After some months of not feeling 100 percent healthy, I recently had some medical tests run and the prognosis is that I am suffering from multiple sclerosis. Apparently, it has been affecting me for quite some time.” Coincidentally, back in the 1990s, she and X had worked with Sweet Relief, a charity that “provides financial assistance to all types of career musicians who are struggling to make ends meet while facing illness, disability or age-related problems,” according to the organization’s official Web site. The charity was started to help musician Victoria Williams pay her medical bills when she was diagnosed with MS in 1992.

“The irony of this is not lost on any of us,” Cervenka went on to write in her June 2 statement.

Now months after the diagnosis, Cervenka reports, “I seem to be doing fine with it. I’m still working, and I’m still touring.” True to her word, she released a solo album, Somewhere Gone, in late October and has already played some dates in California in support of it. The album, a haunting collection of sparsely arranged folk tunes, is available through Bloodshot Records. Cervenka says she has more dates through the South and Southwest planned and is looking at heading further east in the spring.

“It does cut into my ability a little bit to tour and play shows,” she says of her condition. “Just because it’s a little bit harder physically than it used to be, but that could be my age as well. I still love touring very much, and I try to do it as much as possible.”

In addition to her solo work, she’s been busy with X. This Thanksgiving, the group headed back into the studio for the first time in quite a while to record a “digital 45″ of two Christmas songs (“Santa Claus Is Coming to Town” and “Jingle Bells”). The recording has spawned a handful of holiday shows, including one at Harlow’s on Dec. 29, because, as Cervenka puts it, “Sacramento deserves a good party.”

“We’re playing two nights in San Francisco, and one night in Sacramento, so it’s going to be three nights in a row of New Year’s Eve celebrating,” she says.

Sacramento punk fans—and music fans in general—would be remiss for not circling the date. It’s a sad fact that many of the bands from punk rock’s heyday are gone. However, you’d be a fool to say, “Punk is dead”—at least not as long as X is around. Cervenka acknowledges that the band has become a flag-bearer for the movement it helped shape. Perhaps it’s a lonely place, but as Cervenka puts it, “I’d rather be alive than dead.”

I wanted to first talk about your solo album, Somewhere Gone, that came out at the end of October. It had a really spare sound. Did you have those kinds of arrangements in mind when you wrote the songs?
Yes I did. I was writing a record that was lyrics-driven, and not about a band. The Original Sinners was a band that I tried out for a few years, but that was an artistic failure as far as I’m concerned. I shouldn’t have gone that route. I have X and the Knitters if I want to do rock ‘n’ roll and country and punk rock. So what I need, instead of a band like The Original Sinners, is my own solo career, and that was great, because I got to work with some pretty great people.

Why do you call The Original Sinners a failure?
Because the lineups kept changing”¦ It was just really hard to keep it together, because the people I was working with had other projects, and it wasn’t a priority. I wasn’t happy with the way the production worked. But I’m really happy with Somewhere Gone. It’s exactly what I wanted to make—the record I wanted to make.

Were these songs you’d been kicking around for a while?
No, they were fairly recent songs, and I’ve written a lot of songs since then. I moved back to California from Missouri, and I’m working with different people now and writing songs here and getting ready to make another record.

What were you doing out in Missouri?
I was living there for a while, but I decided to move back to California, because the people I wanted to work with are here. My business is all here, and my friends are all here. I got pretty burned out with living out there [in Missouri]. It was pretty isolating and not very much fun.

What caused you to move out there?
I was searching for a small town somewhere. I thought it would make me happy. But it didn’t make me happy, so I came back.

I’m glad to hear that you’re still pressing on despite being diagnosed with MS. In the statement you released on your Web site about the diagnosis, you mentioned that you and X had worked with Sweet Relief, which helped Victoria Williams, who also was diagnosed with MS. Did that give you some insight to the disease?
Well, yeah, it did. I’ve known Victoria Williams a long time, and I remember when she was diagnosed. I’ve talked to her several times, and I’ve talked to Sweet Relief several times. I’m lucky, because right now I don’t need any assistance financially, but if I ever do, I will definitely go to them. They’re a good foundation.

Are you planning to do any charitable or awareness work for multiple sclerosis research in the future?
You know, if it comes up I will, but what I like to do more than that is play a lot of benefits for friends or people who have medical bills and stuff like that, rather than organizations. We do give money to Sweet Relief—X does—every time we play, but I like to see the money to be handed over to somebody and have them put it in their checking account and pay their bills. So those are the more personal benefits that I like to play, but Sweet Relief is an organization that we’ve been helping for a long time, and I don’t expect that to change.

In that light, have you been following the debate in this country over health care reform?
No. I’m waiting until it ends. I don’t need to know all the stories and the pitfalls and the fights and the arguments and the pettiness of the people in our government right now. If it comes true that there’s health care, that’s great, but if it doesn’t come true, that’s what I expect, and that’s fine too. Nothing’s going to be any different in this country, probably. But I don’t follow the news, I don’t read magazines, I don’t watch television—I don’t even have a television—all I want to know is the end result. I don’t want to know all the bullshit.

There’s definitely a lot of it floating around right now.
Yeah. I’m sure there is. I don’t want to know.

Was that something you were all stoked on doing, or did it come with some trepidation?
It was something Billy always wanted to do. He wants to make a Christmas album, and so, right now, the best we could do is put two songs together, because right now a Christmas album is too much. But, yeah, we recorded two songs, and Billy produced them, and I think they sound great. People can get them if they want on the Internet, and we’re going to be playing them live.

How did that feel to get back in the studio with X?
It felt great. It went really well, and it made me want to do more. We’re talking about—as usual—writing some songs and putting them out, but we’ll see if we get closer to that.

Is that something you guys talk about often?
We talk about it all the time. We never do anything about it.

Why not?
We’re like a pretend band on some level. You know how some people have a name for a band and an idea for a band and some songs for a band, but they don’t have a band. Sometimes I feel like that—like I’m 19 and I’m just trying to start a band, because it’s like, “Why don’t we get into the studio and record some tunes?” But we will eventually. Maybe in five years or something. We’ll see.

I saw a quote from you in one of the bios that was sent to me. I think it was from 2008. You said, “I remember one night at the Masque, saying to myself at age 22, I just paused in the middle of my drinking and thought, ‘This is an amazing thing. You’re really lucky to be here right now.’ I realized in that moment how special it was.” Has that feeling remained the same over the years?
There’s two ways of looking at it. One is the feeling you have in the moment, which can’t be kept. It passes, right? You have a realization or an amazing moment, whether it’s an event that you’re at or a band that you’re watching, or your life and then you just realize that it is going to pass some day, so you just sit there for a second and think about how great it is. And then, you try to continue on in life to have those moments. Maybe the punk scene will never be transcended by something in my life as far as a new musical movement or something like that, but certainly new songs, new experiences, new people, new art can be achieved all the time. So those moments, yeah, I have those moments. 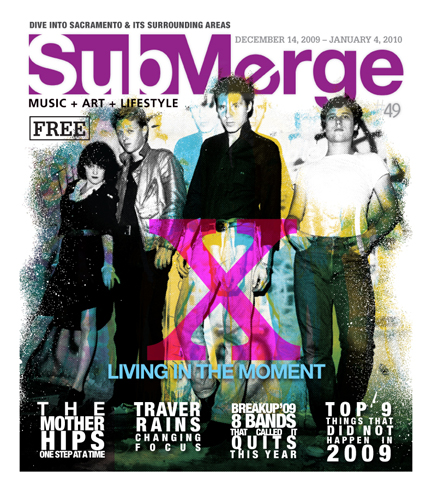 Hope you did not miss X at Harlow’s on Dec. 29. For more information on Sweet Relief, go to www.sweetrelief.org.