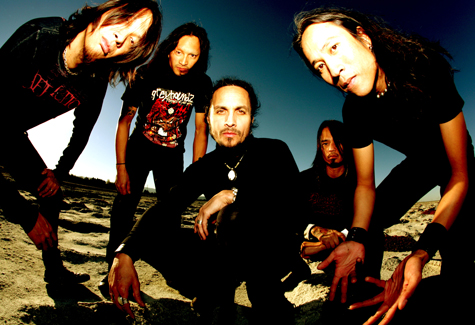 Tragedy has shortened the careers of many rock ‘n’ roll musicians. In 1990, it would seem like Bay Area thrash band Death Angel would have to be added to that list. The young group, signed to a label before its members had even turned 20 years old, saw their burgeoning careers hit what seemed to be a dead end when their tour bus crashed in the Arizona desert. The accident left drummer Andy Galeon critically injured, and the members of Death Angel moved on in a different incarnation as The Organization.

But that wasn’t the end of the story. Tragic circumstances caused Death Angel to reunite over a decade later when the band’s good friend, Testament’s Chuck Billy, was diagnosed with a rare form of cancer in 2001. However, as lead guitarist Rob Cavestany explains, the reunion was entered into with a bit of trepidation.

“It was a big enough decision for us to reunite even for that, because we were so adamant against coming back and being one of those bands that comes back together for the wrong reasons and ruins the cool history that we left behind,” he says.

After a successful performance at the benefit for Chuck Billy, Death Angel seemed to pick up the same unstoppable momentum the group had heading into that fateful day in 1990.

“Our intent was just to do a few shows, and then it led to a few tours, and then that was going to be it, call it quits before we pushed it too far,” Cavestany says. “But we just kept going to the next level. Finally, as we were just jamming and jamming together, we started coming up with new riffs and parts, just by messing around, and all of the sudden, no one was saying anything, but we were realizing that we were starting to make new music, and we were like, ‘Uh-oh. This is happening.'”

Death Angel released its second album since reuniting, Killing Season, last year. In the following interview, Cavestany reveals how his band got to the point it’s at now.

You were young in the ’80s when you started Death Angel. In a way, you became adults in the Bay Area thrash scene. What was that like?
It was definitely different than the normal upbringing, I would imagine, but it was great. The scene was totally blossoming at the time, and we were right in the middle of it, just loving it, total excitement, just going to every show. It was totally running through your veins at that point in time.

I remember when I was a kid in New York in fourth or fifth grade; I was listening to your band and Exodus. Obviously, that was before the Internet took hold. Were you surprised how far the thrash scene reached?
Absolutely, because it was such an underground thing at first. Quite frankly, we were very proud of it being underground, because we were hardcore into the scene of it, and the underground vibe. It would seem like selling out for the thing to become so huge, but inevitably, it was such good music”¦it struck a nerve all across the world. In the end, now, I’m not really surprised about it.

When did you first realize that it wasn’t an underground thing any more?
I think when Metallica started to break ground, and then there was the Clash of the Titans tour, with Megadeth, Anthrax, Slayer and Alice in Chains. That was huge for thrash. And at that point, it was evident that it was happening. Unfortunately, right at that time, we got in that bus accident that ended our band. We were supposed to be on the Clash of the Titans tour, but we got in the accident and they replaced us with Alice in Chains.

I read a quote of yours following the accident where you said, “In a way, it made perfect sense to have a major accident right now, it really fit the story line. We’ve been pushing so hard for eight years and just not getting that far, and getting so frustrated with not being where we should be after so long, it was time for something climactic to happen!” Do you think the Death Angel would have survived even if the accident hadn’t happened?
That’s a tough one, because you’re trying to speculate. You’d never really know, but you do your best to recreate the scenario and see. When I said that, I was trying to look for one weird, positive thing out of something that was really horrible for us. For us, at the time, true enough, we’d been going nonstop for eight years. I was only 21 at that point in time. From 13 to 21, going at something like that for eight years, seems like a very long time to you at that age. We were getting really burnt out by a lot of the crap that we were dealing with within the industry, and the people who had taken advantage of us in different situations, we were starting to see the light and become aware of the stuff that was going on around us. And when we were, we weren’t like the stuff that was going on. Also, just getting tired of the whole drill and the whole scene, in a way. We were looking to branch out and explore other things, other music, other people, other things in life. Things you miss out on—your friends, and a normal life for a kid.

As far as our band was going at that point, though, we were really climbing. We were headed for really big things. Right before the accident happened, we were supporting Act III on tour. All the shows were sold out. When we got into the accident, we were on our way back home where we had”¦a Friday night show in Oakland and a Saturday night show in San Francisco booked, and both shows were sold out in advance, so things were really happening for us. And then we were supposed to go on the Clash of the Titans tour with Metallica, Slayer and Anthrax. And after that, we were supposed to go out to Europe to support Judas Priest on their tour. Things were definitely going up for us, and things would have gotten a lot bigger, I would imagine, if we were able to do those tours and keep on going. As far as how long we would have stayed together, who knows. I like to look at it like we wouldn’t have stayed together. The pressure would have gotten to us. We would’ve ended up just imploding upon ourselves despite the success”¦because the way it was affecting us individually as human beings.

With that in mind, once again trying to put a positive spin on a negative situation, I tend to feel that it would’ve been the end of the band in other worse ways, and maybe we would have come to the point where we wouldn’t be able to be friends with each other any more if that had happened. Looking at that now, we are existing today, and I think we wouldn’t have had we kept on going back then. We would have come to a permanent end”¦ We were forced into a break from each other and a break from the whole scene. It gave us a fresh start.

Last year you released your latest album, Killing Season, and obviously you’re older now and in a lot different place, but the music is still thrash metal. What kind of place do you find yourself writing from now, especially since you’re a father?
It contributes in a way in that it adds hardcore fuel to the fire to work very hard, because now you’re working for more reasons than just to rock out and make a name for yourself. You’re working for the survival of somebody else to exist in this world. Music is our lives and our jobs and our careers. You spend all this time and effort doing it, so you just have that much more motivation to drive you to do the thing that you do, but as far as the concept and the lyric and the vibe for Death Angel’s music, it separates itself from that kind of family wholesomeness you experience at home, because it doesn’t crossover into the aggressive type of vibe you need to play this kind of metal. It works its way in as far as inspiration and motivation, but it doesn’t work its way literally into our lyrics or the feeling of the music we play. For me personally, I go into a different head space where I’m not even me, the family guy, I’m me, the dark child cruising through the rock world [laughs].