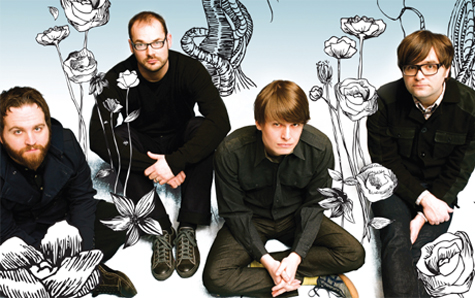 Even as Death Cab for Cutie readies their second major label studio album, the group’s name is still synonymous with indie rock. The Seattle-based foursome has accomplished a remarkable feat by gaining wide acceptance without alienating those who have been there from the beginning.

Narrow Stairs (to be released May 13) marks the band’s first release since their 2005 Atlantic Records debut Plans. Though they took some time off, Death Cab is back in a serious way and ready to embark on a string of tour dates that will carry them from now through mid-August, without much time off in between. The band will stop at this year’s Coachella, head to Europe and Japan, but first, Death Cab will play a series of sold out West Coast dates, including a stop at the Freeborn Hall on the campus of UC Davis. Drummer Jason McGerr spoke with Submerge while preparing for his long trip around the world and filled us in on some particulars of recording Narrow Stairs.

Hey, Jason. How’s it going?
Good. Do you have your tracking device going?

Yes. Your coordinates are being triangulated, and we’ll find you.
Let me know when I have 15 seconds before the lock, and I’ll hang right up.

Where are you right now? Are you home?
Actually, I apologize if it’s a little noisy right now. I am at home, but I’m just on the road, running errands. Time speeds up when you get closer to tour. You realize that you’ve got a gigantic list and you realize you’ve only got a few days before you disappear for a long time.
This is the first time you’ll be playing a show in 18 months. That’s quite a while.

Yeah, it’s pretty wild, huh?
What have you been doing in that time?
We started working on Narrow Stairs at the very end of August, but we really started recording in the middle of September. In those first eight or nine months off, I did a little bit of recording with Tegan and Sara for The Con, and a few other little projects. I also built a recording studio. That’s what I did with my time off. I’ve just been enjoying being able to do different things, but we’re about to go back on full court press. I’ll probably be gone from the middle of April to the middle of August for sure.
So you guys aren’t testing the waters, you’re just diving right back in.
That’s the way we do it.

I’d read about the recording studio. Was that something you’ve always been wanting to do?
No. I’ve had bits and pieces of recording equipment. I’ve had gear for a while and been able to have a home setup. But my home set up started to seem smaller and smaller. I’ve had more drums than recording equipment for a while, but drums, as you know, take up a lot of real estate. My house was just busting at the seams, and I just wanted a bigger place to practice. I figured we might as well be able to record there too. I found a building, and I was going to be selfish about it and just make it my glorified office space, but it just seemed ridiculous for me to have all this equipment and just shut it down for eight months out of the year when we’re on tour, so I found some great employees—some people who are also drummers—real educated engineers. Long story short, I hired some people and wound up with a commercial recording studio.
I didn’t build it with the intent of it being where we would record the next Death Cab record. When the band got together in August 2007, I wanted to rehearse there and do a little recording to see if it was going to be conducive, to see if it felt comfortable or felt right, and everyone seemed pretty psyched. Like I said, it wasn’t my main goal to build this big recording studio. I just wanted a place to practice, but it wound up being a really fun project, and I built most of it myself, with the exception of a few things that I hired people to do. It was a really fun project—hands on—to dive into.

You didn’t record the whole album there did you?
No, we did maybe five, four and a half. We did “I’ll Possess Your Heart,” “Talking Bird,” “Grapevine Fires,” half of “No Sunlight.” There are some other things there that didn’t get used on the record, but we divided the time between my space—Two Sticks Audio—Tiny Telephone in San Francisco, Robert Lang’s in Seattle and Chris [Walla, guitars/producer] did a lot of overdubs and finished mixing the album at his studio in Portland called the Alberta Court.

How are the new songs coming along in rehearsal?
Awesome. Great. It’s nice to be able to have a record that you don’t have to learn how to play it. The songs, the majority of them, were recorded live with all four of us playing, so it’s just like we were back in the studio. We’re revisiting past records and going deep into the catalog and seeing what sounds good and feels right. We start out on this first tour down to Coachella, obviously no one’s going to have the new record, so it’s not going to be a set of new material because no one’s going to know anything. We might play three, maybe four songs from Narrow Stairs, and the rest are going to be back catalog songs. Once we hit the road proper in the third week of May, we’re going to be playing a lot of stuff from the new record.

You said you recorded a lot of the songs live, is that something new for the band?
For this album, it’s a little bit different for us. It’s also a little bit different from how records are made these days. You have to—especially if you’re going to use tape, analog tape, when you’re recording, because it’s not like you have something on your computer that you can make real quick edits with. Anything that gets committed to tape is pretty much like permanent marker or paint on the wall; it’s there to stay. You can’t paint over it with another color or start over all together, you have to be decisive and committed and totally OK with the way things sound from start to finish. And that’s not a new thing by any means. They did that for the first 50 years of making music, before there was any digital platform, so I’m not standing on a soapbox saying, “We’re pioneers!” No way is that the case.

It’s a refreshing way to record. It’s like showing up to work with bed head, but you’ve got a good attitude. You’ve got to rock it. We’ve done more individual performances where it’s just one of us or a combination of two of us tracking at once just to get the best performance possible, to capture some great moments, but we clock in so many hours together as a live band on stage, our mileage is far superior in terms of playing as a group compared to doing individual performances. So it just made sense this time around to just play. If we can’t play the song as a group, we have no business recording it. That was sort of the M.O. I really like the way it turned out. There were plenty of moments on the record that were loose, but it’s a really cool loose. It’s like we’re human beings playing music in a room.