All for One • Desario Employs a Collective Mentality in Writing its Latest Album, Mixer 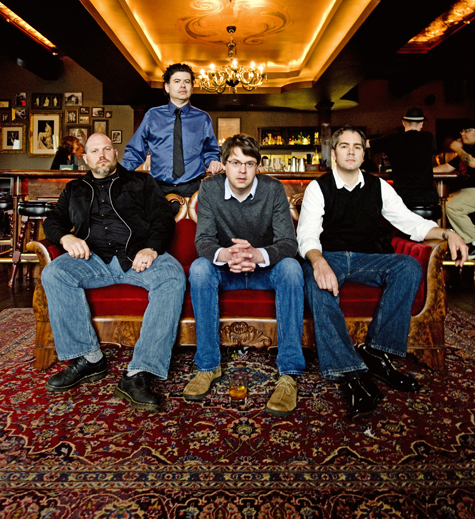 Endings, as the saying goes, often lead to new beginnings. When Sacramento indie rock band Holiday Flyer called it quits in 2002 after almost 10 years as a group and four full-length albums, its members found new avenues to express themselves musically. Three-fifths of Holiday Flyer–which began as the brother/sister duo of John and Katie Conley, but grew into a five-piece band by its final album, 2001’s I Hope–went on to form Desario just two years later. Frontman John Conley, bassist Michael Yoas (making the jump from bass back to his first instrument guitar in Desario) and drummer Jim Rivas were joined by bass player Mike Carr. Desario released its first album, Zero Point Zero, in 2009. On February 28, 2012 the band will put forth its sophomore effort, Mixer, which shows that even after many years as vital parts of the Sacramento scene, the guys of Desario are still looking for new ways to expand their craft.

Yoas produced and engineered the entirety of Mixer, which was mixed by Larry Crane (who has worked with Elliott Smith, among others). Last time around, on Zero Point Zero, Yoas recorded everything except the drums. He says he and Conley had been playing music together as far back as the ‘80s. “We started in punk bands together in high school. We wrote together back then, and then I didn’t play music for quite a while.”

It was eight to 10 years by Yoas’ estimation that he hadn’t played music until his old friend lured him back into the studio. Yoas laid down bass for a few tracks on Holiday Flyer’s third album You Make Us Go and enjoyed an expanded role as a fixture on I Hope.

“Jim [Rivas] and I joined and put our stamp on it with bass lines and drums and percussion and added some arrangements,” Yoas says. “But for the most part, Holiday Flyer was John’s vision.”

Desario is an entirely different animal. Instead of leaning on one songwriter, the band takes a four-heads-are-better-than-one approach. In fact, the title of the album refers to the fact that the songs on Mixer were a group effort.

“It really is a band effort,” Yoas explains. “Other than the lyrics–John writes all the lyrics–it really can start with any one of us.”

This time around, the songs came together in Desario’s practice space, evolving from jams to the fully realized recordings found on Mixer. The album has a layered, sometimes spacey sound that’s imbued with underlying warmth. Songs such as “Victoria Island,” which begins with a sort of watery synth burble, stretches out into a well-paced five-and-a-half minutes of absorbing rock, layered with shimmering, distorted guitars. It’s indicative of what you’ll find on Mixer–songs that are a bit challenging, yet easy to get lost in.

On an early Saturday morning, Yoas took the time to answer some of our questions about how the album came together, and revealed how Desario thrives by keeping their songwriting process fluid.

How was the process of producing Mixer as opposed to Zero Point Zero?
Kind of arduous at times. When it’s your own music, you’re never quite sure if you’re going in the right direction or not. You’re constantly second guessing yourself. But in the end, we’re really happy with it.

How is it working on someone else’s stuff as opposed to working on your own?
Honestly, it’s a lot easier for me. I have no problem giving my opinion on something, or if I’m hearing something to add or take away, it’s pretty easy giving my opinion and feel good about it. I am an avid music fan as well. When you hear something, just throw it out there.

When you’re giving feedback when you were working on Mixer, did you find that you had to be more tactful in giving your opinion since you’re a member of the band?
Absolutely…

Do you find yourself holding back sometimes? You’ve known the guys for a while. It must be an interesting dynamic in the studio.
Oh, you mean giving Desario advice?

Oh no. I’m not tactful at all [laughs]. As far as the guys in my band, I think at times I might have been kind of hard and had a vision and did everything I could to get out of them what I was hearing, knowing that we could all go back in the end as a group and sort things out and edit things. I definitely wanted to try to get a lot of different takes of everything just to have options.

As far as your vision for this record, is that something that came through in the writing of it or afterward when you started recording?
Definitely in the writing. We were going through a phase with this batch of songs. This batch of songs probably came together over the course of three years or so. We were trying to do things–for lack of a better term–more intricate and more elaborate, I guess, and not by choice, but for whatever reason it’s the place we were in for a couple of years. Just looking to make it as interesting with synthesizer and other elements we didn’t use at all on the first record.

You mentioned that the songs came together from jamming as a band. How did you like working that way?
It’s funny, all of us in the beginning were like, “It’s tough for us to jam. It’s hard to come in without any starting point and create music.” As we evolved as a band, we found that we all played so well together, it was really easy to jam–starting with one of Jim’s drumbeats or Mike’s bass lines. It could be anything that would make someone say, “Hey, keep doing that,” and that’s how most of the songs on Mixer started…

There has been many practices where we don’t have any shows to practice for, or we’re not recording anything. We’re very diligent. We have a scheduled practice night every week, and regardless of what’s going on, we make it a point to go in that night and practice, even though we have no reason to be there, just to see what might come out of it.

In that regard, are you guys writing all the time now? Has that process opened you up to be more prolific songwriters?
I think so. We’re constantly writing. With the stuff that we’re writing after Mixer, we’re taking a slightly different approach. John and I are trying to noodle with some ideas together and bringing them to the band to see if they think it’s worth moving forward with those ideas at this point. We’re constantly trying to change how we song-write, just to keep it interesting and so we’re writing different kinds of songs all the time.

So you’re working on stuff with John for a next record?
As a band we’ve already got six songs written. We basically have all the ideas for another album’s worth of material that we just need to hash out as a band and get arranged and just get it completed.

No rest for the weary, then.
Exactly. Yes, we’re always writing, but we definitely go into practice now with an idea of what we want to do instead of going in without any purpose.

You guys have a listening party coming up for Mixer before playing the CD release show on March 3. What do you have planned for the listening party?
We’ve got two hours at Phono Select. We’re going to let the CD play a couple of times in the store. It’s going to be available for sale. We’re going to put out some beverages and snacks. We’re just going to make it a real casual thing–come in, check out the record and enjoy a beer or a glass of wine and just have a good time.

Desario’s CD release show will take place at Beatnik Studios on March 3, 2012. Joining Desario will be Tremor Low from Oakland and Hearts + Horses.