I Like Boys, Ahhhh! The Zany World of Destroy Boys 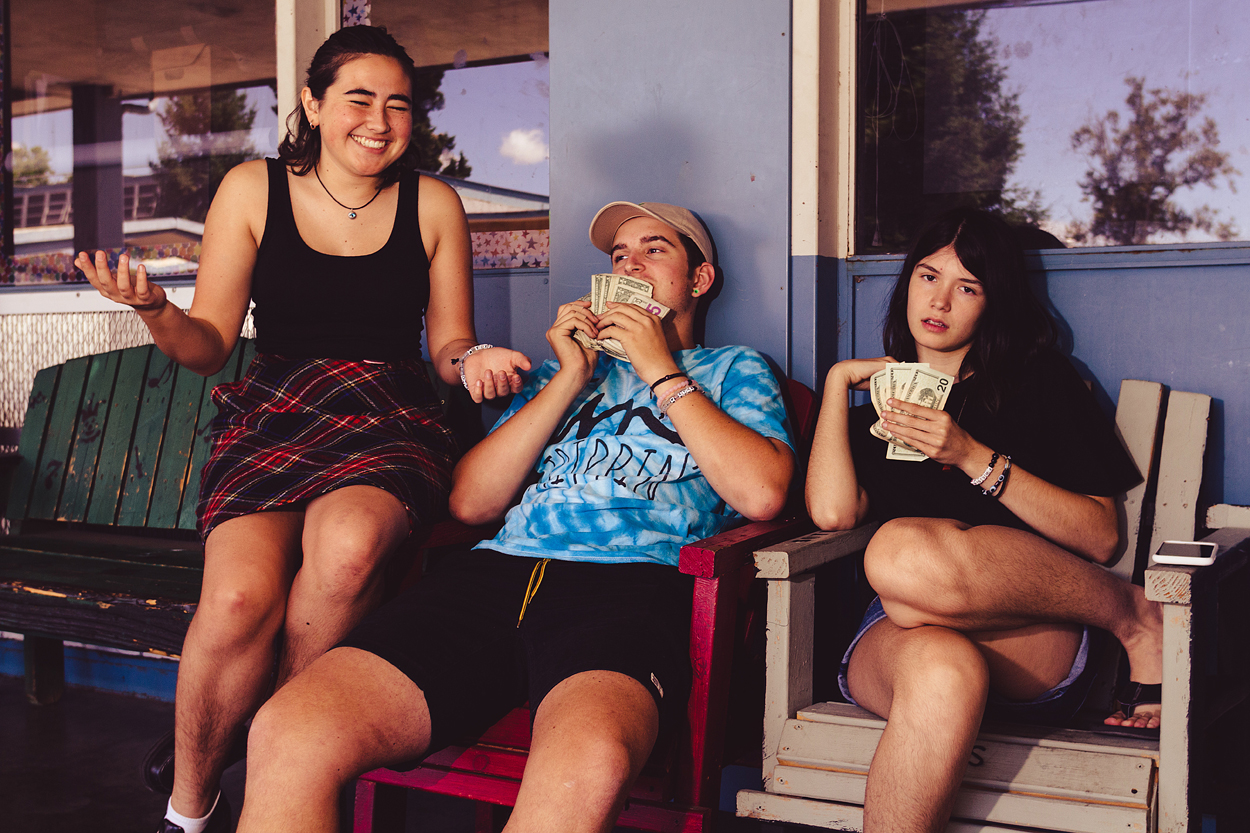 Sob Story
Once upon a time, I almost gave up on journalism, mostly because in every interview, bands started saying the same exact things: “We’re going to change the music scene forever, man!”; “We have a unique sound that nobody has ever heard!”; and “We need to up our social media presence!” They said that kind of stuff over and over again, like some bullshit mantra of the perpetually mediocre. Pretty soon, I started hearing the desperate machinery of marketing and branding entering into every riff and melody of their stupid songs. It was no longer music, just a series of dog whistle pleas for Facebook “likes” and networking opportunities. Talking to musicians was ruining music.

It wasn’t until recently when music became exciting again. Bands like Little Tents, Dog Party, RAD, Death Rogen, etc., seem unmotivated by networking and branding, and instead their music—raw, interesting and, at times, funny—resonates with a certain soulfulness, like it comes from a place of pure fun. The fun of playing with friends. The fun of creating rad songs. And when music is fun, fans flock naturally.

Because everybody likes fun, goddammit.

Which is where Destroy Boys come in. Vi Mayugba (guitar), Alexia Roditis (vocals) and Ethan Knight (drums) materialized one day with their scrambled up, punk-ass garage rock—songs ranging from folky to full of angst and rage. And they have magnificent titles, like, “I Threw Glass at My Friends’ Eyes and Now I’m on Probation,” a fast-paced, monologue-heavy rocker with tons of laughs. There are also slower and moodier songs like “Goldilocks Spot” where Roditis wails like a depressed lounge singer. And, of course, there’s my favorite song, the hardcore “30 Seconds of Shit,” which in half a minute makes me want to burn down a police station. For an EP that only lasts about 10 minutes, it’s full of energy and great fun, a much better advertisement for a band than, say, a Facebook post with hella likes or a viral YouTube video of a cute baby doing stupid shit.

The band really sort of sprouted up out of nowhere. One minute Destroy Boys didn’t exist and the next people were super into them. I mean, they have a good collection of songs, they’re releasing a couple singles on Uncool Records and they’ve even racked up two proper shows at 924 Gilman, but, like, where did they come from? The answer is I have no fucking clue. When I went back to listen to the recording of our interview at Temple Coffee, it sounded like a bunch of people yelling, then laughing and then everybody talking at once. My notes look like the scratchings of a nonsensical madman. Interviewing this band is like being inside Ken Kesey’s One Flew Over the Cuckoo’s Nest, but with hyperactive teenagers instead of mildly dangerous crazy people. To get you in the mood, here’s a typical conversation with Destroy Boys:

“You kind of look like Mick Jagger,” Knight says, laughing and pointing.

“Actually she looks a little bit like Steven Tyler,” I say.

“Steven Tyler! That’s who I was thinking of! I didn’t mean to say Mick Jagger!” Knight yells. “You’re the Gordon Ramsay of Sacramento music!”

And then they start yelling at each other again. 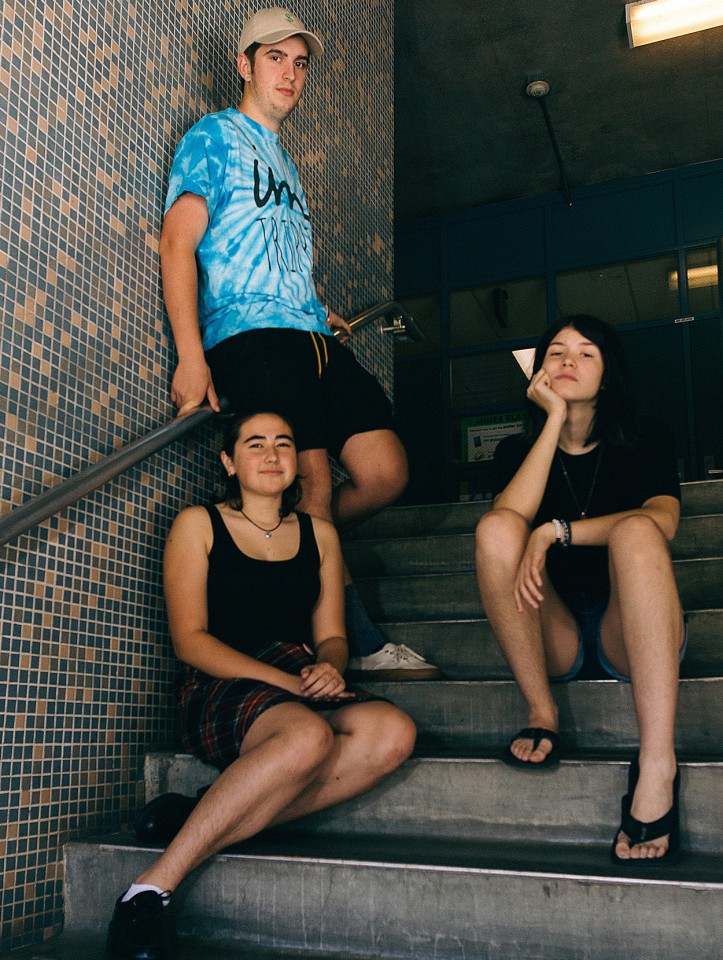 Serious Draw
It’s sort of sweet, the way the band interacts, like a dysfunctional family that can’t tell if it hates or loves each other passionately. Mayugba plays the mother who knows what’s best for the band. Knight is the rebellious son. And Roditis is the responsible older sister, always there to mop up everybody’s shit.

Like a family, despite their dysfunction, they work quite well together. They keep this running list of possible song titles, weird shit like “I Love Dying,” “Jo Jo Binks” and “Texting Won’t Pay the Bills.” Mayugba tells a story about the time she was sitting around with Lucy Giles (from Dog Party) and out of nowhere, Giles gets a really sad look on her face and says, “I like boys, ahhhh!” Mayugba thought that would make a perfect song title, so she wrote “I Like Boys, Ahhhh!” in a section of her phone called “Title Notes.” The whole band compiles title notes and they all draw from the list when they’re out of ideas.

Make no mistakes: The band, however wacky, loud and obnoxious, still wants to be taken seriously. They’re not just a bunch of fuckups.

“I think we all want to be successful,” Mayugba says. “It’s my career of my choice. This project is my baby. I am the manager. I handle all the stuff. But we have a lot of fun with it and I think that’s how we’re going to reach success is being ourselves and having a good time with it.”

“No, it’s true!” Mayugba says. “I don’t know if this sounds arrogant or not, but we’re above the tier of another local band. We gather some serious draw—”

“Yeah, that sounds like you’re full of yourself,” Knight interjects.

Mayugba tweaks her statement: “We’re not signed, we’re not selling out venues, but we’re having a lot of fun.” 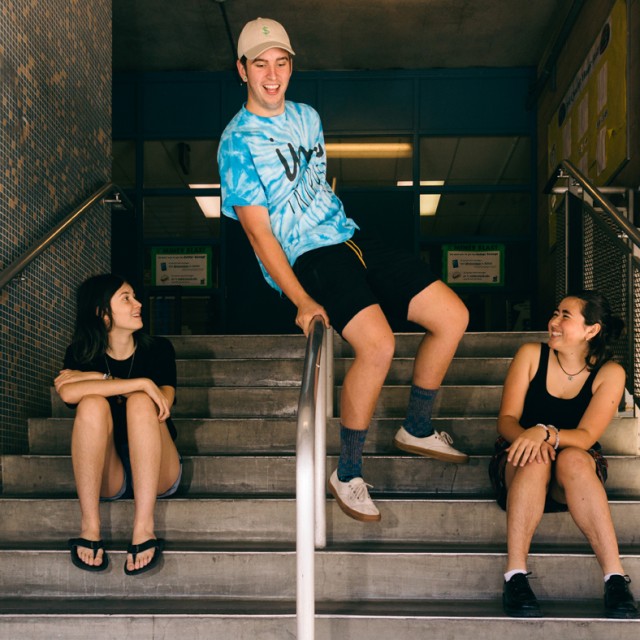 Worn Out Our Welcome
I wonder about the name Destroy Boys, and Roditis tells me that the name has caused a bit of confusion, and even anger, amongst fans. They’ve even been accused of being “feminazis.”

“We get a lot of stuff for our name.” Roditis explains. “I remember at our Naked Lounge show a guy came up to me and he was like, “I really like your set, but, um, where did the name Destroy Boys come from? Do you hate men?” I was like, “Please leave me alone. I’m walking to the bathroom.”

And at this point in the interview, a poor woman sitting next to us on the couch trying to enjoy her coffee and newspaper becomes visibly agitated. She looks at me like, “What the fuck?” and then without a word she gets up and leaves the coffee shop. Without skipping a beat, the conversation somehow turns to white people.

“Ethan, you are the whitest member of this band!” Mayugba says. “You are transparent.”

Catch Destroy Boys June 28, 2016, at Harlow’s, located at 2708 J Street in Sacramento. Together Pangea and Patsy’s Rats are also playing this 7 p.m. all-ages show, with tickets ranging from $12–$14. For tickets and more info check out Harlows.com. Destroy Boys will also play the second annual Sac Ladyfest at Cafe Colonial, located at 3520 Stockton Blvd in Sacramento. The two-day festival goes down July 15-16, 2016, and features 15-plus bands. Learn more at Sacladyfest.com.