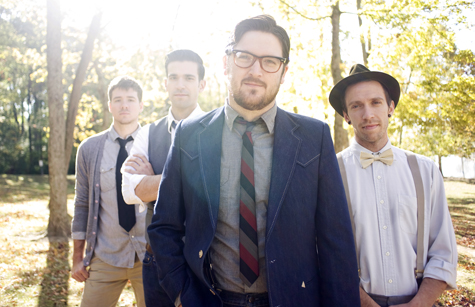 For better or worse, the digital music age has leveled the playing field. Independent, more or less unknown bands and artists have just as much opportunity to be heard as major label acts. One band that has taken advantage of this is Daniel Ellsworth and the Great Lakes from Nashville, Tenn.

In May 2011, the band released its first full-length album, Civilized Man. Fan-funded, Ellsworth and company used money from a Kickstarter campaign they started at the end of 2010 to self-produce and self-release the album and hire notable Nashville sound engineer Mark Nevers, who has worked with Yo La Tengo, Andrew Bird and Bonnie Prince Billy. Despite being 100 percent DIY, according to the band’s singer/songwriter and namesake Daniel Ellsworth, he and his Great Lakes’ labor of love didn’t go unnoticed. Civilized Man cracked Amazon’s Top 100 albums of 2011 (landing at No. 76; including No. 66 on the site’s Outstanding 2011 Albums You Might Have Missed list), and the song “Shoe Fits” climbed all the way up to No. 7 on Amazon’s The Best Songs of 2011 list. Not bad for a band you most likely haven’t heard of–yet.

“For some [artists] like Jay-Z or people like that, they probably don’t think about the Amazon Top 100, but for us that’s huge,” Ellsworth says. Coincidentally, Ellsworth and the Great Lakes edged past the megastar rapper on The Best Songs of 2011 list. Jay-Z’s “Niggas in Paris” (from Watch the Throne) landed at No. 8 on the list.

“Amazon and iTunes are becoming tastemakers for people,” Ellsworth continues. “In the past it was record stores, but now it’s online record stores.”

Ironically, Civilized Man is more of a throwback album, not at all exemplary of the single-driven releases of the digital age. At 12 tracks and over an hour in length, the album feels like the grand pop/rock long players of old. Imbued with a solid groove and a warm sound, Civilized Man begs you to shut off the shuffle play for once and to be ingested en masse.

“I think that our favorite bands, and the bands that are making the most interesting music, are still focusing on making a really solid album,” Ellsworth says. “People tell us that you could listen to 1, 5, 12, in that order, and it feels like they could come from different albums, but if you listen to it all the way through from start to finish, it feels like an intentional album, and it feels like it was meant to be listened to in that order. That’s how my favorite albums are, and I think that’s what we strive for.”

Submerge spoke with Ellsworth while he and the band had a couple days off in Nashville before heading out on a jam-packed string of dates that would take them to the Pacific coast and back. In the following interview, we discuss working with Nevers, Ellsworth’s appearance on the NBC reality television show The Sing Off and how the singer/songwriter found his voice in the band dynamic.

Did Mark Nevers contribute a lot of ideas when it came to recording?
A little bit. We sort of came in wanting to produce it more ourselves and call the shots as to what would end up on the record. What he contributed, and what I most love and know about him, is the sounds he captures on albums. The way he’s able to capture a warm, organic sound. What we do is a little bit different than who he usually works with, but we wanted to take that sound, that warm, organic vibe, and apply it to our more rock/pop material.

Listening to the album, I was thinking that it really feels like a live album. It seems very spontaneous. Were a lot of things done in one take?
That was something that we tried for. We tried to do as much of it live as we could. It’s interesting. I like when people listen to that and take that from the album, because we get a lot of people–and maybe that’s to our drummer’s credit–that say we use tracks, or electronic stuff, but 90 percent of what you hear on the album was tracked live.

Do you feel with the first album released that things are falling into place? Do you feel like you know where you want to go with the next record?
Yeah, I guess the last year and a half with making the album and working on these songs as a band has been a whole new process. I left for a few months to do a television show and to come back from that and have a new guitar player and come back to these songs and take them on the road, the songs have taken on a new life and a new energy. It’s never felt more like a band than it does now. It’s exciting every time we play, we get more excited about the next time we’re going to play.

Is this kind of touring schedule new for you guys?
It’s definitely new from a band standpoint. We’ve done some small-scale stuff while we were working on this material. Prior to that, I was doing more of a solo artist thing, which is completely different. It just wasn’t the right thing… It took me doing that to get to this point. This is what I’m supposed to be doing. This is how I always imagined it.

What is it about being a part of a band that works for you more than being a solo artist?
I think doing the solo artist thing, and being in Nashville and being just out of music school, I was writing to mimic something… It was less original. It never felt like the right thing, and I was all over the place stylistically. I always would imagine things with a band or imagine how much better it would be to have a band to bounce ideas off of. I think that’s the thing, having these people who you trust to bounce ideas off of and really fuse everyone’s different influences into making something that takes on a life of its own as opposed to me sitting down by myself and trying to come up with something.

Nashville is a big country songwriter kind of place. Was that what you were trying to do when you were out of school?
Yeah, a little bit of that. Not so much in the country scene, but I thought maybe my place was in the pop singer/songwriter scene out of Nashville. But my songs were never singer/songwriter-y, pop-y enough. They were a little too weird for that, but not weird enough that they really felt original or truly mine in a weird sort of way.

I wanted to ask you about The Sing Off. You were there with a group called The Collective. What was that experience like?
That was kind of crazy. A friend of ours who’s an artist in Nashville named Jeremy Lister, he was on the show. He was in the group called Street Corner Symphony that got second place in season two. He sort of approached us and said, “Hey, the producers of the show thought it would be cool to get some of my favorite Nashville artists and put together a group who have never done a capella before and sort of see what happens.” We were all pretty skeptical. Some of us had sung a capella before, mostly back in high school in choir, but certainly we hadn’t sung together as a group. We all knew of each other, but most of us didn’t know each other. We did a few hours of rehearsing and singing, and it sounded really good… We made a video of it and sent it off to the producers, and the very next day they were like, “We love it. We want you guys on the show.” It was literally last minute. A few weeks after that, we were on a plane to Los Angeles like, “What the hell are we doing?”

There was another guy in the group who has a rock band similar to what we do, so far from a capella music, and everyone else were successful singer/songwriters. It was so far out of the box for everybody to take that on, but we went out there. It sounds silly to say, but episode one of The Sing Off was our first performance as an a capella group ever, aside from making our audition tape. All things considered, we all went out there and dove right into it and figured out how we worked musically and how we best arranged together. We made it to eighth place. We got six episodes into the season [season three].

Was it a positive experience?
Yeah it was. I don’t know if it’s something I’d ever do again. It was certainly never my plan to do a reality show, and definitely not an a capella at that. But it was a really great experience. There was a lot of talent on that show. You know, you have the bullshit that goes along with the TV side of things and what they’re trying to do, but the music director and the music team on that show, they were so dedicated to the music. That was cool to see.

We would never do anything like that in our personal careers, but to set that aside and just sort of do that thing together, it was a lot of fun.

Daniel Ellsworth and the Great Lakes’ trek around the country will take them through Sacramento on Valentine’s Day (Feb. 14) when the band plays The Torch Club (904 15th Street). The show starts at 6:30 p.m. Show them some love. You’ll be glad you did. For more about the band and to order their album, go to Danielellsworthandthegreatlakes.com.