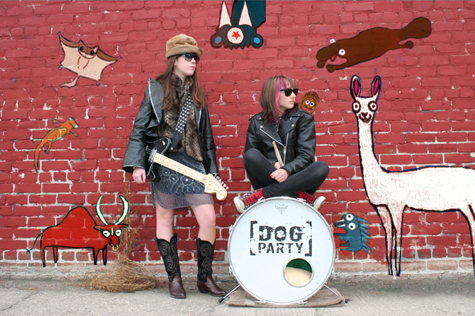 What do teens and preteens do these days? What are they into? One could guess: Twilight? The Kardashians? Justin Bieber?

Local sister duo Lucy and Gwendolyn Giles have been playing in their rock band Dog Party since they were only 9 and 11 years old, respectively. Now Gwendolyn is a sophomore in high school, and Lucy will have her first taste of high school starting next year. At 13 and 15 years old, they are preparing for release of their second album, P.A.R.T.Y!!!, which they spent a good half year recording.

The Giles’ mother drove the two to Shine cafÃ© in downtown Sacramento for an interview with Submerge about their upcoming release. They look older than they do in the pictures. Bits of bright purple and pink flash from underneath Lucy’s brown bob. She is wearing a Ramones shirt beneath a black pleather jacket with skinny jeans and Chucks–a Joan Jett in the making. Gwendolyn appears a bit more subtle, dressed in a gray hoodie, jeans, Saucony tennies and a checker belt.

One thing you should know about these girls is their musical upbringing. Their father, bless his soul, chose to introduce the two to “good” music at an incredibly young age–their musical tastes include The White Stripes, The Black Keys, the Beatles, the Ramones, the Beach Boys, Green Day, LCD Soundsystem and CSS.

Take a listen to P.A.R.T.Y!!! and you get the idea. From the screeching of Gwendolyn’s phaser pedal on the album’s first track, “That’s What You Said,” the sisters brandish their rock roots. But in the midst of the album’s power chords and cowbell taps, other songs expose a folksier side, like “Mixed Up Lovers,” or a gypsy punk flare, like “Red Ribbon.” Lucy was listening to a lot of Gogol Bordello at the time, she discloses.

Then there is “Memories,” which is by far the hardest song on the album, plunging into a metal sound. It’s about not being able to ski in the summer, Lucy says to me. Note that most of their songs are not so melancholy. They sing about the likes of a furry friend on “Chih-Iro,” for example, or their photographer acquaintance on “Andy Wu.”

Regardless of whatever sound they’re going for on a given day, they have always loved music, they say. Gwendolyn had picked up the guitar and was playing talent shows at school by fifth grade. Lucy wasn’t far behind. Looking to Meg White of The White Stripes for inspiration, Lucy wanted to play the drums as early as first grade, she remembers.

“I thought it was normal to be a girl drummer,” Lucy says.

Her dad bought her a Reuther drum set that year, but she would have to wait until third grade before she could take drum lessons.

Unlike many of their peers, they managed to escape the magnetism of Miley Cyrus or Kelly Clarkson. With a little push from family friend Zach Goodin, they formed Dog Party in 2007 instead.

The White Stripes and The Ramones are high on their influence list, the latter of which Lucy admits an obsession with. While the girls were in Southern California for a photo shoot with Tom Tom Magazine over the summer, she insisted that her family stop at the Hollywood Forever Cemetery to see Dee Dee and Johnny Ramones’ graves. An artist as well, she pulls out her phone to show pictures of stencils she made of each Ramone’s face.

“I don’t like being in the ‘burbs,” pipes Lucy.

This is not to say that the girls don’t have friends their age. Ski team and cross country help to keep the girls socially connected. In fact, ski racing in Squaw Valley was one reason why the album took so long to record, since often the girls only could record one to two days a week.

But when it comes to playing music with friends their age, the pickings are slim, they say. The kids at school are mostly “band people,” Lucy states dismissively. Rather, the two find musical support from Midtown musicians, namely adults. They’ve played a number of shows with Kepi Ghoulie, who just released an album himself. In fact, the Giles family had just spent their past Sunday at Bottom of the Hill in San Francisco for Kepi’s show.

Goodin has been helpful schooling the girls on gear. They rattle off gear specifics with ease. Gwendolyn rotates between her sister’s Fender Squire Strat, a couple of Silvertones, and a Hofner paired with a Fender Pro Reverb amp and Marshall cabinet.

Goodin also released P.A.R.T.Y!!! on his label, Half of Nothing records.

The girls have grown accustomed to playing with musicians older than themselves. In addition to Dog Party, they are also half of Sacramento band Little Medusas with two older counterparts.

They also just completed a two-week tour through Arizona, New Mexico and Southern California over the summer with Ghoulie and Sacramento band Pets, playing half their shows in houses and the other half in bars. By far, their best show was at a house party in Flagstaff, Ariz., Lucy says, because people were actually moving instead of just standing around the way people tend to do at Sacramento shows.

Here in town, the girls are also accustomed to playing house shows. They have garnered enough local notoriety to play for the last three years at Concert in the Park at Cesar Chavez. Luigi’s is a favorite all-ages venue. Aside from that, there are only so many 21-and-up venues the girls can get into at ages 15 and 13. Old Ironsides is no longer one of them.

“We used to play Old Ironsides all the time. Now we can’t,” Lucy says.

All in good time, we can hope. The girls make it clear that music is a crucial part of their life–not just a phase.

Gwendolyn acknowledges that she will likely go to college in the future. But her intentions remain the same.

“We will play forever,” she says.

Dog Party will celebrate the release of P.A.R.T.Y!!! at Luigi’s Fungarden on Dec. 30, 2011. Also playing will be Kepi Ghoulie and Nacho Business. P.A.R.T.Y!!! will be available on CD and pink vinyl! For more info, look up the band on Facebook, or go to Dogpartyrocks.tumblr.com.