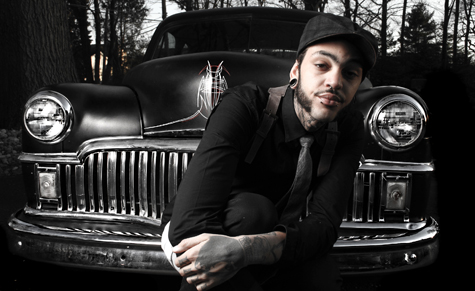 When a front person for a popular band decides to put out a solo album, it always feels like his or her band days are over. Travie McCoy of Gym Class Heroes, however, seems determined to refrain from pulling a Stefani and stay put with the group that made him a star.

“I don’t necessarily look at Lazarus as me going solo, per se. It was more of a side project put out on a bigger scale,” McCoy asserts from his home, lounging on his couch with his dogs, feeling lucky that he has a couple of weeks off to enjoy himself before heading back out on the road.

Lazarus, McCoy’s first “solo” album, was released in June 2010, and had all the elements of a star-making effort. A high-profile team of writers, producers and guest performers were recruited for the album, including T-Pain, Bruno Mars, The Smeezingtons and Cee-Lo Green. Still, even with all these fancy new toys at his disposal, McCoy says he still yearned to have his band around him.

However, his instincts as a performer eventually kicked in.

“Once you realize that you’re there to perform and make sure the people who paid good money for those tickets leave feeling like they were a part of something, an experience,” McCoy says, “you snap out of it. You realize you’re there to have fun too.”

The majority of the music on Lazarus would certainly seem to facilitate a good time. As McCoy’s collaborators on the project would suggest, the album certainly has a feel-good vibe (exemplified by the opening track “Dr. Feel Good,” which features Cee-Lo on the hook) and a glossy pop sheen. McCoy says he has great respect for multi-faceted artists such as Mars and T-Pain who are able to write, produce and perform, but he’s not so much enamored with the idea of being an all-in-one recording artist as he is with Gym Class Heroes’ band dynamic.

“I look up to guys like [Mars and T-Pain],” McCoy says. “I wish I had the time to do all that stuff, but at the same time, there’s this organic kind of bond musically that I have with my band… We all pitch our two cents in, and I think that’s what makes Gym Class Heroes special. You have four guys from four different backgrounds listening to all kinds of music. The common ground is Gym Class Heroes, and I wouldn’t trade that for anything.”

McCoy took the time to answer a few of our questions and, among other topics, talked about his life-changing experience working with MTV’s Staying Alive Foundation, a global grant-making organization that aims to “encourage, energize, and empower young people who are involved in HIV/AIDS awareness, education and prevention campaigns.” McCoy is an official ambassador of the foundation, and his travels to raise HIV/AIDS awareness in Philippines, India and South Africa were chronicled in the short documentary “The Unbeaten Track.” More info on MTV’s Staying Alive Foundation can be found at Staying-alive.org.

The album had a few guest appearances. How do you arrange the songs for the live setting?
Obviously, I can’t have Bruno come out every night, so we have tracks set up and whatnot. For the most part, though, when we play “Billionaire,” I can’t hear myself over the crowd. Every night, the crowd takes Bruno’s place. I’m lucky in that aspect. With the other songs, we usually just cover the ground ourselves, just me and the band.

“Billionaire” was a big hit for you. When you recorded that track, did you have an inkling that it was going to catch on the way it did?
I think it’s tough to guess what people are going to gravitate toward and relate to, or what’s going to become a hit record. It’s always up to the public, I guess, but with that song in particular, after we recorded “Billionaire,” we all looked at each other like, woah. There’s definitely something special about that song. It ended up being a smash, so I can’t really complain.

The track has a positive message. The title might suggest that it’s all about material wealth, but it’s not. I saw the documentary you did with MTV’s Staying Alive Foundation, where they sent you to South Africa, India and the Philippines. Did that have an effect on that song?
Oh for sure, and on life in general. It makes you see things in a new light. That trip changed my life in general as far as not taking things for granted. It definitely had an effect musically as well. As far as my lyrics go, I tend to write about my life for the most part–things that I see and how I feel about things. That trip had a huge effect on me, the people I met, the things I saw… I think it would affect anyone. It definitely made its way onto my record in many different ways.

I saw that you were taking in the local flavor as well on that trip, seeing local bands and things like that. Did the sounds you heard stick with you when you went into the studio as well?
Totally. “Billionaire” sort of has an island vibe, like a reggae feel. Other songs have percussive elements that I heard in Africa, even. It was sensory overload. Being there for a good cause, but also being privileged enough to check out the local music scenes.

You’re working on a new Gym Class Heroes record now. How is that going?
Yeah, we started working on the record a while ago. We’re deep in the process now. We’re looking to put it out by the end of the summer. We have about 30 demos–when I say demos, it can mean songs that are pretty much complete, partial songs, jams that we might pull certain ideas from. There’s a lot of material that we can pull from, but after this tour I have coming up is over and the smoke settles and we get back together and start working on the album again, it’s going to be awesome. We just had a week-and-a-half session in New Jersey, and we put it up on Ustream with the sound off so people could watch what we were doing. At the end of the session, we’d play an old Gym Class song, just as a gift to the viewers for hanging in and checking us out. That’s one thing about Gym Class Heroes as well that keeps our fans stoked is that we try to stay as close to our fans as possible, be it via the Internet or at shows. We have a really cool relationship with our fans.

I saw that last year you were arrested in Berlin for tagging the Berlin Wall. I guess if you’re going to get arrested, that’s a pretty cool way to do so. Was that something where you said to yourself, “When I get to Berlin, this is what I want to do?”
It wasn’t anything that was premeditated. I’ve been writing graffiti since I was 7 or 8 years old, so I just saw an opportunity and took it, and unfortunately, I got caught and paid the price. But it is what it is. It was funny, because the next day there were pictures of kids in front of the piece I did. I guess in a sense, I made my little mark. At the same time, it was no disrespect to my German fans. The Berlin Wall is a huge piece of history. I was told by someone that it wasn’t illegal. There’s graffiti all over it, so I had the mindset it was fine–until I got arrested [laughs]. 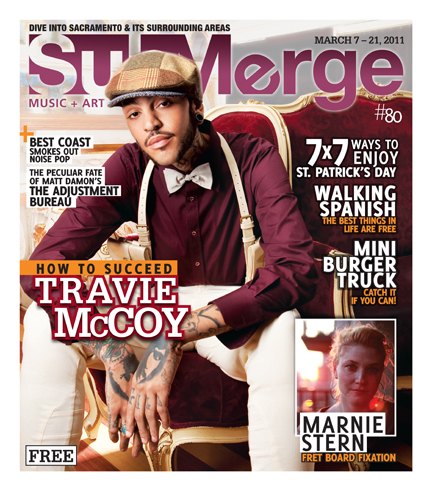 Travie McCoy will play Ace of Spades on April 1. Also appearing will be Donnis, Black Cards (Pete Wentz of Fall Out Boy’s new band), XV and Bad Rabbits. Tickets can be purchased through McCoy’s official website, the aptly titled Traviemccoy.com or Aceofspadessac.com.