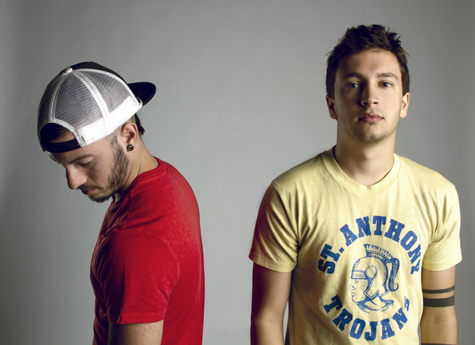 Drummer Josh Dun sounds a bit winded during our interview, but that’s understandable. One half of one of 2013’s bands to watch (according to MTV) just got off stage. He and Tyler Joseph, collectively known as Twenty One Pilots, played to a sold-out crowd in Bowling Green, Ohio, just minutes before our interview.

Twenty One Pilots are known for its high-energy live show, which may feature Dun playing his kit in the crowd or Joseph back flipping from his piano into the audience. It’s a perfect compliment to their explosively catchy blend of hip-hop, hardcore and electronica. It’s also the formula that has garnered the Columbus, Ohio-based twosome some much deserved attention and a slot on star-building label Fueled by Ramen. Though Dun admits that he and Joseph really didn’t know what they were getting themselves into when they embarked upon this wild ride, he’s excited that they’re on the cusp of realizing their wildest dreams.

Just a year ago, Twenty One Pilots played Bowling Green to a much different crowd. Dun says the group was in the small Ohio college town, thrown in perhaps as an oddity in a hip-hop festival. It’s funny how fast things can change.

“No one knew who we were, and there were maybe 30 people there,” Dun says. “So it’s kind of cool to come back a year later and sell out this little club.”

It was selling out a show in Ohio that got Twenty One Pilots to where they’re at now. A packed venue in the band’s hometown got the ball rolling, and labels began to take notice.

“We didn’t think that was that big of a deal, but that caught the attention of the industry,” Dun says. “So then a couple weeks after that, we had a little over a dozen record labels that sent us emails and said that they were interested in signing us.”

Dun and Joseph spent the ensuing months flying back and forth to Los Angeles and New York, meeting with various labels.

“Even then, Tyler and I didn’t know what that all meant,” Dun admits.

Eventually they settled on Fueled by Ramen, the label that sent bands such as Fall Out Boy, Panic! At the Disco and Fun into major stardom.

“Ever since the beginning, we worked really hard to brand ourselves as a band,” Dun says of the decision to go with Fueled by Ramen. “I haven’t seen that done a whole lot. There are a few bands that really stick out as far as branding themselves, like where the logo is more recognizable than the band name… That’s what we were into from the beginning. Fueled by Ramen I think has done a really good job of branding itself as a label. We really connected with that.”

Twenty One Pilots began their “branding” with an easily recognizable logo, which looks something like this: |-/. It was created by Joseph’s roommate, Mark, who’s been supporting the band since the beginning.

“He’s all things creative to us,” Dun says of Mark, who’s also created videos for the band. “He’s been there since day one. I don’t think we’d be where we are without him.”

More than just a recognizable mark, the logo also holds significance for the band members.

“It has a couple of meanings. There’s a lot of tension and struggle and battle within ourselves and each other every day,” Dun says.

“At the same time, this logo, this obscure design, there’s something we’ve come up with where if you create something, and you’re all alone, whether it’s a painting or a song or whatever. If you create something where only you can understand the full meaning of it, is the beginning of finding purpose for yourself and your life. The logo represents that in the sense that only we totally understand what it means. It means Twenty One Pilots, and it represents purpose and creativity.”

In 2012, Twenty One Pilots released their Fueled by Ramen debut, Vessel, an album as rife with struggle as it is infectious. Hip-hop beats clash with sugary pop, as rapping gives way to clean and even screamed vocals. Heavy electronic beats collide against symphonic passages. The most amazing thing about it is how it all works. This isn’t a sort of Franken-music situation, where a multitude of styles are stitched together into an awkward monstrosity. Instead, it seems to acknowledge the commonality between all forms of popular music and exploits that to wonderful effect.

Vessel was recorded in Los Angeles with producer Greg Wells and engineer Ian MacGregor. Prior to this debut, Twenty One Pilots recorded their music in Joseph’s basement studio. Stepping up into an actual recording facility was a new experience for the band, and one that Dun says the band entered into with some measure of fear.

“It was scary at first,” Dun says. “In the basement, as much as we didn’t know what we were doing, we had complete control over what sounds we had to work with and the direction of the song.”

It didn’t take long for Wells and MacGregor to quell that fear, however. Wells, who has worked with Weezer and Adele in the past, proved to be the perfect person to guide Twenty One Pilots through the intimidating process of making its first proper studio album. Dun says Wells and MacGregor added ideas while incorporating what Dun and Joseph had worked on in their basement, fortifying the structure of what made Twenty One Pilots popular in their hometown in the first place.

“The best thing about Greg was that he loved it from the beginning, and he wanted to keep the integrity of what it is that we did in Tyler’s basement,” Dun says. “We’ve got a lot of the same programming on the album and even some of the same vocal takes that were done in Tyler’s basement. What we weren’t skilled in was making it sound bigger and fuller and getting the live drums captured.

“He put such tasteful ideas into the songs,” Dun continues in praise of Wells. “[He and McGregor] are both just so good at what they do. Greg would come in and work his magic on these songs and make them sound the way that we wanted them to. They both interjected their ideas, and we all worked together really well. Those things are really the main fears that we had going into the studio and handing over the reigns to somebody else.”

As for how the band’s mindset has changed now that they’re out of the basement and poised for the big time, Dun says, for the most part, the status quo remains. Twenty One Pilots’ live show is still their bread and butter. It even affects how their music is written, as Dun explains the band’s outlandish stage stunts sometimes influence the directions of their songs. Though they may have more eyes and ears pointed in their direction, Dun says he and Joseph haven’t deviated from the course they set out upon when they started Twenty One Pilots.

“We’re working harder now and playing a lot more,” Dun says. “But…we’re just going to go up there, just the two of us, and go completely nuts and lose our minds with a bunch of people. But we’re still shooting for things as big as we can dream of.” 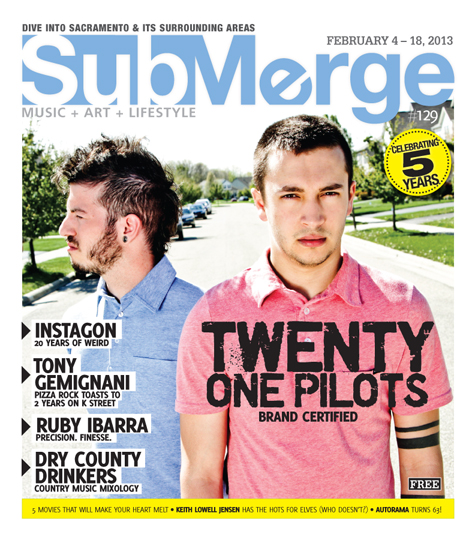 Watch dreams come true when Twenty One Pilots play Sacramento State’s University Union Ballroom on Feb. 19, 2013. The show starts at 7:30 p.m. and tickets can be purchased through the band’s official website Twentyonepilots.com.