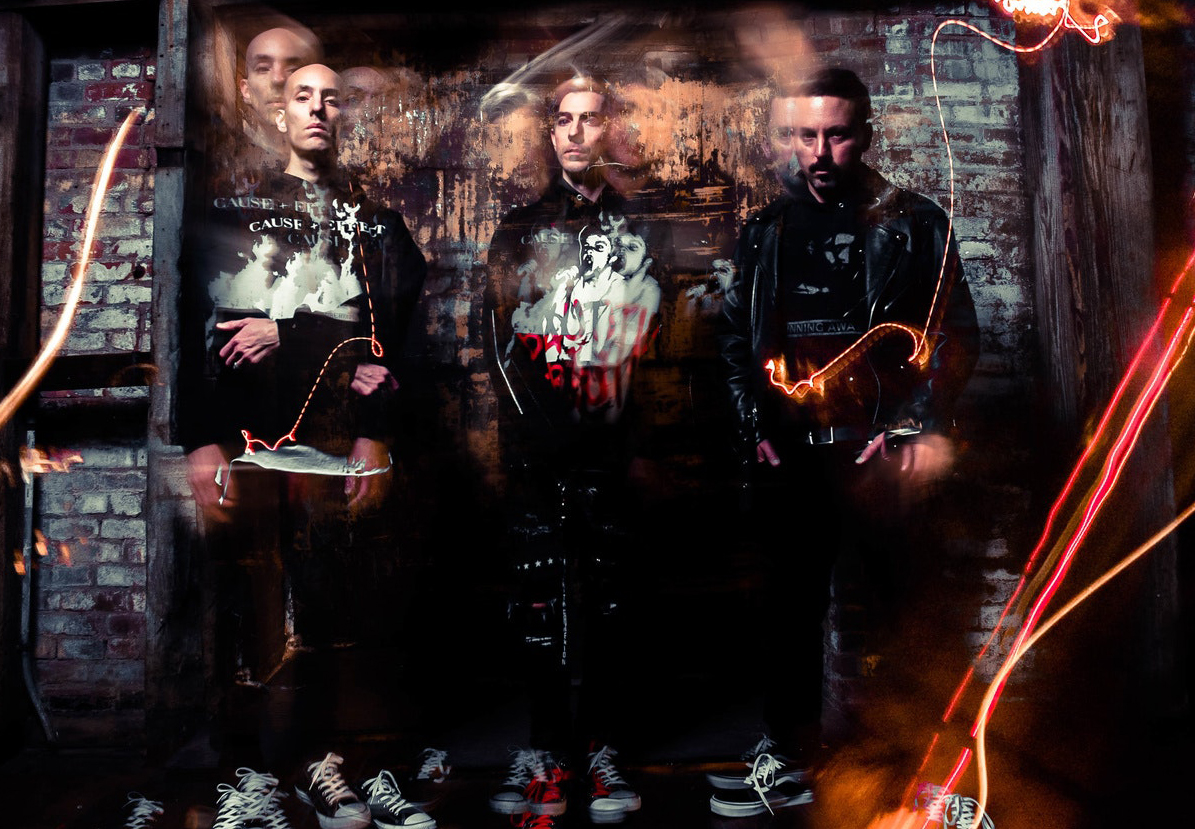 Dub Trio founding members Stu Brooks (bass) and DP Holmes (guitar) grew up in the Great White North of Canada, but met while attending college on the East Coast. While in their previous band, Actual Proof in New York, Brooks and Holmes were in need of a drummer and put out an ad. Drummer Joe Tomino answered the call and was the first to audition. He got the gig. Nineteen years ago. The three began playing shows all over New York and grew an admiration for dub, ambient and electronic music styles. In 2004, Brooks met the head of ROIR Records, Lucas Cooper, who released Dub Trio’s debut album Exploring the Dangers Of. As the band progressed, their musical tastes influenced their direction.

Brooks states, “When we wrote New Heavy [2006], we were leaning toward a more punk style and Another Sound is Dying released a couple years later was more metal and noisy sounding. Our spectrum widened and we had no boundaries. We didn’t limit ourselves stylistically because it was a passion project.”

Digesting the tunes of Dub Trio is not unlike sampling every item at a potluck and being intrigued with every flavor, not knowing which route to double back to, but being satisfied with every bite. The mood and style of their music varies at the drop of a dime from song to song or even within the same track. As displayed on their new record, The Shape of Dub to Come, opener “World of Inconvenience” forces the listener in from the starting gate with Holmes and Brooks’ heavy metal inspired sonic riffs.

After this introduction, the song drops into an eerie, crawling landscape, with signature guest vocals supplied by Melvins legend Buzz Osborne. The song then abruptly halts when dub/reggae tones creep in with Tomino’s mystical drum beats. The band also recruited friend Troy Sanders (Mastodon) to sing on “Fought the Line.” Brooks mentions while there was an eight-year gap in between Dub Trio’s previous album, IV, and The Shape of Dub to Come, “Forget My Name Dub” was written and recorded as far back as 2014.

While it appears the band was on hiatus, the members certainly were not. Brooks says, “We put out an album in Dub Trio every two years in a 10-year span, toured in Matisyahu and in Peeping Tom, amongst other projects, so it was time for a break.”

It is apparent that Dub Trio is a group who believes in mastering their craft while staying in optimal physical and mental states. All three members adhere to a vegan diet and stringent exercise routines, especially making efforts to stay sharp on tour. This strong sense of self reflects in their attention to detail harmoniously throughout their catalogue. When describing their intricate live performances, Brooks states, “Years of playing together has helped us be on the same wavelength. It’s all about memorization and almost becomes second nature”.

Brooks provides insight into the band’s exceptional methods of live dubbing, shares advice on staying humble and explains some tricks on maintaining a “healthy” band.

Your music is a unique mix of dub and metal, amongst other genres. Was there a conscious effort to blend these specific styles?
We spent over 10 years touring together as a rhythm section and then as a backing band for Matisyahu and would open shows for him. We were digging artists like King Tubby, Scientist, Sly and Robbie and would try to mimic them. We’d do our own live dubbing, which was a unique thing for us. Our name can be a bit confusing, because we’re stylistically more of a metal band. The mystique can work to our advantage because we can play with metal or reggae type bands. We’re doing some dates with Incubus in September, and they’re not either style.

Can you further explain your execution of live dubbing?
[DP] and I would get a send from the drums with a microphone on the snare or hi-hat region and have it sent to a volume pedal, which would then keep it muted. But when I’d open it to effect the drums, I’d turn up the volume pedal that would send the signal to a chain of traditional effects sounds in dub such as reverb, delay, phasers or filters on the drums. I could simply open the microphone with my foot pedal while playing the bass. Joe would do a similar thing to himself where he’d play one handed and manipulate the effects with his other hand.

The live dubbing process seems pretty elaborate and atypical. Have you known of other groups to do this?
It’s a pretty rare thing to do. Live shows usually have a front of house sound engineer creating the dub. With a studio recording, the dub is usually produced in the control room by the engineer. We do this live and have more control to react to each other’s effects and moves we make. The dub becomes another instrument and voice for us on stage. We are able to create a musical dialogue by using a call and response, delay on the drums or reverb. We’re able to improvise live form, arrangement and effects making each individual show unique.

A certain amount of energy must be necessary to pull off these feats live. How do you stay fit and focused on tour, and does your collective lifestyle reflect this?
We all adhere to vegan diets. Yoga, meditation and exercise are all part of our routines. It’s important for us to stay in shape both physically and mentally. The touring lifestyle can be taxing on body and mind. If it’s a bus tour, the driving happens at night, so there’s lots of time in the morning to go on a hike, ride a bike or do yoga. But when touring in a van or flying, you’re mostly traveling during the day and getting minimal sleep, so maybe you can exercise at a hotel, but the key is to make the best use of time while trying to stay sane. Instead of burning out, we’d like to thrive into old age.

You’ve worked with an impressive mix of household names over the years. At what point did you realize you wanted to do production work?
We all began playing instruments at a fairly young age. Joe followed in his father’s footsteps by learning the drums. I wanted to get involved in all aspects of the industry including production, composition, music director and band member. I wanted music to be a full time job and something that could sustain forever in my life. Maybe I won’t be able to tour into my sixties or seventies, but could still perhaps continue my studio career at that point.

What changes have you noticed in the music industry in the last couple decades?
The accessibility for people to make and record music at home on a computer has increased so much that the value has gone down. At the same time, more people are able to be creative and heard. AutoTune has made it easier for people to come up with a presentable vocal track with this effect and not necessarily need any training to sound in tune.

Big cities have become gentrified and it’s harder for musicians to afford living in New York, hence a mass exodus of people such as myself relocating to other places like Los Angeles. People aren’t buying records but live performances seem to be on the rise, so you’ve got to hit the road as a musician. On one hand it’s more of a struggle, and on the other hand it’s less of a struggle.

Where did the title for new record The Shape of Dub to Come originate?
We pay homage to The Shape of Punk to Come by Refused, which influenced us heavily early in our career, and The Shape of Jazz to Come by Ornette Coleman. A friend suggested the album title and we knew “that’s it!” It’s a sentimental feeling and that process is there but being applied to different genres, not restricted to reggae. We love artists ranging from King Tubby to Aphex Twin to Meshuggah.

Do you feel this is your best album to date?
It’s an accurate representation and reflection of where we’re at now, plus a new era for us; being the first record we’ve done all living in different cities. We spent much more time together leading up to recordings in the past. This time around, we had three days prior to rehearse and dial in the song forms. Perhaps we had more nerves or apprehension. During this record we were performing on the edge of comfortability.

What are some of the most valuable lessons you’ve learned?
My bass mentor John Prakash who played with Lou Reed, Parliament Funkadelic, etc., said, “Stay humble and gracious.” That’s a huge lesson that stuck with me. It’s very important to keep your ego in check and be grateful to be able to live life and make music.

What is the greatest compliment you’ve received?
I met a fan recently that saw Dub Trio in 2006. He said him and his wife had to leave because she was going to barf because of the bass.

For the uninitiated, Dub Trio is amazing live! You’ll get your chance to see them in action Sunday, Sept. 22, 2019, at Blue Lamp (1400 Alhambra Blvd.). Doors are at 7 p.m. and the show kicks off at 8. Tickets are $15 for those 21 and over. For more information, visit Bluelampsacramento.com.