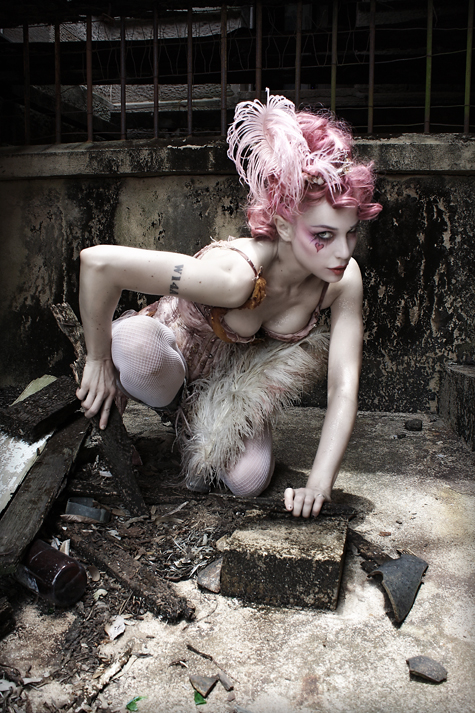 Emilie Autumn has created albums, crossed over to film and wrote a novel, but her whole career has lead up to this

It’s 7 p.m. on a Thursday night, and Emilie Autumn is excited.

She just got off the phone with director Darren Lynn Bousman, the macabre visionary behind Repo! The Genetic Opera and more recently The Devil’s Carnival, a film in which Autumn stars as The Painted Doll. Bousman just called to let Autumn know that he was finishing up the final cut of the video for “Fight Like a Girl,” the title track to her most recent album, a sort of pop-goth invigoration of Broadway musicals numbering 17 tracks.

“He’s flipping out,” Autumn says of her conversation with Bousman. “He’s like, ‘This is the best thing I’ve ever done.’”

The video, not yet released as of this writing, is more of a mini movie according to Autumn. From her description, “mini movie” sounds like a bit of an understatement. She says the video was shot in a “massive” eight-story Victorian theater in Los Angeles. In the video, she portrays a rebellious inmate who battles brutish orderlies for control of an asylum.

“We built this entire world with three levels,” she explains. “I did all my own stunts, as did we all…and I have the bruises to show for it still. I’m super proud of it, but it was kind of out of control.

“In the beginning, I get beaten up a lot and thrown to the floor, and of course, you have to do a million takes of that because you have to get Emilie being thrown to the floor from all angles; and Emilie getting smashed against the floor from all angles,” she continues. One entire day was me getting beaten up, and the second day was me transforming myself and the other inmates into the gorgeous mohawked warrior princesses who take over the theater, interrupt this ridiculous show that’s going on and kill a bunch of people.”

She chooses to stay mum on the video’s surprise ending, but it’s one of the few things Autumn isn’t open to talk about during our conversation. In fact, early on, she even turns the tables, asking me questions about how my day was and just my life in general. It’s a dizzying experience to speak with Autumn. She’s strange mix of brash and cocky yet utterly charming; a bit self-involved but genuinely curious about others.

This fascinating dichotomy shouldn’t come as any surprise to any one who’s followed Autumn’s career. She’s a sort of a living harlequin doll whose soaring voice and preternatural chops on the violin are equally as jaw dropping as her onstage appearance and elaborate stage shows. She’s style and substance–a rare but potent combination.

Autumn has currently embarked upon another stint on the road in support of Fight Like a Girl. In true Autumn fashion, she and her all-female backing band The Bloody Crumpets will be creating a full-on musical as opposed to your traditional rock show. In fact, Fight Like a Girl is a sort of pre-cursor to a full-blown musical that Autumn plans to unveil in 2014.

The full-length musical she’s working on is based on her 2010 novel, The Asylum for Wayward Girls, a fictional account of Autumn’s real-life institutionalization and bipolar disorder.

“The album is about one-third of the musical,” which will eventually reach the three-hour mark, she says.

Following suit, you can consider her current tour a teaser for what is to come, which is still evolving. Autumn reports that the show they’re taking on the road this time around is wildly different than what she and her band unleashed upon audiences last year.

“It’s new costumes, new sets, new songs,” she says. “It’s all on the next level. The girls and I are out of our minds with excitement to get on stage and perform it for everybody. It’s like it’s the most exciting thing that has ever happened.”

Hyperbole aside, it’s easy to understand why she’s so amped up. Autumn says the idea to turn The Asylum… into something more than the book came during the writing process. She decided that she should use all of her talents–writing, songwriting, performing, costuming and set design–to bring her vision to full fruition.

“It was just like, how did I ever think of anything else? Of course, this is a musical. That’s been my ultimate destiny,” she says.

Autumn believes that the next logical step from musical will be an Asylum… movie. And so, the artist has been getting more experience in front of the camera to prepare for that eventuality. She says she has a few film projects forthcoming this year, most notably Bousman’s The Devil’s Carnival 2, in which Autumn will have a very prominent role.

“When I was first asked to do Carnival a couple of years ago, when they were first putting together the idea for it, I thought, OK, I have no idea if this is going to be embarrassing or not or who else was going to be in it, because I was the first person to sign on and say yes,” she says. “Of course, I’m thrilled that it’s this beautiful, incredible art piece, but I didn’t know that at the time. Why I signed on was because I thought, OK, I need practice for The Asylum… movie, because when I do that, I don’t want to fuck it up. You don’t get a second chance to make a movie, and I want to make sure I know what the hell I’m doing.”

Autumn also sees the current tour as good practice toward her ultimate goal, but that doesn’t mean if you catch her and The Bloody Crumpets on the road that you’ll see the rock ‘n’ roll equivalent of a rough-shod tech rehearsal. Though she has her sights set on bigger things, Autumn says she and her band are determined to bring it each and every night.

“What we work with every day on tour with the idea being the audience must never know that this is a compromised version of what I want,” she says. “They must always think this is the best show they have ever seen on the face of the planet. That’s our job, to make every thing seem on-purpose, totally intentional.”

Autumn believes that the first step of making her dream come true is visualizing it in her mind. The Asylum for Wayward Girls will open at London’s West End Theatre in 2014. From there, she wants to bring the full-scale show to New York, Los Angeles and beyond before bringing it to the screen.

“I’m trying to be very detailed with what I want, because that is how you manifest things–to create them in your mind and make them real, and then build the reality around that,” she says. “That’s how The Asylum… happened. It was real to me, and now it’s real to so many different people, because I just really committed to that reality. I think this is the next version of that reality.”

Autumn’s “ultimate destiny” may still be quite a way off, but it’s rapidly approaching on her horizon.

If that’s her goal, then it’s already mission accomplished. If that’s not something to be excited about, I’m not sure what is.

See the spectacle that is Emilie Autumn live at The Colonial Theatre on Feb. 1, 2013, presented by the Sacramento Horror Film Festival. Doors open at 8 p.m., and tickets ($20) can be purchased through either http://emilieautumn.com/ or Sachorrorfilmfest.com.