Those mesmerized by the shimmering hooks of Empire of the Sun’s Walking on a Dream in 2008 were glimpsing merely the tip of an iceberg; back then, before a massive resurgence in EDM, festival culture and pulsating dance-floor escapism had fully hit mainstream pop music, the fledgling duo stood smartly poised over that creative precipice.

After nearly half a decade, caught up in runaway success and constantly touring the globe, the Australian duo finally managed to craft a sophomore album even more euphoric and dreamlike than the first, entitled Ice on the Dune. In the midst of growing popularity, they have branched out to explore their potential, getting involved with everything from composing for Cirque du Soleil, to providing the score for the upcoming sequel to Dumb and Dumber. Meanwhile, their distinct visual appearance and extravagant live shows help to draw in new fans (“Empyreans”) every day.

Empire’s power derives from two masterminds: Nick Littlemore, who previously crafted ahead-of-the-curve electronic music with Pnau, and Luke Steele, whose strong background in pop songwriting with The Sleepy Jackson ensured Empire’s destiny as a binary powerhouse of energy and tunefulness.

In the Empyrean universe, Steele is the Emperor to Littlemore’s Lord. Steele is best seen against the backdrop of a breathtaking, unearthly landscape, dressed to the nines in glowing turquoise uniform and striking headdress. Over the years, this key wardrobe feature has resembled a dynastic crown, a tribal diadem, a towering sculpture of the sun’s rays or, most recently, an intricate steel helmet styled somewhere in between samurai and interstellar monarch. It is an artifact of power from an artist, who without a shred of cynicism, wants his audience to be empowered.

Empowerment and escapism are Empire’s strengths, and Steele provides it in spades. Still, the man himself seems positively down to earth, collected. As bold a mission as this group has—to begin with an elaborate fantasia and expand outwards from there—Steele, an avid surfer at home, rides the waves of vision and doesn’t let an excess of imagination get the best of him. Family life, side projects (planning a feature-length film and reforming The Sleepy Jackson are just a few), and a sense of spirituality keep him balanced and thinking ahead.

In two weeks time, he and Littlemore will bring the world of Empire of the Sun to West Sacramento for this year’s bigger-than-ever TBD Fest. We reached out to Steele at a recording studio in his home country in order to catch up on the life and, perhaps, make sense of their massive, globe-spanning project. The sun never sets on Empire. 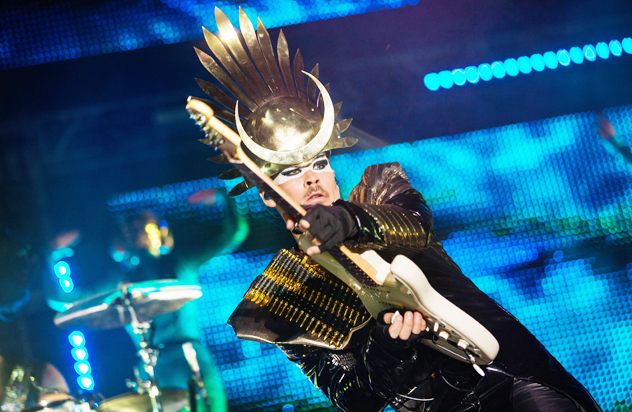 I understand it’s a cloudy mid-morning there in Sydney?
Yeah, it’s cloudy, but right now we’re at a pretty amazing recording studio out in the beautiful Australian bush, you know, so it’s pretty luxurious…

So you’re still working pretty hard even at home?
Yeah, I’m kind of like a frenetic farmer who’s constantly sowing, toiling the land.

You seem to get quite a bit of inspiration from the locations you travel to—just recently you played Seoul and Kuala Lumpur, and after some dates in California you’re headed to Dubai. Is there a particular city that’s captured your imagination the most?
For the last few years, I think Los Angeles has been my real love. I’m in love with the ocean—the intensity of the sea and the sunshine… And also that combined with this giant truckload of the world’s most inspiring artists and creators. It’s kind of like the gateway to the world, I guess.

Apart from the name itself, there seems to be a lot of solar themes within Empire of the Sun, like shooting videos in areas where the sun has been worshiped, among others. Is this deliberate? Have you always had a fascination with the sun?
I guess it wasn’t so planned. Back when we came up with the band name, but now when you say that…It’s kind of strange, with all these sort of coincidences. You know, my daughter’s called Sunny, I love Los Angeles… Maybe it’s that thing—you know, it says in the Bible, every strand of your hair, and every line on your palm is known before you were born. Everything you do… It’s obviously one of those things—we were meant to be called that.

So do you have a religious background?
Not a big background. I guess it’s just like, you’re put into the fire of the music jungle, you need a savior, or you’re gonna pretty much get swallowed up or fall into the pit. It’s such a dark world. And I kind of got worked over pretty good when I was young, in all kinds of ways, you know, losing my mind, to my heart, everything from money to sanity. Yeah, I guess that it’s been 10 years since I’ve been walking my own line with God and just asking for guidance. It’s sort of important, for this generation of music and artists. I’m a believer, and I just want to spread the word, you know? It’s important to have courage and spread the good news.

You seek out a great deal of powerful imagery, especially with the imperial motif and especially in landscapes. How do you manage location scouting?
We have about 3,000 [locations] written down, and it’s just about getting around to them all… It’s amazing how many places you can’t see, or that you really gotta seek out. Yeah, we try and find places that haven’t really been shot, and when we shot the “We Are the People” video in Mexico, no one had really taken a camera [in this particular place]. There was nothing there that used to be the “hangout place of Salvador Dali” or anything like that.

Is there anything about doing a show in a new city or country that changes the nature of your performance?
Yeah, it’s always strange in the hotter climates, a lot of the Asian countries, like Singapore, where it’s like a hundred degrees, and 80 percent humidity—so yeah, the music sounds a lot more sweaty [laughs].

You’ve mentioned that at the time Empire was starting out, it was kind of in reaction to the music scene in Australia at the time. What was it like?
In Australia you had ‘70s/’80s style rock bands. There was kind of a lull in the music world. It was kind of more us looking back at ourselves and saying, “Come on, you’ve been wearing too many clothes for too long, you gotta strip off some layers and get naked, get bare and raw, and step out of the boat and take a bit of a risk.” So we just went for it and tried to add as much color and as much flamboyancy and not be scared. I guess sometimes you can be scared and worried about trends, or whether things will fit.

Do you think the music world has sort of adapted from where it was then, maybe more in tune with what Empire is doing?
Yeah it’s always changing…but, hey, I was just thinking about this yesterday, the pop gets more pop, and everything else just sort of swims in the ocean, you know? It’s funny like some of this pop music now they kind of come out and classify it as liberating, but it’s one inch away from porn, you know? It’s like this balance of the devil in the commercial platter. It’s just the world we live in—heat gets hotter, everything gets faster and racier.

How did you meet Peter Farrelly (director of Dumb and Dumber)? Who approached whom?
So Peter Farrelly is at this hotel I’m at in New York, and he’s having drinks at the bar, and he’d mentioned to the barman that Walking on the Dream was the “best record of the last five years.” And the bar manager, as he’s serving the beer up, goes, “No way! The singer’s staying here at the hotel!” Peter went to reception and said, “put me through,” and this particular New York hotel was so particular on calling every two minutes to make sure you had enough towels…and I just said to my daughter, “You pick it up,” and she looks over and says, “Dad! You better get this!” When he introduced himself as Peter Farrelly, I thought it was a bit of a hoax by one of my friends, and I just said, “The only Peter Farrelly I know is the famous movie director, he made my favorite movie of all time, Dumb and Dumber,” and he’s like, “That’s Me! That’s Me!” Nick at the time was in Manhattan as well, so the next day we called up the lobby, and it was great. [Farrelly] had a lot of his old friends there from Rhode Island. We talked and it came up about the sequel, and we sort of threw our names into the ring, and he was chuffed that we’d be up for doing it. So we just hit on it when he said we want you guys to do the score and Nick and I just went out and celebrated.

How does one become an Empyrean?
I think you become Empyrean by giving thanks. By understanding that what you have is such a precious gift. Like it says, everyone is wonderfully and carefully made, every person is a masterpiece, and the only reason. You cannot be happy and be selfish. The minute you realize you have the treasure that you are and break off selfishness and give thanks, you become Empyrean inside. And only what’s inside can fall out of you. Then you become Empyrean. All pure.

Empire of the Sun will headline day two (Saturday Oct. 4, 2014) of TBD Fest. For more info and a full lineup and schedule, go to Tbdfest.com. 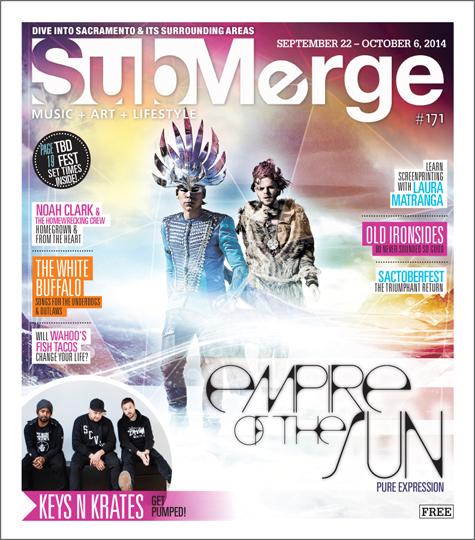