Ex Hex Flex with a Charm that Disarms

Sometime during the last decade or so, rock ‘n’ roll itself started to burst at the seams. Any prevailing trends, whether they be the DIY, slacker attitude of ‘90s alternative; the stripped-down snarl of ‘70s punk; or the angular romanticism of early ‘00s post-punk revival, were blown to the winds of taste, curated according to the preferences of musicians and the whims of listeners. These days, with an industry going all-in on teen-oriented pop and a critical press having its focus pulled in myriad directions from EDM to alternative hip-hop, the torch of the rock genre itself seems to burn somewhere on the fringes.

Nevertheless, rock ‘n’ roll is thriving, and why wouldn’t it be? The fringe is rock’s birthplace. There is less of an urgency now within the genre to latch on to the most current aesthetic; all that matters is crafting a good song, making a solid album and bringing some of that indomitable rock spirit to your audience. Of late, you would be hard-pressed to find a band that better demonstrates this than Ex Hex.

Washington D.C.-based rock veterans Mary Timony, Betsy Wright and Laura Harris have a collected rock experience spanning countless projects (Wild Flag, Autoclave, Childballads, The Fire Tapes), music styles and instrumentation over the years. Last year, the trio joined forces for the first time as Ex Hex. Burning with a desire to play unadulterated, no-frills rock ‘n’ roll with the added irresistibility of pop, the three boiled down the best traits of the genre to a science, rounding out the year with an intensely addictive (and instantly classic) record, the aptly titled Rips, released October 2014. Every track sounds like the summer anthem from an unplaceable, golden year. The pure enthusiasm from this record seems to flash outward like a jet of sparks, leaving the listener with a pleasant buzz long afterward.

So far, the group’s aesthetic policy of abandoning high-concept, soul-baring songcraft in exchange for straight-up instinct and a vital sense of fun has paid off, spinning Ex Hex out on the largest tour of their respective careers and reaping a harvest of ecstatic write-ups from reviewers starved for the rare, exciting guitar record. Recently, they hit TV with a live performance on Late Night with Seth Myers, and later this month, they’ll be breaking through to Sacramento on the West Coast leg of their musical sojourn.

Here, we catch up with bassist Betsy Wright by phone from the band’s unstoppable tour van after an exhausting rapid-fire run up the East Coast. 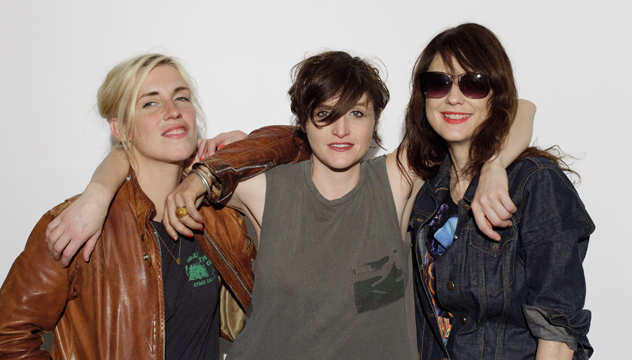 How is the scope of this current touring schedule as opposed to others you’ve been on in the past?
Oh, much longer and more busy, and more grueling. In the past, with other bands, I’d been on much shorter tours, and I’d always worked and had a day job that I had to be back for, and had a little bit more of a normal life, I think. But for now, we’re basically touring all the time. Now, this is my life. Before, the tour would have been like a three- or four-day weekend.

You’ve been involved in several other projects, including Childballads and The Fire Tapes. How have those experiences been versus what you’re doing now with Ex Hex?
We’re having a lot more fun! We’re having more fun with the music, and we’re trying to write music that’s fun to listen to, instead of trying to make music that’s expressive of our feelings. That’s not really what we’re going for; it’s more about the craft of writing a song, arranging a song in a cool way to make it really fun to listen to.

For your image as a wild, rip-roaring, garage-inspired band, there seems to be a real streamlined, disciplined quality to the songs on Rips. How did that go?
Well, we wrote and arranged the songs before we ever went in the studio, and also, we had toured a little bit before we recorded them. We’d worked everything out over a long period of time. By the time we went in the studio, all the parts were arranged, and we had already played all the material live, so that made everything more solidified, I think, rather than creating the songs on the spot.

You personally wrote a couple of the songs on Rips (“How You Got That Girl,” “Radio On”) Any stories behind those?
I think I was just inspired by the sound of the band, the idea of writing something meant to be fun and crafting a tacky, more fun-sounding pop song, so I thought I’d just try it out. I played them for Laura and Mary, and they seemed to think that it’d work if we did them so we did them live, and they seemed to fit with the other songs well.

You’ve crafted a pretty distinctive onstage look. What is your inspiration in this area? Is it an expression of the Ex Hex persona?
I’d say this look is definitely for the Ex Hex persona. We always change before we play, because you’re kind of going into another character, or accessing another part of your own personality. Going on stage and performing, it helps to get you into that area of your brain if you change the way you look.

You have a multi-instrumental background (viola, keyboards, bass, vocals, etc.). Did you have a very musical upbringing?
Yeah! I’ve always played piano since I was a kid, and I started playing the guitar when I went to college. I studied piano and music—jazz, classical. I always liked rock ‘n’ roll, though.

Do you, Mary and Laura all remember your first rock records? The ones that made an impression?
Of course! Probably the first rock ‘n’ roll record I got was a compilation of ‘50s music. It had Buddy Holly, Elvis, and a lot of that kind of stuff on it. Here, you want me to ask them?
[In background] What was your first rock ‘n’ Roll record, Mary?
OK, Mary’s first was The Kinks Greatest Hits.

Sweet!
And Laura. Laura? [Talking in background.]
She says it was probably Aerosmith.

Alright—pretty good cross-section of the stuff rock is made of!
Yeah, we really got our early education!

What’s your take on the term “rock ‘n’ roll?” What does it mean to you? What is the power it has that other genres don’t?
Well, it’s really direct and very raw; it just goes straight into your heart, you know? The way it communicates—it’s so fast. It’s immediate, and it hits really hard. It can affect people in a very direct way. It seems to reach people on a raw level.

Do you have a rock ‘n’ roll spirit animal?
I love Joan Jett. I love her voice and stage presence. For me, Neil Young is another person who is a great singer, songwriter, guitar player and a great performer, and very prolific.

I hear you grew up near Capitol Hill in D.C.? Did the scene in that area influence you at all— the punk scene there?
Well, I was born there, and then my family moved out to the suburbs in Virginia. So, I’m really from the suburbs. For me, like, by the time I was a teenager, that stuff had all already happened. In high school, I was actually super into the Grateful Dead. I was really into bands that had piano, because I could relate to it musically. The other stuff [punk] just seemed like something I couldn’t get into.

So things click when they click.
Yeah, I mean, right now I’m much more into ‘70s punk and stuff. I did miss out on that D.C. scene in its heyday, but it’s still prevalent in the city. And it’s cool, because you can see those people around and talk to them. And that’s why I know Mary; she was around then, going to the punk shows in D.C.

Is the cohesiveness and sense of community in the D.C. scene part of the reason you’ve all stayed?
I think we all feel like D.C. is our home, and we totally identify with the city. And now we’re not there that much anymore; at least we haven’t been lately, because we’ve been on tour so much. It’s absolutely different than being from a place like New York or Los Angeles. People actually move there for the specific purpose of making music. People don’t really move here to do that, they usually come here to be a lawyer or work in politics.

I know that Mary and Laura have known each other the longest—when did you fall in with this gang?
I had met each one of them probably 10, 15 years ago now. Just on various occasions in D.C. If you’re a musician in D.C. at all, eventually you get to know everybody else who’s in the music scene; it’s pretty small, so I definitely knew who they were. When those guys started playing together, I wasn’t living in D.C. at the time. I was just about to move back. Those two [Mary and Laura] were looking for a third player at the same time, heard I was moving back into town, and we just started talking about maybe playing together. I met up and jammed with them, and it seemed to click right away.

You have mentioned that this is the most fun project you’ve ever been involved with. Do you think it shows in your fan base, and the crowds you play to, as opposed to your past projects?
Yeah, definitely. I think that people can feel that. It’s sort of contagious, you know?

What do you see Ex Hex doing after this current round of touring? What kind of direction might it be heading in?
Well, we’re pretty much booked until September, so after that, we’ll probably just start getting together and playing; we’ll just start writing some more awesome guitar riffs, you know? We don’t have a vision change in mind, we just want it to be good. We want it to be killer.