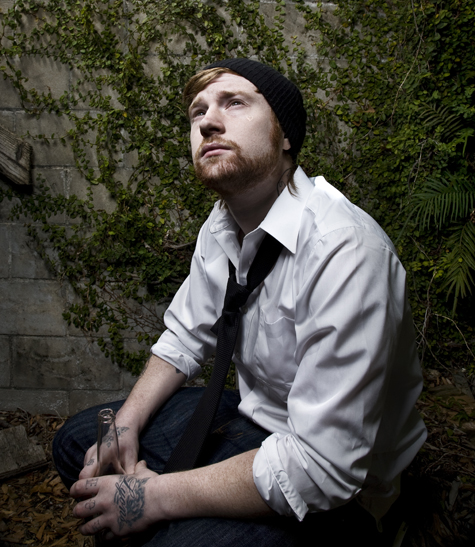 Jonny Craig is front and center on his solo debut

Jonny Craig is a name many of you might be familiar with. The now Lexington, Ky.-based singer is currently frontman for Rise Records’ indie core sextet Emarosa. However, now that he has a bit of down time from his regular gig, he’s decided to start from scratch, so to speak, with a brand new project—his first ever solo album, A Dream Is a Question You Don’t Know How to Answer.

Local music fans may also know Craig for more infamous reasons. He also served as co-vocalist for local groove-heavy screamo heroes Dance Gavin Dance—a group that Craig left on bad terms. In our 2008 interview with the band, Dance Gavin Dance’s then co-vocalist Jon Mess (also no longer in the group) said of Craig, “We just couldn’t get along with him at all. No one in the band liked being around him.”

That was some time ago, however, and both parties have moved on. In fact, Craig and Emarosa even toured with Dance Gavin Dance earlier this year. The “Squash the Beef Tour” just wrapped up last month on Oct. 19 in Omaha, Neb. Craig wasn’t too forthcoming about details but he did say the experience was a positive one.

“It was good,” Craig said through spotty cell phone reception from Dallas, Texas. “We’re all good to hang out again, and that’s about it. It wasn’t awkward.”

Despite the messiness of his break up with Dance Gavin Dance, Craig also said that he wasn’t surprised to tour with them again—albeit as part of a different band.

“Nobody holds grudges in the industry that we have,” he said. “You can’t just hate somebody forever.”

With the past behind him, Craig is on the road now with the equally talented Tides of Man serving as his backing band. These are just his first string of dates as a solo artist; however, Craig and company have gotten off to quite a start. Craig played his first solo show in support of Northern California punk legends AFI.

“It sounded good, but everyone was really nervous because we’d only practiced once,” he confided.

Despite these auspicious beginnings, Craig said he is looking forward to building his new endeavor from the ground up.

“It’s a little harder to do a solo band, because you have to start over, so I’m not going to be drawing 200 or 300 kids like Emarosa or Dance Gavin Dance would, because no one’s going to hear about the show,” Craig said. “But it’s still fun to go back and do shows like you were doing when you first started playing.”

Submerge spoke with Craig before sound check for his Nov. 23 show at The Door in Dallas.

Has having to start over with a new project reignited your passion for the music—having to rebuild a fan base with your own music?
In a way, it kind of sucks trying to go back and build a fan base, but then again, there’s not so much pressure. Like, “Oh, I’ve really got to nail this one, because everyone’s watching.” It kind of gives me a chance to go back and breathe a little bit and not be so worried about everyone’s opinions. Only I’m the one that matters. The backing band, if I mess up, they don’t care. Instead of having six opinions, you only get one. It makes it a lot easier for someone who fronts a band. It’s like, “There’s only one person writing this stuff; it’s you. So just relax, have a good time.” All you have to do is make sure your band is in place, and you go with it.

From what I’ve heard of the album, there seems to be a lot of different styles from song to song. Were you looking to branch out and try different things?
Like I said, we wrote skeletons to the songs, and then I sang over them. I just sang what I heard on the tracks. And then we were like, “This song’s a little funky, let’s put some weird guitar behind it or piano.” That’s how it really got decided. It was just me singing what I heard, and then it went from there. After we had the skeletons and the melodies down, then we did all the real guitar work and all the stuff that made the album—like the fillers.

So it sounds like a lot of it came together in the studio then”¦
Yeah.

Is that a lot different from how you’ve worked with Emarosa and Dance Gavin Dance in the past?
No, man. I just really like to go off the head when I record. I don’t like to over think melodies, over write things. I just like to go in and bust shit out, and think about it on the spot. If I don’t like it, I’ll start all over and find something new. I like to be 100 percent—I wouldn’t say improv—but not so organized. I like to relax and think to myself, “Hey, I want to go in here and do whatever I hear, because I’m going to trust myself. Instead of being like, “Oh, this needs to be catchier,” you know?

Before you mentioned that with this project, you don’t have to consider other opinions, just your own. Did that give you more leeway to explore the kind of stuff you were hoping to, like maybe stuff you weren’t able to do before with your music?
That’s the best thing about it. I didn’t go in writing anything. I didn’t go in expecting it to be, oh, like, “Let’s write an acoustic album,” or, “Let’s write a pop-y hip-hop album.” I just wanted to get in there and see what we could come up with. It was all about whatever came to my head. I hate people who over think everything and are so critical about what they play and how it sounds. I want to have fun singing. I just wanted to make an entire album just like that and show people that it can be done without stressing, and without really having much of a care except that you love music.

I watched the video for “I Still Feel Her, Part III” while getting ready for this interview. Was that a concept you came up with yourself or was it a director’s idea?
That was my idea.

Is it pretty true to the lyrics?
No, it has nothing to do with the lyrics. It’s a private meaning for me, and I’m not going to give it away.

It was pretty racy in the beginning with the two women making out half naked on the bed. Have you caught any flack for that?
No, you know, it’s whatever. Controversy is my middle name.

It doesn’t seem like something you shy away from.
Yeah, you know. I like to have fun. I like to do what I want, and I don’t care what anyone else does”¦ I just think a lot of people put up a front. Obviously, people aren’t as perfect as they portray. Like, they want to be in this band, and they want to be responsible and be role models for kids and stuff. I make music for myself, and I shouldn’t have to hide who I really am, because I make music to keep myself alive. I’m sorry that I might not be the best role model for someone’s child, or I might not be the best person for someone to look up to, but I want to be myself. If people say, “He drinks too much, or he does this or that.” I’m not going to hide who I am just so I can be bigger”¦ It’s just not who I am.

Writing music, I’m sure, you put a lot of yourself into that also”¦
The funny thing is, I never hid behind anything. And if you can’t grasp who I am or what I’m about, then that’s your problem. I guess that video—without giving too much away—is just me being like, this isn’t something I care about, people saying I drink too much or party too much”¦ I’m not going to get into it. It is what it is.

Jonny Craig will played The Boardwalk in Orangevale on Dec. 1, 2009 with Tides of Man and Sleeping With Sirens.