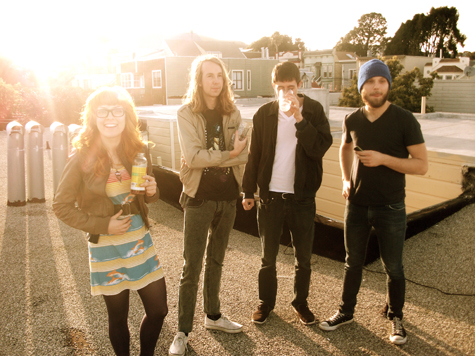 The breakup of Sacramento’s 20,000 was a complicated one. The group had an electro-Sonny and Cher thing going on, until it imploded at a fateful summer night’s show. David Mohr, one half of 20,000, was Cher in this scenario, in that it led to songs in the vein of “Bang Bang (My Baby Shot Me Down).” Assuming the moniker of Favors, Mohr’s series of fractured digital EPs sought comfort in the familiar synthesizer framework, a kinship with Lou Reed’s “Hangin’ Round” chorus and anti-anthems that put weekends and summers in their crosshairs.

With the heart pain now out of his system, Mohr is exploring the futuristic vision his friends have always associated with the bedroom project before he was able to see it. “I started writing these songs when I was living with the rest of the band, so that isÂ over a year’s worth of songs that I picked from to form this album,” Mohr said. “So in that time,Â I basically started feeling like there were a lot of different subjects I hadn’t approached yet with Favors, and I wanted to open it up so that the future of the band could go in any direction.”

The band he lived with was once called Impotent Ninja, which consisted of Ben Lewis, Chris Metcalf and Crystal McCarthy. The house mates have since gone their separate ways, but their time together allowed Mohr to get in a better place that led to the completion of Five Million Years, a record which is somewhere between sugary synth-pop and music that can help break a healthy sweat. “The songs I write will always have a pop element to them, I think,” he said. “Unless I become so involved in it that I lose focus of what it means to be pop. But I don’t know. I like fun songs. I like dance music and I like electronic music. My friend’s little sister said that Favors sounded like ‘workout music’ when she heard it. That’s perfect.”

When I last talked with you, Favors was a bedroom project of EP releases with a lot of post-breakup songs. Listening to the new record, it seems as though Favors is exploring abstract territory, with songs of starships, cash-machines and caves. What brought this change in songwriting?
A friend of mine said that Favors sounded “futuristic” to him, and I thought that was funny. I had never thought of it like that, so I thought I would push the science fiction element in some of the songs. I was hesitant to do that at first, because I didn’t want the songs to feel too distant or detached from reality, but I kept reminding myself that David Bowie wrote tons of futuristic space ageÂ songs, but it took me years of listening to ever realize that. They always just sounded like awesome songs from the ‘70s. Maybe I don’t pay attention to lyrics.

Now that you mention Bowie, I feel like the album title Five Million Years is just an extension of Bowie’s “Five Years.”
The album title Five Million Years comes fromÂ my desire to create a larger time frame and a more expansive imaginary space for the listener to step into.Â I’m interested in the way that time can be distorted by music, like how fast songs can make the listener feelÂ as ifÂ time is moving quicker. It’s strange; music is very connected to our concept of time.

Favors is a full band now, but what’s the recording process like? Is it done as a band or do your band mates learn the songs after you’ve created them?
In terms of songwriting and recording, Favors is still a bedroom project. I write and record the songs on a laptop at home.Â The live band was formed at the very beginning; it was always Chris, Ben and Crystal, but it just took some time to get things going with that part of the project. Usually I’m working onÂ music alone, but I always wanted the live band to exist as well. It’s nice to have a group to share it with, and it makes practicing and playing live way more fun. During practice of course, everybody contributes their own touches, and of course Ben is a wizard on guitar, so we have to incorporate that. Everyone is amazing at their instruments and is way beyond me in musical ability. I’m very lucky to have friends who want to play the songs.

You don’t see many indie bands with a frontman. Was it weird at first to have no instrument responsibilities on stage?
I’m really not a very good musician, so playing keyboard on stage is difficult for me. I thought it would be best if I just focused on the singing, that way I can express something that the music isn’t expressing live. I still feel uncomfortable performing live, though; it definitely feels like the fakest part of the whole thing for me. But that doesn’t mean I’m not trying to do my best.

From what I’ve seen, you’ve taken to the art of being a frontman. Were there any famous lead singers you took cues from?
David Byrne became a huge inspiration early on. He added so much to the music justÂ with hisÂ movements and appearance on stage. Of course he was a great guitar player and a great musician, but I was most intrigued by his gestures. It seemed like he was really thinking on stage, and channeling that into the songs.

Have you gone for the cord windmill and catch the mic maneuver yet?
I used to do the windmill cord spin in my first band. I was really good at it, but I had to duct tape the mic to the cord so it wouldn’t fly off. I’m too old for that now. My favorite part about live shows is when things start going wrong, though. It’s fun to try and make the best of it and keep the show going. During our last show, Crystal’s electronic drum set kept falling apart because I had broken it in half while loading gear on stage. Chris had taped it together before we started, but I had to keep lifting it up for Crystal while she played. I love those moments. Things start falling apart so quickly that trying to fix them becomesÂ ridiculous.

The cassette culture is on the rise, but has not quite hit Sacramento yet. Why did you choose this format?
I’ve alwaysÂ wanted Favors music toÂ be available for free. I think that anyone who wants it should be able to have it. Also, I don’t know too many people who pay for music anymore, and I especially don’t know very many people who buy CDs, so I thought I might as well do a cassette.

It’s still nice to hold something in your hands that represents the music. I think the same reasoning goes into vinyl production, but personally I have more of a nostalgic connection to tapes. The first music I owned was They Might Be Giants’ Flood on a cassette that I bought from my brother. I listened to records as a kid, but I had a more personal connection to tapes. I used to make cover art for cassette tapes of made-up bandsÂ years before I ever started writing music. Despite all the nostalgia and my love of cassettes, there is also something funny about releasing tapes now in 2011. I like the fact that I recorded the music on a computer but I’m putting it out in a medium that degrades the quality and its near obsoleteness. It’s a wink backwards.

The bonuses are that it is really cheap to do and they look cool. I had fun designing them and putting them all together. It’s also funny to see people’s reactions. At least one member of Favors thinks releasing a cassetteÂ is a terrible idea.

Terrible idea or not, Favors’ new album Five Million Years will be available on cassette around Aug. 1. You can order a copy and get a free full digital download at Favors.bandcamp.com. Check out the band live to celebrate the release of the album at The Press Club in Sacramento with Evan Bailey and The Happy Medium on Aug. 4.