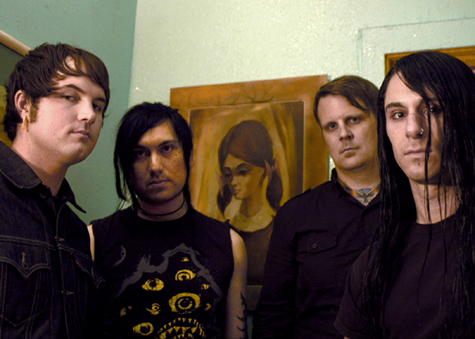 What else to do in the face of a zombie apocalypse besides dance your ass off? Sure, you could hunker down in a fortified location with some canned food and a shotgun, but you’re really just delaying the inevitable—that is, if the movies hold true. You might as well just have a good time before you’re eviscerated by a ravenous horde of undead. That would seem to be the thesis posed by Death Valley High’s latest effort, Doom, in Full Bloom. The San Francisco-based “doom pop” group may be heavy on the doom, but they ditch the gloom in favor of dance-worthy beats and savage pop-rock hooks.

Death Valley High began as the brain child of producer Eric Stenman and long-time rock musician Reyka Osburn, whose talents have graced two notable bands in the past: Tinfed and Ghostride. Death Valley High was born out of Osburn’s confusion over where his other projects were headed at the time.

“I didn’t know where Ghostride was going,” Osburn says. “I had a body of songs that weren’t Tinfed, they just didn’t feel like Tinfed anymore”¦ Everybody was assuming that I was going to move into this Queens of the Stone Age kind of area. It was tempting to go that type of route. When I realized I didn’t want to go desert rock, I shifted everything to the death side. I wanted everything to be black and white, and horror movie style.”

Death Valley High was the result. The band’s first album, 2007’s The Similarities of the Loveless and the Undead, featured Stenman writing and performing bass lines and working behind the board as producer. Other than that, however, the album was the sole work of Osburn, who says he wrote the songs “from the drums up.” It’s not that Osburn is a typical control freak. In fact, as a member of Ghostride, he had very little input in the songwriting.

“Basically, I was just the singer in that band. I didn’t do anything,” he says. And it was a role he really enjoyed.

“I love the challenge, because you have to integrate more with the music and someone else, as opposed to when I pick up a keyboard and start to write something, I’m already thinking what the vocals are going to do,” he goes on to say. “I already have an advantage. I already know if something is going to stick or if I’m going to like it, because I’ve already started to put those things together. With Ghostride, I don’t have much of a say, so I have to fit myself in the cracks, and I love it.”

Doom, in Full Bloom also showcases Osburn’s willingness to share creative duties. He says that the songwriting process for the band’s most recent album—released Nov. 3 on iTunes—was much more “integrated” than Death Valley High’s debut effort, a development he hopes will continue to evolve.

However, the extra hands on deck didn’t help the process move any more quickly. Osburn admits that Doom, in Full Bloom has been done for about a year. He says that breaking in a new bass player, Huffy Hafera; using two mixers, Stenmen and Alex Newport; and being on tour in Europe with Will Haven when the album was sent off to be mixed were all contributing factors in the delay.

“I thought I was going to pull my hair out at that point,” Osburn says. “It was like, it was time to move on to the next chapter, but we’re stuck on these last few pages.”
The delays caused Osburn to change the title from The Endless, which turned out to be sort of prophetic, to the current Death, in Full Bloom, taken from a tagline that was posted on the Death Valley High Twitter page.

In the following interview, Osburn tells Submerge about the new album, his work as a DJ and his recent preoccupation with Rick Springfield.

On the Death Valley High Twitter page, there was a recent post that said you were warming up for your show at Annie’s Social Club by singing some karaoke. Is that how you normally prepare for a show?
[Laughs] You know, I wish there was a karaoke machine backstage, not just because it would be fun, but it would be helpful in a way. You get so used to singing your own songs, you know, and doing your own warm-ups.

Do you have a go-to karaoke song?
I can do a mean Rick Springfield. I’d spotted it in there, and I had Rick Springfield on my mind for some reason—like maybe thinking back to my childhood or something—so I pulled out a little “Jessie’s Girl.”

I’m thinking I might have to put it on my play list tomorrow night. I’m doing a rock and punk DJ set tomorrow night, and it’s four hours, so I’m pulling out everything. But I don’t want to be, like, Mr. Jukebox. I want it to be a little more fluid. But “Jessie’s Girl” has got to be in there somewhere.

Do you draw parallels between playing your own music and working as a DJ?
When I got into the DJ culture, I always thought that people didn’t put enough into it. Playing a show, you’re going crazy, you’re moving around, and I always tend to look at those as my favorite shows—when the band is going crazy”¦

It’s all performance, and I just try to be there with it. It’s almost the same thing when you’re playing a show, and you’re not all the way there in it”¦ I don’t know if you’ve seen a lot of hardcore bands, but the singer will all of a sudden start pacing before the show starts, trying to get that momentum. One DJ told me when I was first starting out, “Play your very favorite, newest song first, and just let the rest happen.” A lot of DJs are like, “I don’t want to drop my favorite track in the beginning,” but at the same time, whatever warms you up and gets you there, and gets the crowd ready for what you’re going to do, I think is very much the same.

Death Valley High has been called “doom pop,” and “doom” is in the title of the latest album, but it’s not really gloomy music because of the dance element. Is that a dichotomy you enjoy toying around with?
You’d probably find a lot of my favorite dance music tends to be a little somber. Right now we’re covering a Kid Cudi song, “Day ‘N’ Night,” and that’s a morose little ditty. It’s a lonely guy who starts to come alive at night. I find myself more attracted to that kind of thing; even though there is a thread of that, there’s still this upbeat vibe.

The thing about it is—Doom in Full Bloom—a lot of that doomsday thing, 2012, a lot of that started to develop right around when I was writing the record, so it just made sense. There’s not that many bands doing the dance-punk thing that had that kind of slowness interspersed in the music. I’m a really big fan of Godflesh, so I’m into that heavy, slow stuff that breaks into these weird disjointed beats. I used to be a drummer years and years ago, and that’s why I started DJing, because of drumbeats. I was really into drum ‘n’ bass and jungle”¦ Just growing up in that ’90s time when that doom metal was crossing over with industrial, I think that stuck with me a bit.

So DJing has really informed your songwriting up to this point?
Totally. There will be times when I’m wasted, and I’ve broken away from my pals, and I’m just being a spectator, watching everything happen; or I’m just listening to the music and becoming isolated, and a lot of times, I’ll start to drift. I’ll start getting ideas for lyrics or a guitar riff or whatever. It has influenced me pretty heavily. I’ve been DJing for 10 years or something like that, and I think I’m starting to get good at it right about now [laughs].

Before, we talked about how the hubbub over 2012 was in the media when you started writing the record, did that make a big impact on you when you were writing Doom, in Full Bloom?
This album, I felt like I was envisioning 28 Days Later—a zombie apocalypse sort of thing. I’ve read many places that experts, scholars, scientists or whatever, claim that if there were some sort of zombie outbreak, that would be the end of civilization as we know it. If there was a plague or a chemical plant that grew up and it changed us or whatever. I’m a horror fan, and the whole Death Valley High approach was that I wanted it to be in the horror genre thing without it being the typical rockabilly or psychobilly, or a Misfits punk rock. I still wanted to do what would be considered kind of different and risky, but still have that element”¦

If you read into the lyrics, they become about some sort of scenario that’s not real life, but it was important to me to describe daily life survivalism. Like watching a horror movie, it’s like, “Wow, that’s what they had to do to survive?” That’s like every day. I live in San Francisco, and that can be scary. Everything can be scary. I wanted to touch on themes that were human and natural, but give them my own twist.