From the Ashes Rises A Vulture

Pullout Picks Up Where Monster Squad Leaves Off

All good things must come to an end—or in this case, a pause. Though the members of Monster Squad—the venerable Vacaville-based hardcore band—haven’t called it quits, the group did decide to take an indefinite hiatus in 2007 after roughly 11 years of causing a ruckus.

“Some of the guys wanted to take a break and didn’t want to go on tour anymore,” says Pullout vocalist Chris, who played guitar and sang as a member of Monster Squad. “Those of us who wanted to keep doing it formed Pullout and kept going.”

“I was in another band called Rosevere, which had some guys from a band called Dcoi, but two of the guys in that band couldn’t tour, so we were going to call it quits with that band anyways, because we really wanted to tour,” adds Jason, Pullout’s drummer. “We were looking for a singer, and since Chris was already a good friend, and we knew we’d get along with him on the road, we decided to try him out. That’s how we started doing this.”

Pullout is set to release its long-anticipated (especially as far as the band is concerned) debut LP, Eagles and Vultures, on Sacramento’s The Downtown Academy label. The album will be released on June 5, almost a year to the date after it was recorded, Jason says. According to Jason, the road to getting the album in their hands, and in the hands of area punk fans, has been fraught with peril.

“We were trying to find a label, and that takes time,” Jason says. We had a label in Europe pretty much instantly, but finding an American label was pretty rough.”

Pullout was close to a label deal, but that fell through. Luckily for the band, some people from that label (neither Chris nor Jason would mention the name) moved on to The Downtown Academy, where Pullout eventually found its American home. But, even with a label deal, problems persisted.

“It seems like everything that could go wrong at a printing house or a pressing plant went wrong when sending this album out—from the art and the graphics being in the wrong areas for their format, or the masters not reading on their program,” Jason laments. “It was nuts.”

Production woes aside, Jason says the band never got frustrated.

“We knew it would get out eventually. We weren’t frustrated, just more anxious to get it out and get the finished product.”

Strangely enough, though Eagles and Vultures may have taken a year to be released, the album was recorded in a much more expedient fashion.

“We actually did it in three days,” Jason says. “We went back and did one day of touching up some small stuff in, like, half a day. But other than that, we banged it out in three days. We stayed there, got up in the morning, recorded all day, and then woke up and did it again the next day.”

Perhaps an album as aggressive as Eagles and Vultures could only have been created in such a fashion. Its hardcore-informed hooks are as slick as they are sharp, creating a multi-faceted punk rock assault. Chris says that Pullout’s collaborative songwriting process has contributed to the band’s variable sound.

“Basically, everyone in the band is a guitar player and writes songs,” Chris says. “Usually, one person will come up with an idea, or write the whole song, and the rest of us will throw our ideas in. I write the lyrics to all the songs, and on the music we collaborate together.”

He goes on to say that having so many songwriters in the group does not create a too-many-cooks scenario.

Though the band is collaborative musically, Chris is mainly responsible for lyrics. He says a lot of the songs on Eagles and Vultures play upon the dichotomy of positivity versus negativity in various aspects of life.

“A lot of the songs are about losing your friends to drugs and political and social issues and then personal battles,” Chris explains. “I think the eagle and the vulture is a perfect representation of the whole thing.”

The title track is political in nature. “Eagles and Vultures” is an exploration of Chris’s feelings toward President Bush leaving office.

“I was going through a phase when Bush was leaving office, and I was reading a lot about the war and Blackwater and all these privatizing the military kinds of things,” Chris says. “Basically, it was just a look at the U.S., and how we say one thing but do another. We’re this great power, but at the same time, we always have this other angle. It’s stuff like that: governments being two-faced and presenting what they’re doing, but doing something else in order to get ahead.”
Chris says that he was happy about the election of Barack Obama as president, and is supportive of his administration thus far. However, he doesn’t believe his positive feeling toward the current state of the U.S. government will have a negative effect on his songwriting.

With Monster Squad on the shelf, expect to hear plenty from Pullout in the interim. With an album just a few weeks away from release, Chris and Justin report that they have seven songs already written and are in pre-production for a new album that they hope to have released next year. 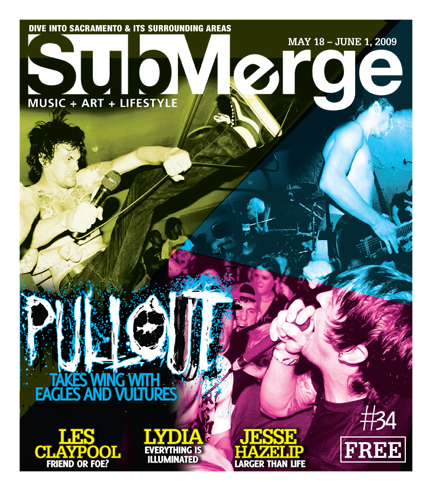