From the battle scene to the studio, local beatsmith Dibia$e 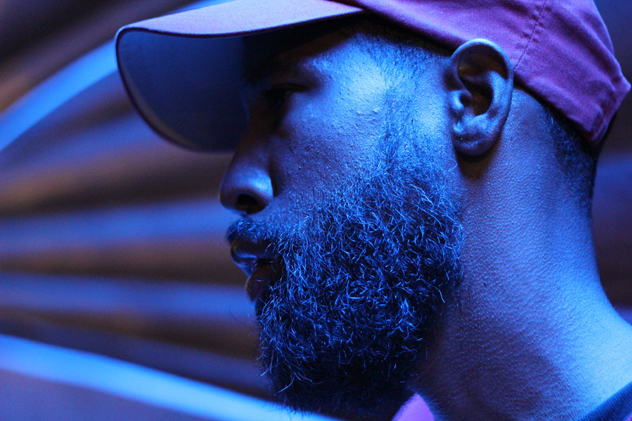 There is little escape from the sun at 3rd and Adeline in Oakland. The industrial district is flooded with bodies sweating through T-shirts and bucket hats designed with variations of the three-eyed smiley face symbol of local rap legends Hieroglyphics. The crew is celebrating its fourth annual Hiero Day and among the invitees to perform is Sacramento’s Dibia$e. It seems as though a combination of the heat and the liberal weed smoking reduces crowd participation to a steady head nod that ripples to the signature bounce of Dibia$e’s production.

Although other producers will grace the stage with the same gear at Hiero Day, none manipulate the SP-404 like Dibia$e. His production is glitchy with hints of chiptune and 8-bit, at other times soulful samples finessed with a slice that’s both Dilla-esque and entirely a style all his own.

On this afternoon in Oakland the hundreds gathered don’t move much, but they also don’t leave. Break dancers accompany Dibia$e on stage, stepping to his music and interpreting the rhythms with their moves. It’s almost as though he’s got the remote control over their movement. We are high and in awe. He’s a veteran as much as headliners like Aceyalone and Tha Alkaholiks, but he’s also remained a low-key legend that’s been present at every significant scene in Los Angeles and makes no qualms about his quiet life in Sacramento.

Days prior to Hiero Day, I met Dibia$e at Sol Collective south of Broadway in Sacramento. He was there to record a session with a local artist, but the person had bailed last minute. As we were sitting in a side room tracking the timeline of his career, he said he liked Sol Collective because it reminds him of Good Life Café in Leimert Park, Los Angeles. In the ‘90s, Good Life, a raw food restaurant by day and the rawest open mic by night, was the event for independent rappers in Leimert Park. At Good Life, if you didn’t meet their standards, attendees shouted “pass the mic,” forcing you out of contention until next week. It was in competition at Good Life, later called Project Blowed, that he first earned his stripes as a rapper and later as a producer in beat battles. Dibia$e said once he got behind the sampler to make beats, it became his MO because his friends were always in need of them, and, from winning the battles, he got his first experience paying rent off rap music.

“It was stressful because I had to win like a prizefighter,” he said. “I was the Kimbo Slice on beats.”

From the early 2000s until 2007, Dibia$e was notorious in the California beat battle circuit. His competition at Project Blowed was against burgeoning artists like Nosaj Thing and TOKiMONSTA that prepared him for greater West Coast scene. When he wasn’t competing, he met with L.A. producers like Flying Lotus, Ras G, Kutmah and Exile at a beat workshop called Sketchbook at The Room in Hollywood—a precursor to the now-legendary Low End Theory at the Airliner. In those days, he’d take Greyhound buses to the Bay Area and drive to San Diego for battles. Venues like The Knitting Factory L.A. hosted Beat Society and the Red Bull Big Tune Beat Battles. He would even travel to the Inland Empire for battles in Riverside.

“Even when I’d go to watch, people would come up to me nervous to find out if I was entering,” he said.

He was making do from battling, but concurrently, the admiration for beat music was no longer exclusive to the small producer community. Sketchbook was conceived as a workshop to sit around a boombox and trade beat tapes like baseball cards. Low End Theory was a social event where people went to be scene and photographed; and where musicians like Erykah Badu, Thom Yorke, and Prince came to DJ secret sets. As Low End Theory took off and an arena for beatmakers outside the battle circuit became a reality, his associates from Sketchbook thought he should think big picture.

“A lot of cats used to tell me to leave the battles alone and start doing the shows,” he said. “But I felt like the battling was my market. It got me traveling. I rode that wave for a little bit. I didn’t win every single one. I’d drive far and lose battles. Lose in the finals after going four extra rounds and just miss it. Out $500 after getting that close. That’s rent money.”

In 2010 he was still competing in battles, winning the Los Angeles Big Tune event but falling short in the finals in Chicago, but that big picture was also coming into focus. He released his first solo album, Machines Hate Me, on L.A.-label Alpha Pup, run by Low End Theory mastermind Daddy Kev. That year was also when Dibia$e uprooted from L.A. to close the distance on a relationship with a woman from Sacramento. The move paid dividends. She’s now his booking agent, business partner with their label 10 Thirty Records, wife and mother of his newborn daughter.

While Sacramento did not offer the scene support he enjoyed in L.A., he expressed no regrets in his current status. His fatherhood role, which includes a stepson, structures his time spent making music. As a young producer, he would hole up in a friend’s studio and work in a weekend flurry. Now his lab time in a studio built in the backyard is reduced to a few hours during his daughter’s afternoon nap, the baby monitor at his side by the sampler.

“I can’t squander the day away,” he said. “I’ll play with her and stimulate her brain for a little bit. Sometimes she’ll sit in the lab with me, and I’ll play her some music. Put her to sleep. She sleeps for two hours. I knock some beats out a little bit. I’ll hear her on the monitor. She’s waking up and I’ll feed her again.”

To his stepson and the 6th grade hoop dreamers of California Youth Basketball League in Natomas, he’s Coach Dibia$e. He’s been a youth coach and participated in community volunteer work since his L.A. days and while he only played a year in high school, basketball was a passion growing up in Watts. He said he would play “sunup to sundown” on the public courts growing up. As Coach Dibia$e, his team struggled but competed admirably enough in the first season to maintain his position on the bench.

“I wasn’t going to do it again, but most of the kids requested me to come back,” he said. “They saw the improvement. The last four games we were close to winning all of them [let’s out a big sigh] … but didn’t. That’s that stress part I didn’t miss. But seeing those kids having fun makes it rewarding.”

He admits Sacramento is conducive to creative productivity in its lack of distractions. It shows in his output of three albums (Sound Palace, Looney Goons and Schematiks) in four years as well as several smaller Bandcamp releases. Here he’s lesser known, but his connections to Low End Theory continue to yield opportunities like shows in Australia and Japan. “The time flies,” he said. “It’s only felt like a few months, but it’s going on five years.”

On the horizon is his set at TBD Fest on Friday, Sept. 18, 2015, and more projects with greater ambition, still thinking big picture.

“I’m planning to work with more rappers this year,” he said of his plans for the future, one of which includes aspirations for a project with Detroit rapper and Stones Throw artist Guilty Simpson. Locally he’s got work completed with Chuuwee, Rufio, Wise Child and Tel Cairo.

Still, when he graces that stage, the heart of his life’s work is at his fingertips. The SP-404 is designed to be portable, weighing only 2 pounds, 14 ounces, and he carries his in a shoebox decorated with stickers of the labels who have released his records. His appreciation for the life he leads is in those details on that shoebox. During his Hiero Day set he remixes Souls of Mischief, while sporting a red T-shirt that reads “‘93 Til.” Only days prior he expressed his decades of admiration for the Hiero crew dating back to his drawing days, and that being on that stage was a bucket list item.

“Going back to my junior high days I used to draw cartoon characters of like Hieroglyphics and Souls of Mischief, all them cats,” he said. “That’s the homies and shit now … if they would have told me I would be kicking it with some of these cats in ‘93, I’d have been like yeah right.” 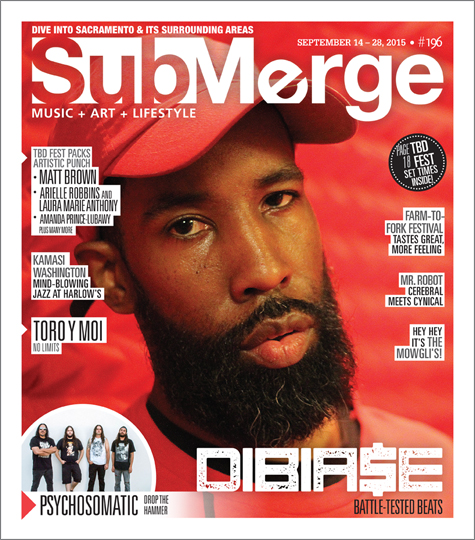 Dibia$e is a must-see artist gracing the stage at this year’s TBD Fest, which will be held in the Bridge District in West Sacramento. For more tickets and lineup info, go to Tbdfest.com. Dibia$e will perform on the opening day of the three-day festival, Sept. 18, 2015.