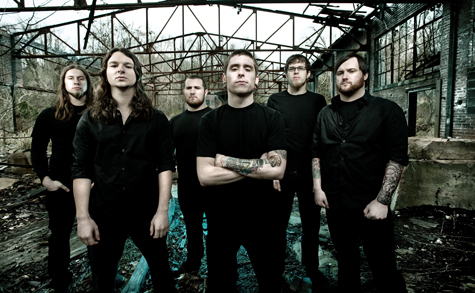 Whitechapel is a metal band on the rise

It was an unseasonably warm February evening in the Northeast as Knoxville, Tenn. deathcore goliath Whitechapel prepared for its show at The Starland Ballroom in New Jersey. For his part, Whitechapel guitarist Alex Wade was preparing to slay the Garden State’s metal faithful in his usual manner. No, not bathing in the blood of virgins or devouring souls of the innocent–though considering Whitechapel’s aural assault, you wouldn’t be completely off base for thinking so–instead, Wade was taking a page out of the Zombieland survival handbook and limbering up.

“I definitely like to stretch,” Wade says. “I’m not that old. I’m 24, but not only is it a good habit to get into, but it definitely saves my body for when I get older. I like to stretch, warm up, get the blood pumping, because you can’t just go up on stage and just start going crazy and head banging and running all over the place. It puts a hard toll on your body.”

For Wade, the type of music he plays necessitates his desire to keep in sound physical condition.

“If you’re a band like Muse or something like that, you can stand up there and chill while the lights move around and stuff like that,” he explains. “When you play loud and aggressive music, you have to put on a stage performance that portrays the music as well, so you’ve got to be moving around and jumping all over the place and fucking cussing and spitting and all that crazy shit.”

It’s clear that Wade has a good head on his shoulders; he certainly needs it, considering Whitechapel’s fast rise through the metal ranks. Having just formed in 2006, the band already has three albums under its belt, each one more successful than its predecessor. A couple years after its inception, Whitechapel was already drawing a bidding war from interested labels and soon landed with venerable Metal Blade Records, which has been home to Slayer, King Diamond and Cannibal Corpse (and, strangely enough, Goo Goo Dolls).

Whitechapel’s most recent album, A New Era of Corruption, was released in June 2010 and has propelled the band to its greatest heights to date. As a result, the band finds itself headlining a juggernaut-sized tour (The Welcome to Hell Tour) that includes some of the modern American metal scene’s most intriguing and brutal bands, such as The Acacia Strain, Veil of Maya, Chelsea Grin and I Declare War. Wade says Whitechapel is excited to front a group of such heavy hitting bands, singling out The Acacia Strain as a group that really gets him and his band mates amped up to play.

“There’s something about that band that people just turn into animals and rip each other apart,” Wade says. “It definitely makes us want to up the ante and make our show that much better, because they’re putting on amazing shows as well.”

Wade took the time to speak with Submerge just about an hour before doors opened at the Starland. In the following interview, we discussed the stratification of metal genres and the band’s Sacramento ties as well as staying on top of the business of being a band on the rise.

Your most recent album, which came out last year, charted pretty high…
Yeah, we broke into the top 50 of the Billboard 200.

That’s high for a pop band, let alone a metal band.
Yeah, exactly. It’s crazy that you see bands like us breaking into the Top 50 in Billboard. Probably five years ago, bands that heavy weren’t getting into those slots unless you were like Slipknot or something, but obviously they’re on a whole other level.

Why do you think that is? Do you see a shift in fans in general or just the climate toward heavy music?
I don’t know man. The music business, and what’s cool and what’s not, all kinds of genres are fading in and out. This whole deathcore thing or whatever you want to call it has been getting big for the past three years or so, and just recently this dubstep thing has been getting really big. People have been going crazy over it, but to me, isn’t that just techno? That’s been around forever. Why is it just now getting big? I guess a lot of people feel the same way about metal. Metal has been around forever. Why is it just now getting big? I can’t really answer that question, but we’re glad it is, because our shows and CD sales are obviously reflecting it.

You mentioned the deathcore genre, and I think more than any other kind of music, metal is broken down to such specific subgenres…
Totally. There’s a difference between black metal and blackened death metal. Like, black metal is Emperor and blackened death metal is Behemoth. If you know metal, you know the difference. Obviously, Behemoth has more death metal influence. It’s heavier and not as shrill as true black metal, but it’s really funny how metal has its mini subgenres, and no other kind of music has that.

Your band’s lineup has three guitar players. When you get into the studio, how does it work out with you guys? Do you all trade off a lot of riffs when you get ready to write?
All three of us collaboratively write for the album. I’ll give credit where credit is due: Ben [Savage], our lead guitar player, definitely writes the most. We all have different things going on. I manage bands on the side and work for the company that manages us. I work for them managing smaller bands. I manage I Declare War, who are on the tour with us. Ben puts in the most effort and writes the most stuff, but Zach [Householder] and I do contribute. I would definitely say it’s a collaborative effort, though. It’s not just one or two people.

How did you get into managing bands?
I’ve always been kind of like the brains behind Whitechapel. Everybody says there’s a brains and a brawn to everything, and I would say I’m the brains. I managed Whitechapel up until the time when we decided, like, “Hey, this is getting to a level where I can’t really do much for us anymore. We need to hire somebody who’s going to take us to the next level.” I’ve always had my hand in developing bands and stuff like that. Our manager, Shawn Carrano, who works with Artery Foundation, which is located in Sacramento, I’ve always expressed to him that I like the music business. I like watching bands develop and grow. He was like, “I think you’d be a good manager. You did a good job with Whitechapel before I took over. Would you be interested in taking on some of our smaller bands? I’ll still help you with stuff, but you can handle the bulk of the material.” I knew I Declare War, because we’d met them on tour, and I knew they were looking for a record deal. Artery Recordings had just started, and I showed I Declare War to them and they were like, “Ask them if they want to be signed,” so we got them signed. I kind of took over the band, and it’s been great ever since.

Since you mentioned your Sacramento connection through Artery, I saw that Chino Moreno from Deftones had a guest appearance on A New Era of Corruption. Did you hook up with him through Artery?
Yeah, Shawn had been friends with Deftones and Chino for like 10 years or something like that. Our manager used to manage Chino’s side project Team Sleep. He’s gotten Chino guest appearances on the Norma Jean record and the one on the Dance Gavin Dance record. He’s always helped Chino out with that–getting guest appearances with young, hot bands. It helps out the band to have a big name on the record, and maybe it will help out Chino because it shows him to a younger crowd who hasn’t grown up listening to Deftones like I have. He hit up Chino and said, “My biggest band is heading into the studio to record. They’re all Deftones fans and they have this part on one song that they’d love for you to do.” He checked it out and liked it a lot and decided to do it, and that’s about it.

So you had Chino in mind from the beginning?
Yeah, totally. It was a riff that I had written, and I’m a huge Deftones fan. It definitely has a huge Deftones vibe to it. Stephen Carpenter is one of my main influences playing guitar. I was like, “Dude, if Shawn can hook up Chino as guest on that riff, it would be so sick.” And it actually came together, so I was really stoked on that.

I read a quote from Phil Bozeman [vocals] where he mentioned that you guys were trying to have more of a verse-chorus structure on your latest album. Was that something you’d all gotten together to discuss?
Oh totally, that was the whole point of A New Era… When it’s just riffing the whole time–when it’s just riff, riff, riff, riff, riff–there’s nothing that people can catch on to. There’s no hooks. There’s nothing catchy about it. But when you try to implement verses and choruses–you know, we’re not trying to be radio rock, where we have three parts to one song and just repeat them over and over again–but when you bring parts back that definitely gives the fans something to latch on to.

Before you mentioned you were amazed to be a part of a band that has reached this level of success, and it happened for you pretty fast. Within a couple of years after you formed, you were signed to Metal Blade, which is a really well established metal label. Have you had a chance to take stock of the whole situation?
It’s one of those things that the band has progressed so fast. If you’re outside of the band, it looks fast, but if you’re inside the band, it feels like it’s been forever. The life of a musician is repetitive. People have been like, “Things have changed so much for you in the past four years,” and I’m like, “Really?” Aside from the fact that we get paid more and we do bigger tours, it doesn’t feel all that much different from when we first started touring.