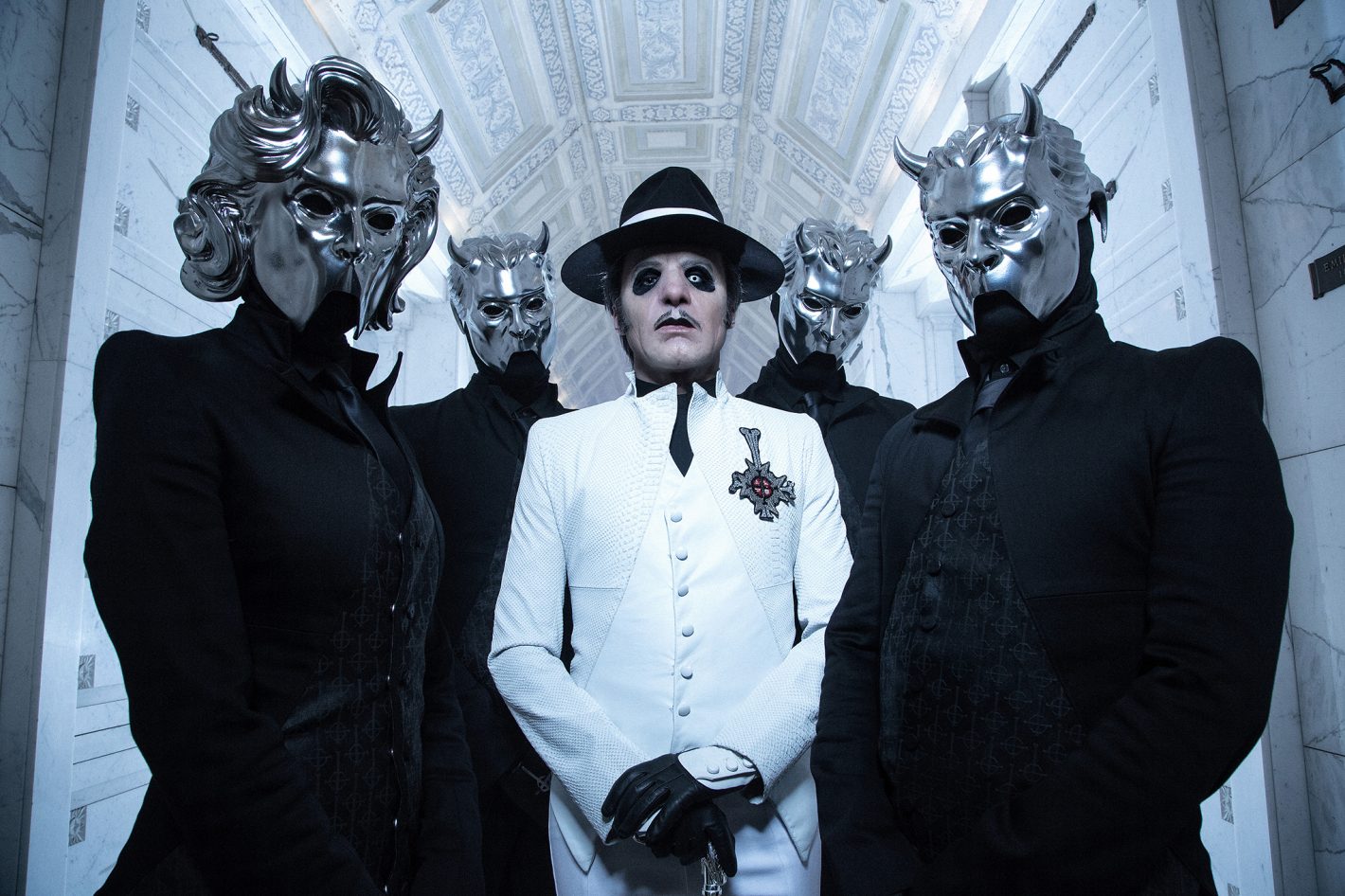 When I was a fourth grader, a friend of mine got me hooked on Iron Maiden’s Live After Death. Sure, there was a zombie looking dude on the cover that kind of creeped me out, I figured it was harmless fun. A cousin of mine found out I was listening to heavy metal and freaked out on me. She told me it was the devil’s music and I was going to go to hell or something for listening to it. I don’t really remember the whole thing because I was, like, 10 and it was the ‘80s, and she freaked me the fuck out. Turns out that traumatized me more than any Maiden song ever did. I thought about this while I was coming up with questions for the following interview with Tobias Forge, frontman for Swedish metal band Ghost, who has tapped into that whole satanic panic thing and ran with it. Heck, it’s even earned him a Grammy.

Ghost released its debut album (Opus Eponymous) in 2010, but no one even knew who was in the group—at least officially—until 2017. Forge, Ghost’s sole songwriter, had his identity revealed when former bandmates filed a lawsuit against him. The ex-band members claimed they were owed profits because Ghost was a collaboration, whereas Forge saw the band as a solo project with a rotating cast of players. After our interview, on Oct. 17, a Swedish court dismissed the lawsuit, ordering the ex-band members to pay Forge’s legal fees, according to Blabbermouth.net.

Prior to his legal battle, Forge was known as Papa Emeritus I, II and III, the skull-faced anti-popes who front Ghost’s band of Nameless Ghouls. For the band’s latest album, Prequelle, which was released April 2018, Forge has taken on the mantle of Cardinal Copia, who looks sort of like a demonic Tony Clifton. The album is loosely based on the Black Plague, which ravaged Europe during the mid-14th Century. The lead single from the album, “Rats,” is a driving, arena-sized rocker. Its corresponding music video is as whimsically choreographed as it is gory. These things may seem contradictory, but Forge probably wouldn’t have it any other way. 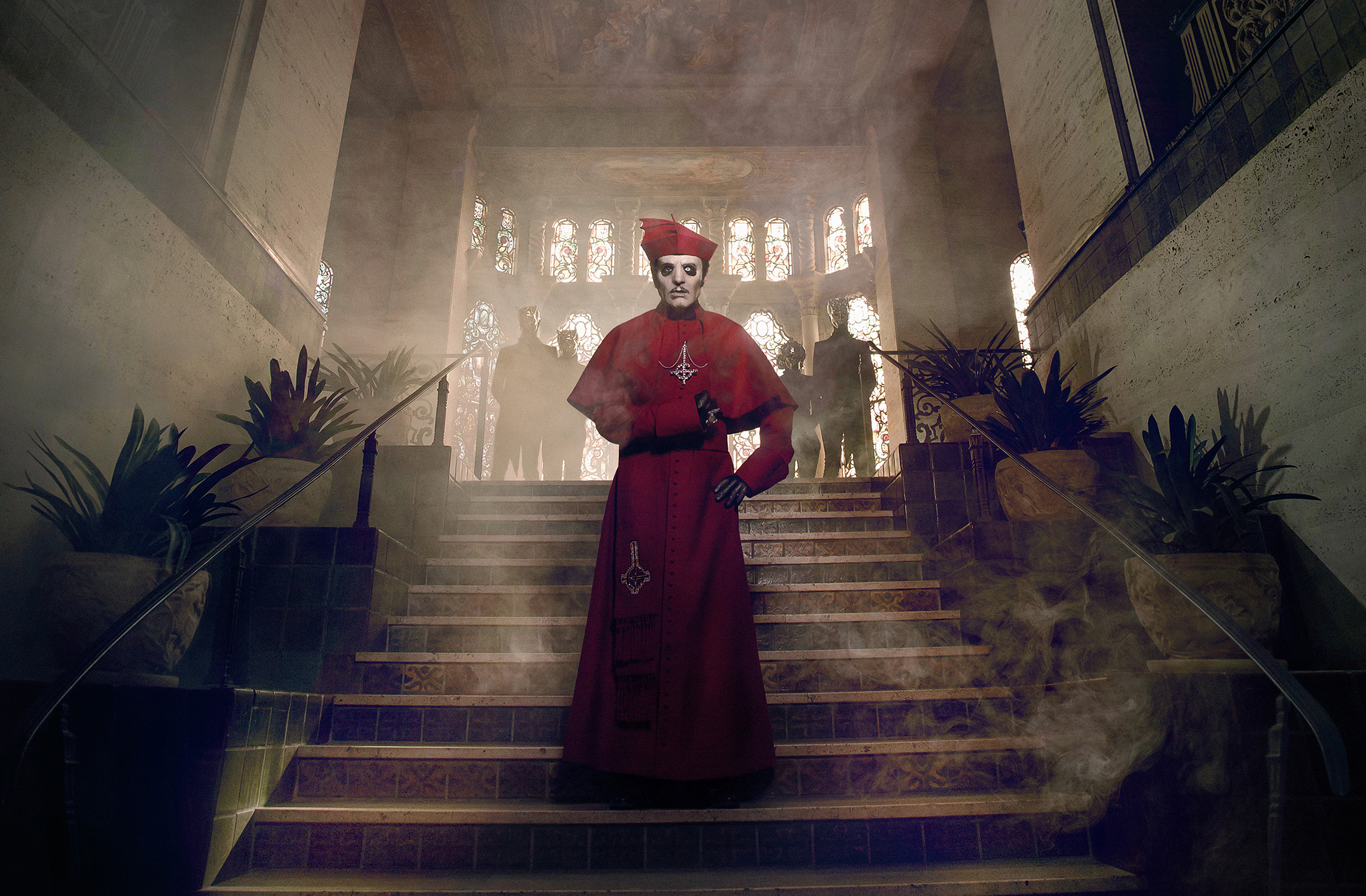 Your stage presence is pretty theatrical. Are rehearsals for your live show more akin to, say, those for a Broadway show, or do you focus primarily on the music?
We tend to focus more on the music. I’m not a super-fan of rehearsing [laughs]. It’s hard to summon the spirit to appear when there’s no smoke machine on and when the lights are different. I tend to find those sort of rehearsals are more for muscle memory, in terms of just making sure I can sing a certain thing … Especially when you’re rehearsing a new set, because this time around we’re going to change up the set a little and at least try to play a few songs that we haven’t played before, and you always want to try that … More than often, there’s a reason for a song not being played, and it might just be that it doesn’t work out very well. It’s hard to play, and you never really get that vibe going. The placement of the song in the set is very important. Like, OK, we’re going to try this song after this one now and see if the energy is right. It’s a little bit more mathematical and in a sense more scientific, whereas once you do the first show, that’s when you go into the role a little bit more, and it gets a little bit more magical or whatever.

Is there a particular song that you’re looking forward to playing live for the first time?
Oh … aaaahhhh … I don’t really want to give it away right now! There may be a song on the list right now that we end up not playing. Let’s put it this way, there are some songs from the new album that we haven’t played before, and also there are some songs that we’ve played in the past, and other songs that we haven’t played from previous albums that we are considering playing. But again, you need to play them together and try them out. The real test is trying them in front of an audience. There have been songs throughout our tours that I thought were going to be really good to play live, but then once you play it, it just does not fly because the crowd isn’t responding very well. It doesn’t mean that they start booing, but you notice that it goes down in intensity … or you see people lose their interest, or that’s when they all of a sudden go buy beers.

Does that take you out of character when you’re on stage? You have the music, which is awesome, but you also have the visual component that goes with it. Is that part of why the setlist is so important?
Oh, absolutely. Sometimes, I guess people, especially nowadays, people have a tendency to watch live shows beforehand on YouTube, and some people want to know the setlist beforehand, which I strongly recommend people not to. There’s a reason for a setlist being the way it is. As much as I admire Bruce Springsteen for taking requests, basically, for us it does not work like that …

In my perfect world, I’m a little bit of a … what do you call it? I like comfort in the sense that preferably, I’d like to play the same set every night and get better at performing it that way, because you know how to distribute your energy so that by the last couple of songs, which are our most intense … You need to sort of sit on energy to make them explode.

It’s interesting to hear that you look for comfort in your live sets since you change your persona every album. Is that something that’s difficult to juggle—comfort versus not wanting to repeat yourself?
When it comes to certain aspects, yes. When it comes to the live show, I think, let’s just say, most bands throughout rock history have found their form at some point. And then, after you’ve found that form, you don’t want to change too much. If that form has taken you to a certain plateau and that has given you a certain amount of success, that will be what people expect of you and that will be what you’re comfortable doing … However, what we do intend to change up, what will always change, more from a production point of view, is what we wear, what the stage looks like, effects and props and actors or whatever. One easy example of what I’m talking about that we should not do is that over the years, ever since Papa I became Papa II and onwards, there’s been a little vocal minority that felt that Papa I was menacing and evil, and they wanted that menacing evil to stay and any animation that went beyond that rigor mortis that he had was selling out or whatever. The thing is we can never return to that. That worked because we played 30 minutes in the dark, basically, with all fog on stage. That worked because you saw very little. But we can never go back to that because we’re playing big places now. We’re playing for two hours. You need animation. You need things to happen.

I watched the webisodes for the Prequelle album, and what struck me most about them was how funny they were. I liked that there was a sense of humor to them and not just all grim and foreboding. Is that something you enjoy playing with, too? I don’t want to say absurdity, but maybe the campiness that’s always been the backside of horror.
Absolutely. I think campiness—for the lack of a nicer word for it—is very much in line with the trashier nature of the culture that is horror. I’m a big fan of kitsch. I’m a big fan of trash culture. For some reason, there’s a minority of people who tend to think that the devil and death metal and all that shouldn’t be in any way about humor. Even though, believe me, I truly admire and I really appreciate a good dose of serious, orthodox darkness as well, but for me, looking at it from a philosophical point of view, laughter and satire and comedy is very, very against establishment, church, conformity. For me, humor and comedic elements is, for one, very natural for me. I like things that are in one way or another comedic. But I think if there was an argument for the campiness overshadowing the seriousness that should be satanic metal, I definitely beg to differ. No, no, no, this is very blasphemous, because it’s about laughter. Laughter is the work of the devil. Remember The Name of the Rose? According to old ways of Christianity, laughter and comedy were definitely the work of the devil. I think this is in all aspects utterly blasphemous from that point of view. But, at the end of the day, I’m a big culture fan. I love kitsch and having fun and living my life and filling it with as many enriching things as possible. I think a lot of the things I find rewarding and pleasant in one way or another are represented in what I’m trying to do with Ghost.

Prequelle is sort of a modern re-telling of The Black Plague. How do you think that period of history relates to now?
I’m talking from a Westerner living in a Western world perspective—we tend to talk about our contemporary time as being almost pre-apocalyptic. We tend to talk about the world as something that’s about to end. Of course, from an environmental point of view, maybe it is. I do not know, but maybe it is. But there are a lot of people on this earth who tend to persevere. We will probably do whatever it takes not to melt the ice, eventually … Maybe too late, but whatever. The thing is, the world has come to an end many, many times. In the 1340s and 1350s, people thought this was the end of the world. I’m sure that people in places other than the Western world are facing the end of the world. We all know that in Syria, millions of people were facing the end of their world. Looking in hindsight on The Black Plague in the 1300s, we know that it wasn’t. We had the 1400s, the 1500s … way further than anyone in the 1300s could ever imagine. I think especially now in modern days, we tend to pride ourselves in thinking, well, there’s nothing new to say, there’s nothing new to write. I think we overblow our significance and also the ultimate nature of the day that we’re living in. Who knows, maybe in 20 years, we’ll look back and say, “The 2010s, wow, I’m glad that’s over.” Like, look at a presidency. It’ll end after a few years. It’ll change. Things fucking change. They always do.

That’s an oddly hopeful message from the leader of a satanic metal band …
It’s there to shine a light on the idea that things do change. Even though Prequelle on the surface is a record about death and dying, it’s actually a record about survival.

Ghost’s A Pale Tour Named Death tour will pass through Sacramento at the Community Center Theater (1301 L St.) on Tuesday, Nov. 13 at 8 p.m. Tickets start at $39.50 and can be purchased through Sacramentoconventioncenter.com.