Giant Squid’s The Ichthyologist Takes the Band to Greater Depths 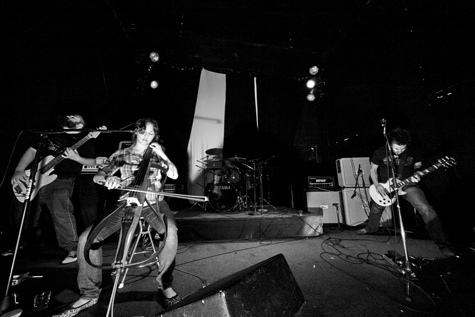 The ocean is home to the world’s largest creatures. One of the most fascinating of these mammoth beasts is the giant squid. Rarely photographed, its elusiveness belies its ponderous size. As a result, the mysterious creature has inspired folklore, myth and art worldwide. It is fitting that such a beast would serve as the moniker for San Francisco-/Sacramento-based metal band Giant Squid. Titanic in sound, Giant Squid is difficult to categorize. Though the band leans heavily on the tenets of doom/stoner metal popularized by groups such as Isis—riffs are heavy, thick, slow and hypnotic and paired with wailing vocals laden with despair—Giant Squid pushes the avant-garde metal envelope even further, tossing in atmospheric keys, horns and strings into the mix. This strange sonic brew made the group’s debut full-length, 2006’s Metridium Fields, a noteworthy release for underground metal fans. On Feb. 3, Giant Squid may extend its reach even further with the unveiling of their latest album, The Ichthyologist.

Weirder, heavier and deeper than the group’s previous efforts, The Ichthyologist is a sort of heavy music kaleidoscope. Considered separately, the songs seem to share little in common with one another: The jazz-y “Sutterville” sways like a drunken zombie lounge singer; while the opener “Panthalassa” starts with a sinewy, serpentine guitar line that snakes into a wall-squalling metal noise. Yet, when listened to as a whole, these disparaging colors form a mesmerizing picture.

A portion of the album’s success should be credited to the man turning the knobs. In-demand heavy music producer Matt Bayles, who has worked with the aforementioned Isis as well as Mastodon in the past, served as producer for The Ichthyologist. According to Giant Squid singer/guitarist Aaron Gregory, the band, without the backing of a label, pooled its resources to pay Bayles’s considerable price tag.

“Everyone in the band chipped in their savings and then some,” Gregory says. “We sold some gear, and we finally got around to putting the rest of our Monsoon EPs online, and made some money off of those real quick. We managed to do it somehow. We put together a really large sum of money and hired him.”

It was money well spent. During our interview, Gregory refers to Bayles as a “taskmaster,” but says he appreciated the producer’s strictness.

“He really whipped us into shape, and made us make sure we play every note to the best of our ability, or he wouldn’t let it go,” Gregory recalls. “It’s one of the first records I’ve walked away from and said, ‘I’m pretty much OK with every single thing I did on that record.'”

The Ichthyologist‘s cohesiveness may also be attributed to its concept. The album coincides with Gregory’s first, yet-to-be-completed graphic novel by the same name. Gregory says that the comic book version of The Ichthyologist is, in part, inspired by The Swamp Thing. “I love the idea of a man becoming something so much more than a man, and yet kind of less than a man, and the spiritual heaviness of Swamp Thing, especially when Alan Moore started writing it,” Gregory says of the classic DC Comics character.

Gregory, a professional SCUBA diver working at San Francisco’s Aquarium of the Bay, discussed the audio, visual and philosophical aspects of The Ichthyologist in a recent interview. 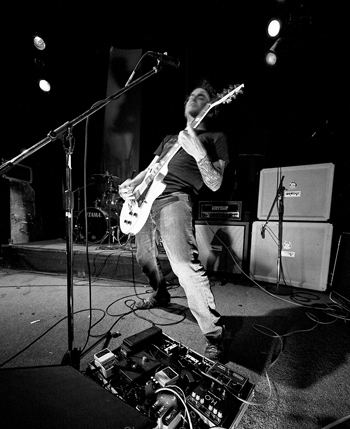 You’re self-releasing The Ichthyologist in a limited run of 1,000 copies. What made you decide to take that route with the album?
We spent an incredible amount of money to work with Matt Bayles, and we’re maybe not the caliber of band yet that could get a label to pay us right upfront enough money to hire Matt Bayles. Honestly, I doubt most labels would be able to give us half of the advance we would need to work with Matt. Because we did it for ourselves, we wanted to make sure that we didn’t give this album away to a label for nothing and we all kind of lose our ass. In all reality, you don’t see hardly any money back from small labels. That’s just part of it. That’s fine too, because they work their ass off and they have bills to pay too. In this way, if we sell a thousand of them at 12 bucks a pop, we get all of our money back. We get to break even. We’re at the level that we can do that on our own, for sure. The pre-sales are already exploding. We sell a shit-ton of them every day. Hopefully when all is said and done, we would have signed a new label deal or two, six months after the release, it’s our goal to find someone to put it out on vinyl and put it out on CD.

I’ve read that The Ichthyologist is based on a graphic novel that you’re working on. Would you like to talk about that?
Yes, the album is based on a graphic novel I’m writing that goes by the same name. The protagonist has lost it all in haphazard ways and takes on the abilities of a sea star to survive it, and thus begins this huge journey, that no matter what happens he ends up healing, because sea stars have this regenerative ability. The album is basically the poetic description of my character’s origin. It’s the poetic downfall from the beginning to the end of his origin. The graphic novel goes much, much more past that.

Did you know that you wanted to tell this story both musically and as a graphic novel, or were you not sure?
I came up with the album title first. I thought that would just be a great album name, The Ichthyologist. It’s perfect for me—perfect for Giant Squid. Then I was talking to someone in the comic book industry, a good friend of mine, about some ideas to pitch for the company he works for, which led me to this concept, under the same name. The songs had already been written, and I worked the general themes of those into the story. There’s a song on there called “Mormon Island,” which is a very old gold mining town in the Sacramento area that’s long since gone and is now actually sitting at the bottom of Folsom Lake. We were writing this very creepy song, and someone said that it sounded like a church underwater, and I was like, “Shit, I know where there’s a church underwater. There’s a church at the bottom of Folsom Lake, a town called Mormon Island. We’ve got to call this song ‘Mormon Island.'” Then I was like, “How can I work Mormon Island into the story?” And by doing so, it opened up all these different angles into my story. So, as I’m writing the graphic novel, writing the album helped inspire a lot of different things, and vice versa. There would be ideas, right from the get-go, like, “I have to write a song about this moment in the dude’s creation, this moment in the guy’s downfall,” and so on. 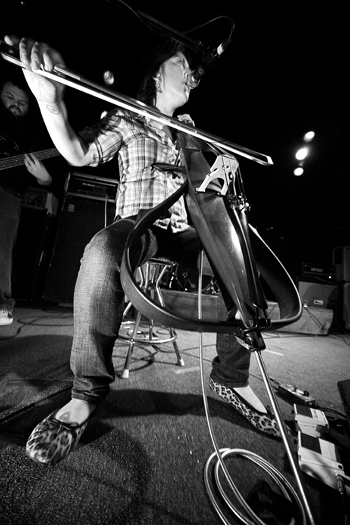 Looking at the other titles on the album, there’s one that mentions the Donner Party; and Ernst Haeckel, whose image you used on the cover, has a peak named after him in the Sierra Nevadas. There’s also a mention of the La Brea Tar Pits. I don’t know if it was intentional, but the album seems to have a very firm sense of place. It’s very Californian.
Absolutely. I’ve always been obsessed with California history, and have incorporated it in a lot of ways, sometimes more subtle than others, in all our albums. We also had a 7-inch called “Sutter’s Fort,” and there’s a sequel to “Sutter’s Fort” on The Ichthyologist called “Sutterville,” which is more or less about Sacramento refusing to give up its capitol-ship. Sacramento kept flooding in the 1800s, and people kept saying, “You need to move your capitol. This is a pretty shitty fucking place to have a capitol.” And Sacramento refused to give it up, and after huge bouts of cholera and death and that kind of shit, they just raised all the streets 10 feet in the air. The actual story of The Ichthyologist is time-hopping as well.

There’s a mix between the human history of California and the natural history as well. Does working in marine biology allow you to see the scope of both? I would imagine being underwater, you can see how the Earth grew up out of it.
You know, not to get too heady, but when you’re 40 feet down at the bottom of the ocean in Monterey and you’re surrounded by kelp and a rocky reef and tens of thousands of fish swimming around”¦you are basically staring right at the godhead. You’re staring at the spiritual center of it all. As far as our planet goes, it all came from right there. You also never have felt like you belong as much as you do when you’re down there. It’s a very strange and surreal sense. It opens up a lot of spiritual thought and philosophy, and who we are in the grand scheme of things. The album is a little heady in some ways, because it does touch on stuff like that. The grand result of the graphic novel kind of deals with that—God being underwater. People go into the seas to talk with God. 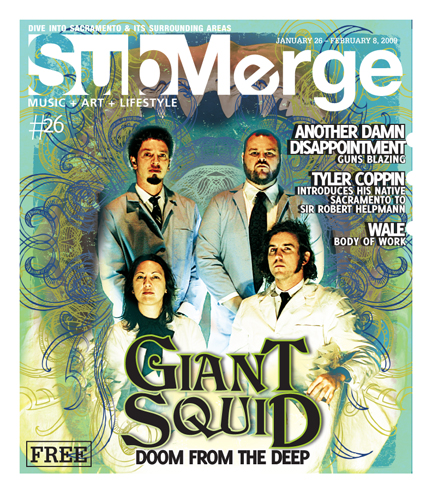