How Myths Are Made 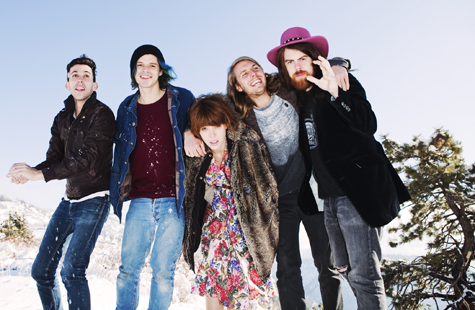 Photo above by Autumn De Wilde

The story of how indie rock band Grouplove formed is so unlikely, it’s practically mythic. It’s fitting then that the band first met in Greece on the island of Crete. New Yorkers Hannah Hooper and Christian Zucconi were attending an artists commune there where they bonded with other like-minded individuals from around the globe: Brit Sean Gadd and Californians Andrew Wessen and Ryan Rabin. Though the quintet hit it off, it seemed unlikely that their meeting would be anything more than just a one-off occurrence in a foreign land.

But there would be more in store for the members of Grouplove than just a fond memory. A reunion brought them back together again, this time in Los Angeles, where Rabin, now drummer/producer for Grouplove, had a studio. He invited everyone down to record just for fun. The recordings resulted in the band’s self-titled debut EP, which was released in January 2011.

“When we made the EP, it came to us naturally,” says Zucconi, Grouplove’s guitarist/vocalist.

They were all stoked on the recording, but there were still obstacles, namely the thousands of miles and an ocean that separated them. Eventually word started to spread about the band over blogs, and it became apparent to Zucconi that they had to make a real go at being a band or they would regret it.

“We were all kind of in our own lives. Sean was in England, and Hannah and I were in New York. We all wanted it to happen, but we were afraid to speak up and really make it happen because there were so many obstacles in the way,” he says. “When we got home, and we were listening to the recording and sharing it with friends and everyone started reacting so well, it just started to feel like we should really try to make this a thing.

“I remember writing an email to Sean, I said do you want to drop everything, your life, your family and friends and move out to L.A. and try to do this thing, and he was like, ‘Of course,’” Zucconi continues. “He was on the flight a week later.”

Grouplove didn’t waste any time. In September 2011, the band released its first full-length album, Never Trust a Happy Song, a 12-track clinic on the possibilities of electro-pop infused indie rock. Snarling guitars play well with glitchy beats, and the lead vocal duo of Hooper and Zucconi create melodic bliss with their soaring harmonies. It’s not all blips and bloops either, as the spare, folk-tinged track “Cruel and Beautiful World” will attest. Each member shares writing credits on every song on the album, which speaks highly of the band members’ chemistry. It would seem that they had been writing songs together for a decade or more, but Zucconi says it’s the newness of their partnership that aids them in their wide-open songwriting process.

“There are no bad habits that you picked up from joining up with the kids you grew up with and started a band when you were 12,” he says. “We all kind of started with a clean slate, which is something cool and refreshing. Being someone who has played in bands for a long time, it’s really cool to experience that.”

In the following interview, Zucconi talks about a recent reimagining of Andrew W.K.’s “Party Hard,” which the band performed for the Onion A.V. Club, and gives Submerge some insight on “Tongue Tied,” the band’s biggest hit to date, which in addition to topping charts, has also appeared on Glee and in a popular Apple commercial.

I was messing around online, and I saw you guys did an Andrew W.K. cover for the A.V. Club. I’m a big Andrew W.K. fan.
Oh cool, what did you think of it?

I thought you guys did an amazing job. I love covers that stray from the original.
We wanted to do a reinterpretation of it, change all the chords and the chord progression, but still keep the melody.

I liked the bit you guys did with the chorus, “We will always party hard.”
Thanks, man. I don’t know if you saw online, but he [Andrew W.K.] really liked it. It was really cool.

Oh, so he had heard it?
He Photoshopped himself in one of the shots of all of us in the costume. He put himself in the middle. It was really funny.

Were you a fan of the song?
You know, it’s weird. I kind of missed the popularity of that song. Hannah and the other guys were big fans of it. I guess Hannah a couple of years ago would dress up as Andrew W.K. in the city [New York] for Halloween. Of course, she came up with the idea of getting into costume for the cover. I didn’t have any attachment to the old version, and that kind of helped us. Being innocent sometimes helps with approaching songs, in a way. I remember the album cover really well. It was an iconic thing at the time, but I never really heard his music before.

Just last month, you topped the Modern Rock Radio charts with “Tongue Tied.” How did you react?
It was super surreal. The life of that song has been really interesting, and you step back sometimes to see what’s happening. It was at No. 3 for the past 12 or 13 weeks, and that we were all excited about, like, “Wow, this is really cool.” Then more people started playing the song radio station wise. It’s really exciting. It’s hard to really take in what it means, but we were really pumped on it, and everyone we worked with was pumped. We went out and celebrated. It was really cool.

When you get in a band and start writing songs, you probably don’t think about charts…
Never, yeah.

But when it happens, it must be something like you don’t realize how cool it is until it actually happens. Is it that sort of thing?
Yeah it’s kind of like that. It’s interesting, because it’s a weird concept. Like, when you’re writing a song and you’re playing with the band, you’re not thinking about that. “I wonder what our radio plays per week are going to be?” That was all new to me. As we entered that world, I was just learning about it every day because I never experienced it, and as a listener, I never really paid attention to that kind of stuff. We’re all really proud, and it’s great that people out there like our music and are responding to it. That’s why we do it. It’s great to get that kind of reaction.

That song in particular, I know that you guys share writing credits on all the songs, but how did “Tongue Tied” come about?
It was an early song… I was in L.A., and we just kind of moved there. Sean had just moved to L.A., and he’d only been out there for a week or two. I was scoring a really somber film for my friend. I had a piano out and this little home studio that I’d set up to score. I was working on this really heavy scene, and Sean and Hannah were in the house next door, and I just took a break for a minute and started messing around on the keyboard and just started playing that riff, and it was super fun. It just was a whole 180-degree turn from the song I was just working on. It was weird that this upbeat, happy thing just came out of me. I put down a drum beat behind it and some bass lines–there were no vocals at the time–and I brought it to Sean and Hannah and we started playing it in the yard, and everyone started dancing. They were like, “Play it again! Play it again!”… While we were listening back to it, and everyone was jumping up and down, Hannah started singing “Take me to your best friend’s house…” And we just kind of wrote the lyrics on the spot.

By the time it went through the whole Grouplove machine with Ryan producing, and everyone’s awesome ideas, trading thoughts, it just became a 10 at the end. It really came to life in the studio, and we were all just happy with it.

It was a fun learning process, too, for me personally and Hannah, because we’d never tried to write an upbeat electronic pop song, so it’s fun to experiment in that genre and put our stamp on it, so it was a good experience.

When you guys were done with that one in the studio, did you get an inkling that it would be one of the more recognizable songs on the album, or be the one to push it forward?
Yeah, we did kind of feel that after we were listening back to it. When we were recording, during the process Canvasback and Atlantic [Grouplove’s record labels] were super cool and let us do our thing in house. They were never checking up on us, so when the time came that we had some roughs of the album to bring into the record label office, like, “This is what we’ve been working on for the past eight months,” that was the first song we played them, and they were like, “Oh shit!”

You were talking about Ryan as producer, and he’s in the band also. Does he go into producer mode when you get in the studio? Is it almost a Jekyll and Hyde sort of thing?
When we met Ryan in Greece, he was talking about how he loves music and he’s into recording bands and has been doing so since he was 16. When we made the EP, by accident, we were all in L.A. after meeting in Greece, and we had nothing to do one day. He was like come over and record some stuff just for fun. He has this ability to take the beginnings of a song and put life into it in a way you’d never expect, just by his drumming, his ideas and his arrangements. When we met each other, that’s how I got to know him, through the recording process and writing together and producing. That’s just who he’s always been. We trust his ideas, and he’s super talented. I’ve been in bands a long time, but I never really knew what a producer did because whenever we’d go into the studio, we’d do it all ourselves, and we had all the ideas. A producer brings a whole other perspective on it. He says to speed things up or slow them down.

It’s kind of like how we write. We’re all super open to each other’s influences, because they’re so different. Whoever writes the song, it has everyone’s influences all over it once it’s done. 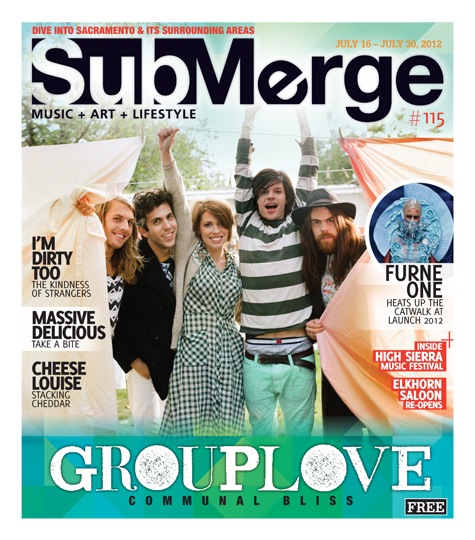 Grouplove will be a part of this year’s Launch Festival. The band will play at Cesar Chavez Park on Saturday, July 28, 2012. Bring your shades and sun block, because this show gets underway at 11 a.m. For a full rundown on this year’s Launch Festival, go to http://www.launchsacramento.com/, and for more Grouplove, go to http://grouplovemusic.com/. (Submerge hasn’t looked, but we’d imagine that Grouplove.com will bring you to an entirely different sort of website.)