Here We Are, Now 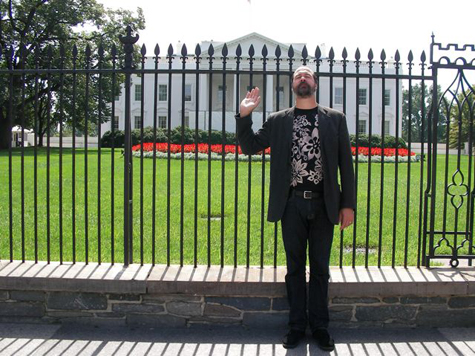 For as long as Nirvana was in existence, bass player Krist Novoselic served as the tall, somewhat goofy counterpoint to frontman Kurt Cobain’s charismatic, acerbic personality. Whether it was taking a bass to the face while performing at the VMAs or crafting impossibly hook-y bass lines to accompany Cobain’s rousing wails and anthemic rock song structures, Novoselic remained a strong constant throughout the tumultuous and all-too-brief history of arguably the most important rock band of the past three decades. With just three studio albums–the last of which, In Utero, was released in 1993–Nirvana’s music continues to be held in high regard among fellow musicians and fans. Meanwhile, numerous posthumous releases have given Nirvana legs beyond its years, expanding the band’s fan base to a younger generation.

“I’m so proud of it–that it’s so enduring,” Novoselic says of his involvement in Nirvana. “I mean, God bless Kurt Cobain. He was such a visionary. That’s why the music has endured.”

Since Cobain’s death in 1994, fellow Nirvana alum Dave Grohl went on to form another wildly successful band, The Foo Fighters, and more recently returned to the drums in rock supergroup Them Crooked Vultures. But Novoselic took a different route. Though he released one album with the group Sweet 75, and the short-lived Eyes Adrift (with Sublime’s Bud Gaugh and Meat Puppets’ Curt Kirkwood), Novoselic’s main focus has been politics. Though he’s teased at a couple of runs for office–lieutenant governor of Washington in 2004, which he later decided against; and last year as county clerk of his home Wahkiakum County, Wash., which was done to protest a Washington state election law–Novoselic’s main work has involved youth legislation and voter reform. The bass player turned poltico will make an appearance at Sacramento State Sept. 23, 2010 to discuss these matters as well as constitutional issues. He discusses this upcoming event as well as his thoughts on where politics are heading in the following interview.

In the write-up I read about your appearance at Sacramento State, it said that you’re going to discuss the effects of social networking on politics.
Yeah, it’s like, I got started into politics in 1995, and people were excited that this bass player/celebrity was being active and what kind of impact that would have on youth culture and youth participation. People would bemoan how come more young people don’t attend party meetings, and why are groups like…the Elks club closing and why are all the members in their 80s? Association must be dead. But it’s like, oh no. Association is exploding. It’s just finding new forms…

Association should be voluntary. People are compelled to associate with other people. I want to hang out with people who are interesting and compelling, bring something useful to the party. I don’t want to hang out with draining people; you know what I mean? [Laughs] That’s what association is about. You shouldn’t be forced to do anything.

I know you’re active in Washington. Do you follow California politics closely?
I’ve been following Proposition 14 [also known as the Top Two Primaries Act, which would create a single primary ballot], and I work with a national group called FairVote: The Center for Voting and Democracy. We put out a paper for fixes to Prop. 14. Two of the major fixes are allowing write-in candidates and moving the primary from June to September, so you can have a shorter campaign season, but you could also have more voices as part of the election, so instead of the top two being determined in June, they’d be determined in September.

Another thing we recommend is an associational component, this “prefers party” business… There’s going to be a trial in Washington State in November regarding the constitutionality as applied. The U.S. Supreme Court has upheld it as spatially constitutional, but now that it’s been used in Washington, the court wants to see any harm. I was going to touch on that.

You know how I was just talking about draining people, and who you associate with? You know Oscar the Grouch, you remember him from Sesame Street? He can say that he prefers your party from his garbage can, even if we have nothing to do with him–on a ballot! I see what the intention is behind the Prop. 14 and the “prefers party.” You want to open up the system, and I’m glad that those partisan primaries are gone in California. They’ve really outlived their usefulness as a practical political reform. I just can’t see how you have people associating online, it’s going to be a matter of time before Republicans or Democrats take full advantage of this Internet and social networking association, or someone’s going to beat them to it, and there’s going to be a new party or parties. A top-two voting system allows that… because it’s a majority voting system.

There should be an honest ballot, where if you’re a Democrat or a Republican or whoever, you were chosen by those people. I reject the idea of party bosses. That’s old-fashioned. I say let the major parties nominate hacks and losers, and the voters will know this, and they’ll vote for the person who best represents them. The point is, let the parties nominate, and let the voters choose.

When I was reading your blog for Seattle Weekly, I thought it was neat that you were talking about the smaller elections, and not just the sexy elections, like president or whatever. It seems to be that people don’t turn out for the smaller elections. How should we get people motivated not to just come out for the big votes, but the more localized and primary elections as well?
Nothing captures the imagination like a presidential election. A lot of times, there’s no reason to vote. With gerrymandering and redistricting, the districts are skewed. The insiders have settled the election for one party or another before anyone got a ballot. When I was starting in politics in the ‘90s, it was like, let’s get out the vote for this Democrat in Seattle who wins with like 70 or 80 percent of the vote. It’s just like, rah rah, hey, let’s get out the vote. You’re asking people to get involved with the vote, and they get a ballot, but the race is uncontested or uncompetitive. It’s redundant–even with the top two. My nephew is 20 years old; he got a primary ballot and he was like, “You mean I have to vote again?” There’s only two people on the ballot. That’s how it works! You’ve got to do it. These people are going to make decisions on your behalf.

What do you foresee happening in November? Do you see a big shift coming in Washington D.C.?
I don’t know. A lot of it seems to be horse race press. It’s easy to fall into just following the horse race, but there’s good information. Somebody in Washington analyzed who was voting in the primary, and there were way more Republicans than Democrats.

I don’t know what’s going to happen. What do people want? You can go back to the Republicans if you want. They haven’t shown anything. I remember back to 1994. What were the big keystone reforms when the Republicans were in power? I don’t know. I didn’t vote for any major party in the primary. Where I had choices of third party or independent, I always voted for them, because we have the top two in Washington, so I get a second choice. I can vote my conscience. 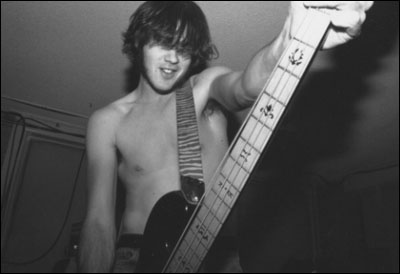 When Nirvana ended, was there anything in particular that made you want to get involved with political matters?
It was just really compelling. I’m really interested in it–reading about the issues. I’m really into election reform–ranked choice voting, proportional voting. There was a time when I thought I was going to run for office, but it didn’t really fit with what I want to do, which is more of a transpartisan, transformational politics. I’m going to try to reflect that in my speech on Sept. 23. Politics are about people, and I think people should come together. It all started even before Nirvana, with punk rock music…I was part of this group that rejected mainstream music and mainstream values in a lot of ways. We found each other and communicated and associated. We had the same needs. We wanted this punk rock music and this punk rock culture, and we had similar values. That’s what people do. You just find groups. Now with the Internet, it is way more decentralized. This was back before the Internet when you would get a Xeroxed fanzine in the mail, or you’d find another fanzine–Maximum Rock ‘n’ Roll or whatever–in a record store. There was no coincidence that there was that anarchy “A” symbol. Anarchy isn’t about smashing windows or protesting some global ministerial meeting; it’s actually about being organized and people coming together voluntarily and making independent structures outside of the corporate or governmental spheres. It’s an enduring idea. It’s up to the individual or groups of individuals to make it work for them.

Since you’ve been working in politics, how much change have you seen in the electorate or how politicians reach out to the public, and do you think people are more engaged in politics than they were 15 years ago?
I’m still assessing it. The tools are developing where campaigns have their Facebook page and a Twitter. The key to a campaign is to find a successful balance of holding a message together, but also not really keeping a lid on things, because on the Internet things are more decentralized and tend to grow more organically, so you can’t really have this top-down structure. People want to feel like they’re a part of something.

Changing gears a bit, you write about music a lot on your blog also, and you mentioned Sleigh Bells and M.I.A. You said of Sleigh Bells, “‘A/B Machines’ allows me to gauge our progression into the 21st century. We’re definitely in a new musical era.” What did you mean by that?
Well, it’s not about guitars and drum sets anymore. This is all digital technology. The way the music is produced is really noisy and abrasive, sonically, and your ears have to be attuned to that. You have to break through…years ago, even a lot of people today, wouldn’t be able to listen to it, because they’d think their stereo was broken. Yet, all the technology has gone into noise reduction and crystal clear recording. It’s a different sensibility. It’s a different world now. People see things differently, they hear things differently. It’s not 1955 or 1985 or 1995. It’s 2010, and things are different. That’s the nature of things–they change. We can imagine that politics are going to change, and how are we going to do it. Political change is happening, but it’s happening slowly, which is probably a good thing. A huge change could destabilize things, and with the economy perhaps it’s not a time for instability. Music’s in the digital era; we need a democracy that speaks to what is going on in the world, in the country, with the technology and people social networking.

Do you think Nirvana would have faired well in the current musical climate?
Oh, that’s impossible to answer. We’re still fairing well. We’re a huge band.

Are you working on any music projects now?
I think soon, I’ve got this collaboration coming out with a lepidopterist… Did I pronounce that right [laughs]?

I’m not sure…
A butterfly expert, a naturalist. He’s reading a poem on wildlife and the natural world, and I’m playing acoustic guitar, so that should be out soon. Produced by Jack Endino [producer of Nirvana’s Bleach]. Grunge!