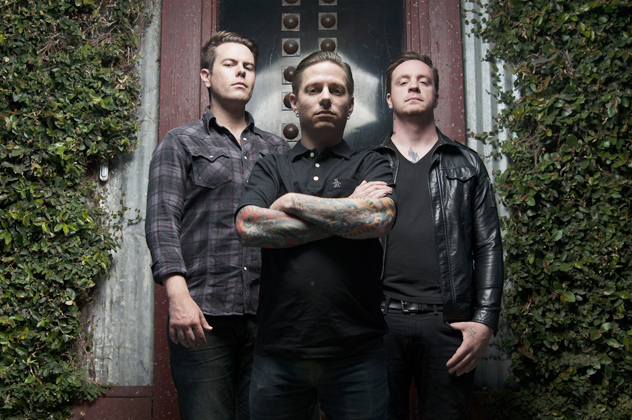 Horseneck: Born out of Booze and Ready to Rock Your Face

Most of us would agree that bars are wonderful places. They’re great places to go with your friends or significant others, or to meet new friends or significant others (at least significant for a night or so). And, hey, if you go alone, your bestest buddies Jack Daniels and John Jameson are already there waiting for you. Besides sources of booze, bars can also be houses of inspiration. Artists, writers and musicians have flocked to bars for as long as they’ve existed hoping to find their muse—either at the bottom of a glass, or hidden in the cacophony of overheard conversation. As Sacramento heavy music purveyor Anthony Paganelli tells us, his newest band Horseneck owes a lot to local bars.

He had known bandmate Lennon Hudson through their mutual manager, Eric Rushing. Paganelli and Hudson were both entrenched in the music scene as members of other bands (Paganelli as part of Tenfold, Shortie and Will Haven, and Hudson as part of Still Life Projector). The two got together one night at Golden Bear with Hudson’s longtime friend Matthew Ison, and the conversation eventually turned toward the three playing music together.

“We weren’t doing anything else but drinking and having fun,” Paganelli says. “We were like, ‘Might as well start jamming, kill time that way.’ We started a band. It wasn’t this band. Then we changed it to Horseneck and it just felt right.

“Will Haven wasn’t really doing much. They’d put out a record and did a little bit of touring in Europe, and that was it,” he goes on to say. “I was getting really bored and I wanted to start something new. I had all these riffs and ideas, so I called Matt and Lennon and said let’s do this.”

Paganelli says that he formed Horseneck because “there weren’t very many heavy bands out in Sacramento that I could relate to.” A counterpoint to the many scream-o and metalcore bands on the scene, Paganelli wanted Horseneck to hearken back to a different, blues-based era of metal.

“I was drawing influences from all the classic rock like Led Zeppelin and stuff like that…blues-driven rock stuff,” says Paganelli, who says he first started playing blues when he picked up the guitar, inspired by the music his father would listen to, before he got into punk and metal later in life.

The music got heavier, though, when the band decided to put Paganelli behind the mic. He says Horseneck felt right as a power trio, and they really didn’t want to go out and find a vocalist that would possibly stir the pot.

“None of us could really sing, so I just grabbed a mic and started yelling and it just worked,” Paganelli explains. “We became this heavy band, but that was what we wanted anyway. We wanted to do what everyone else wasn’t doing.”

Their vibe must have been right as the band released two EPs in 2013. The first, Belly Full of Blood, is the heavier of the two—a low, throbbing, grungy, Melvins-esque five-song EP with similarly gruesome song titles like “Dirt Turkey” and “Hooker Toilet.” The second, The Worst People Ever, is still heavy but is less pure brute force and has more of a calculating attack.

“The first EP, we had just started playing. That was the first five songs we wrote. I was trying to figure everything out,” Paganelli says of the difference between the two EPs. “I feel like it was a little bit harder of a record, too—more metal influence. With The Worst… EP, we were a little bit more organic about writing. We were jamming more, and I felt a little more confident with my vocals. With the new stuff we’re writing, it’s getting more organic, and I’m even more comfortable with my voice.”

The differences between the two was one of the reasons why Horseneck ended up having two separate releases as opposed to one full-length album.

“We never planned on releasing anything,” Paganelli says. “I gave it to Eric Rushing, because he’s a longtime friend of mine, and I thought he could help me get on shows or just network and stuff, and he told me to hold on to it and not release it. He said, why don’t we go back and record more songs, and we’ll talk to the label, Artery Records, and maybe release it through Artery.”

Horseneck has a distinctly different sound than many of the bands in Artery’s stable; however, both Rushing and Paganelli thought Horseneck could help the label diversify.

Both EPs were recorded at Pus Cavern with the help of Matt Pedri, who’s worked with Armed for Apocalypse and Will Haven in the past. The Worst People Ever was mixed by Dance Gavin Dance’s Josh Benton.

“We went back and recorded seven tracks, which became The Worst People Ever EP, but they sounded totally different,” Paganelli says. “We recorded them in a different process and spent more time… We weren’t going to put them both together as a weird sandwich, like, we don’t care if they sound weird. So I said, why don’t we release them as they were recorded? That sounds better. It makes more sense. We felt comfortable with that approach, and Eric thought it was a better idea as well.”

Paganelli says the band is currently writing new material for a possible full-length, hopefully to be released early next year. He says that the confidence in his songwriting that he built coming into The Worst People Ever is continuing to grow on the new material.

“I feel like I’ve thought it out a little more than I did in the past,” Paganelli says of the new material he’s working on. “Having more confidence in my ideas helps.”

Paganelli also has a new songwriting partner, his 1-and-a-half-year-old son.

“I play guitar for my son, and when he likes it, he dances around. So sometimes I actually bounce riff ideas off of [him],” he says. “We play guitar all the time at home and sing songs and stuff. It definitely changed a bit of my songwriting.

“It’s more difficult being in a band as a parent, because, obviously, you have a lot more responsibility,” Paganelli says of being a rock ‘n’ roll dad. “Touring is a little harder, practicing is a little harder, but it’s still doable, and it’s still fun. We still do it. I don’t think I could not do it. He enjoys it. He watches me do it, and maybe when he’s a bit older, I could play with him, or he could play with me. It would be rad.”

It’s funny to think that the good chemistry and momentum Horseneck has going probably started with a simple conversation between colleagues over drinks at a bar. The opening track on The Worst People Ever, “The Birth of the Neck,” is actually an homage to the band’s booze-y beginnings. It’s a short track featuring ambient bar noises—conversation, people fiddling about. In fact, the whole EP is based on the bar that Paganelli, Hudson and Ison usually hang out at, Cheaters.

“Most of the songs on that EP are reflections or stories or things that we went through hanging out there all the time,” Paganelli says. “It’s a bunch of inside jokes, well, not just inside jokes, but things that happened to us there. That whole EP is a little story about that bar…a little Cheaters storyline, I guess.”

So what is it that makes bars so inspiring?

“I love bars,” Paganelli enthuses. “I was a bartender for like four years. We collectively love to drink. Love beers and whiskey. I live on 32nd and Matt and Lennon live on 35th so Cheaters is smack dab in the middle and that is our home base. I love bars! I love bar noise. I love meeting people and the social interaction you get at a bar. It is different than any other place.”

So get out there and go to a bar. You never know. You might even become inspired. As if you needed another reason to go out drinking…

Check out Horseneck as they blow the doors of the place at Blue Lamp in Sacramento alongside Armed for Apocalypse and Death Valley High on July 12, 2013. Horseneck’s EPs are available via iTunes. For more on the band, go check ‘em out at Facebook.com/horseneckmusic.