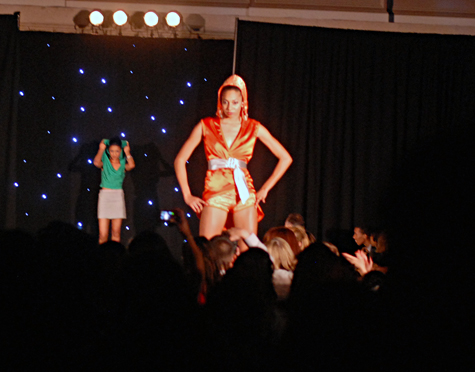 Sacramento’s fashionistas gathered last Friday for a hopeful glimpse into the future of fashion as the International Academy of Design & Technology featured a host of student designers in their annual Imagine Fashion Show. A colored presentation of mostly feminine pieces, mixed with some edge and balanced with decorative glamour, captured the essence of the night. With works generating a range of reactions—from excitement to blank looks to tears—it was definitely a night to remember. Nevertheless, it was, by far, one of the best fashion shows to see Sacramento in a while.

In the chic, neoclassical, festooned Sacramento Grand Ballroom, sophistication prevailed. A picture of elaborate 1920s architecture, the ceiling reached a whopping 124 feet with walls and floors enameled in luminous taupe marble. The astounding 20-foot windows rose up to a decorative gold leaf ceiling. Discovering all of the intricate nooks and crannies of the phenomenal space turned out to be a great pastime as the audience waited for the show’s host.

After her formal introduction, Camille McDonald, a former America’s Next Top Model contestant, failed to present herself for almost 10 minutes, creating an awkward show opener. When she finally appeared, her nose was held high in her predictable diva-like fashion. Luckily, thanks to a professional staff and an easy-going, dressed-to-impress crowd, all was forgotten by the close of the night.

Kicking off the show was a collaboration of 15 “emerging” designers. Models paraded down the runway, donning piece after piece. It was indeterminable which belonged to what designer, but overall the entourage of clothes was delightfully quirky and very creative.

Guests stared raptly at dresses adorned with ruffles and poufs, men’s peg-leg trousers and miniskirts coupled with billowy blouses. A crowd favorite was a sleek black mini dress embellished with swaths of black lace. It was a modern, unfussy approach. Fabrics ranged from drape-y silks to structured, form-fitting threads. The intermixing of soft, warm colors was an occasional relief from the blacks and grays that dominated the runway. With that said, the standout piece was a flattering black jumpsuit appearing comfortable and relaxed yet made with luxe fabrications. Despite a few misses, the collections showed authority and a great deal of hard work and focus.

The striking impression left by the first collection of designers counterbalanced McDonald’s boring intermission presentation. Fortunately, we were relieved for a few moments by keynote speaker Robert Best, a former Project Runway contestant. It’s too bad he had his microphone too close to his mouth, making it impossible to understand a word he said. Either way, anything was better than watching McDonald awkwardly read from her cue cards.

The highlight of the night came from the nine “Imagine” designers. While not every collection was a finessed display of craft and savoir-faire, it’s clear Sacramento is home to a handful of design protégés. First up, premiering an ambitious collection, were co-designers Tracey DeMercado and Yer Vang.

The jumpsuit was the centerpiece of the pair’s collection, showcasing the trend in various forms. Yellow ruched dresses were vented with exposed zippers and adorned with rope-like attachments draped over dresses and belted at the hips. Following the tasteful compilation was designer Carly Frazier with an ever-present zeitgeist of the 1950s. No detail was too small, from the derriere ruffles on dresses and bathing suits to the strategically selected shades of berry, peach, and then the accent blue. She eased it up with lightweight linens and a series of summery separates.

From there, some not-so-fascinating collections chock full of saturated colors, lackluster hoods, uninteresting jumpers and sequins, sequins and more sequins proceeded down the runway. The turning point came when the creativity of Paulette Maglasang took stage. Any sleepers in the audience were quickly awoken by roars from the crowd.

The senses were once more tantalized with the designs of Edward John Radanovich III. His use of bold colors, unpredictable browns and pleasantly bizarre patterns stretched down the runway. His gala of eveningwear successfully drew the eye to the stage, and made it the focus of a stylish collection.

It was a flamboyant portrait of local talent. Despite the love/hate relationship with some of the collections the standouts made it a worthwhile night out. Kudos to IADT for offering Sacramento a taste of what the fashion world has to look forward too.