I’ve Heard Paris Is Nice This Time of Year 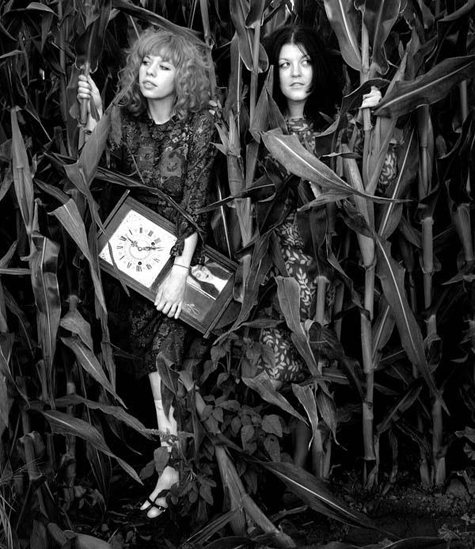 Some things were just meant to be. Listening to the music of Sacramento locals Agent Ribbons, you’d think the group had been together forever. There’s an almost preternatural chemistry between vocalist/guitarist Natalie Gordon’s warm, rich guitar tones, her equally resonant vocals and drummer Lauren Hess’s smoothly shuffling rhythms. However, Agent Ribbons have yet to enter their terrible twos (that’ll happen this coming March). In fact, before she met Hess, Gordon, who had been playing sporadic solo shows prior to her work with Agent Ribbons, seemed like she had run her course with performing music.

“After hitting a dead end in songwriting around then, I sold my guitars and didn’t play for a year,” Gordon explained over a brief e-mail correspondence. “Meeting Lauren was a turning point for me and brought invention and inspiration back into process of writing music, and from there we developed a symbiotic approach to the music we create.”

Was it fate? Maybe. But it’s probably best not to overanalyze. What makes Agent Ribbons’ music so engaging is its enchanting simplicity. Gordon took the time from her busy schedule as an employee in an “independent sweat shop” to answer a few of Submerge‘s questions via the mystical strands of the World Wide Web.

I’d read in an older interview that you (or had) lived in a Victorian home. Listening to your music, I got the sense that it had a nostalgic quality to it. Are you a history buff, and if so, what period of history holds the most interest for you?
I was an art history major during my brief stint with scholarly pursuits. I do prefer historical fiction and biographies over most genres…one of my favorite books is called The Fall of Madame X and almost entirely because of my fascination with that story I think I’d like to be in Paris in the 1880s. It’s such a romantic time and place to be in, but probably only for the rich.

Do you and Lauren still inhabit different apartments in the same building?
Lauren lives in the flat below in our building, though half the time she lives in San Francisco where she is employed in a bead shop.

In your first e-mail to me, you’d mentioned that you had a hectic schedule due to your new job. Does work stress affect how you write songs or what you choose to write about?
Actually, having structure and repetition really helps my creative process. Almost all our songs were written whilst riding in the back of a car, on long walks through downtown or ironing because I drift into that space when I’m bored or have the freedom to daydream. Right now, I’m working as the assistant to a corset maker, though I like to tell people that I work for an “independent sweat shop.” Anyway, corset making demands an attention to detail, so I write when I get home.

Reading the lyrics for a couple of your songs on your SonicBids page, it seems that your lyrics are character-driven. Would you say that’s a fair assessment? If so, where do you find inspiration for these characters?
Most of the songs tell stories instead of convey only ideas, I guess. And a good story relies on strong and memorable characters, so I spend a lot of time developing that aspect, almost unselfconciously. Most of the stories I come up with are a hybrid of personal experience and either movies or books. The space I am in when watching a film or reading—especially escapist-type stuff—is the place I’m in while songwriting. So I draw much of my inspiration from movie theaters, but create my own plot and characters, but much of the song is emotionally drawn from actual life.

I saw that your 7-inch, And the Star-Crossed Doppelganger, had a cover drawn by Dame Darcy. How did you meet up with her, and what was it like working with her?
She happened to be on tour with her own band, Death by Doll, and so we asked her to play at our CD release party when she came to the area. She actually stayed in my room for a couple days and I was a bit breathtaken for all of the first day. However, after realizing how fun and dorky she was, it evolved into more of a friendship and she let us stay with her when we came to Los Angeles. We were so honored to work with her on the 7-inch and she seemed very pleased to do it!

Had you been a fan of her work and comics prior? Are you a regular reader of comic books in general (I am, so I won’t make fun of you for saying yes)?
I would not consider myself a comic book fan in general, but I have been reading Dame Darcy for years and was a fan of her solo music before even that. Having once dated the owner of a comic book store for a while, I took on a greater appreciation for comic books. However, I hardly read any. I still haven’t finished Fables [published by DC/Vertigo], which I love so far, but I have finished The Lost Girls by Alan Moore.

I also saw that you’d handcrafted album covers of your album On Time Travel and Romance prior to having the artwork version. You also make band merchandise like jewelry. Is this something you hope to keep doing and has this affected your own appreciation of the group?
Making things by hand for the band is a total blast, but unfortunately, very tedious and time-consuming. After having made 800 handmade CD covers, we started to only feature them once in a while when we have time to make them. We have printed artwork now that we are very excited about that was illustrated by a French artist, Marie Caudry.

You released a full-length album. Are you working on another album now? If so, what direction do you see your songwriting heading?
There is no specific plan for the next album, but we are certainly working on new material. Hopefully we might have something out in the beginning of 2009.