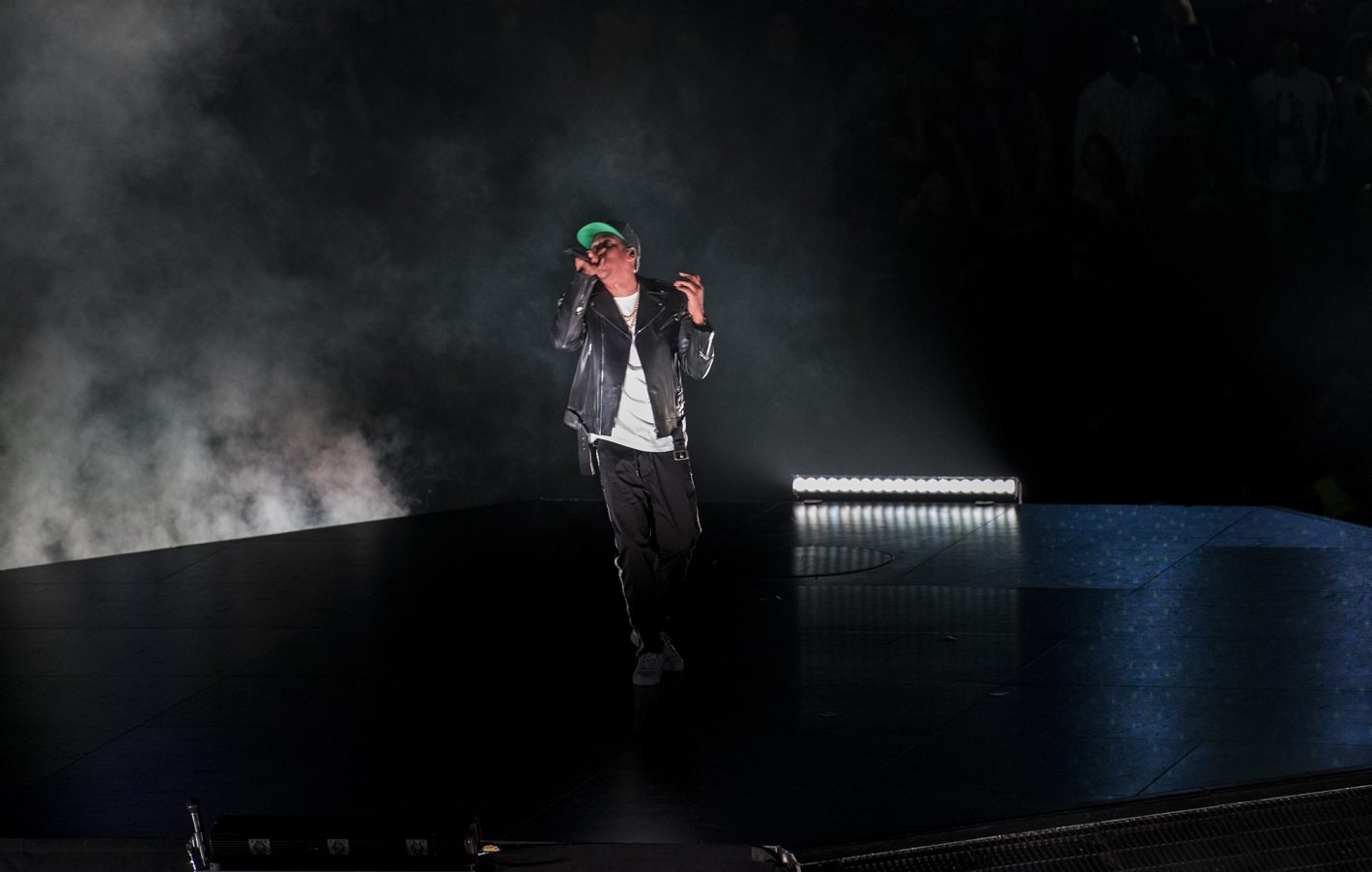 We’re inside the Golden 1 Center, downtown Sacramento’s gargantuan postmodern beacon designed for tempting the titans of celebrity down from the mothership to pull an earthly audience into a liminal space of awe and forced perspective—somewhere between a circus maximus and a Seaworld for celebrity encounters. It takes a particularly deft performer to collapse the distance to provide the sort of intimacy one might expect from a block party or mid-sized theater. Sidestepping the risk of becoming stuck inside a Kafkaesque trap of ostentation (see: Kanye’s floating nightmare last year), Jay-Z wears his surroundings with confidence and nonchalance, powering through 30-plus songs from 20-plus years and setting the perfect example of what an elder statesman rockstar of hip-hop can deliver. 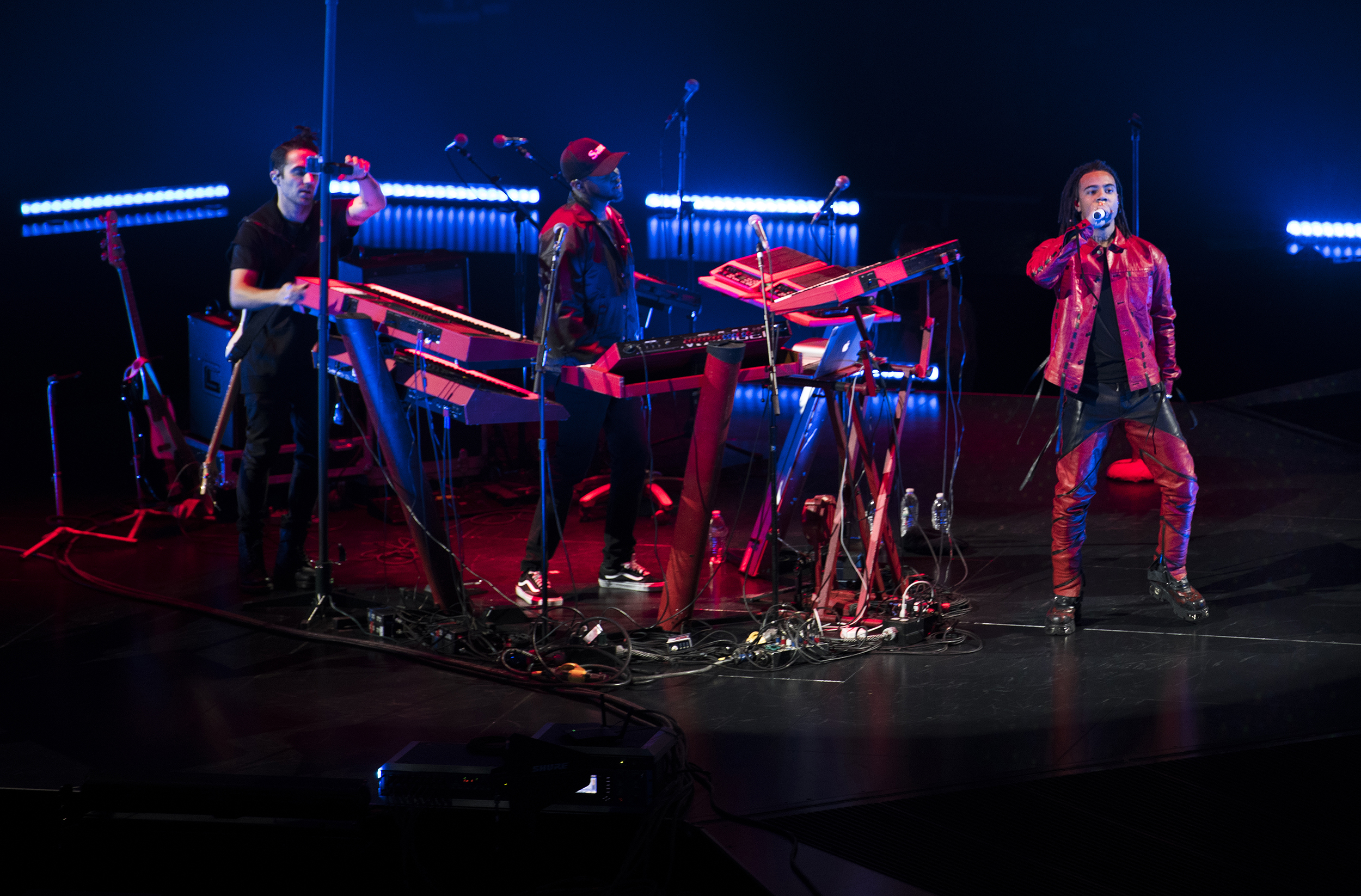 The 4:44 tour features an apt pairing act for Hova in the form of Chicagoan Vic Mensa, hot on the heels of his own revealing “blueprint,” The Autobiography, which dropped mid-summer. Though at Mensa’s age, a fledgling Jay was just starting to make his presence known on cuts by Big Daddy Kane, the up-and-coming 24-year-old fits like a puzzle piece alongside the older, more established rapper’s history of achievements. Backed up by a multi-instrumentalist duo on keyboards, guitars and drums from a “pod” in the center of the stage, Mensa slams through a wall-to-wall set of solid hits (surprisingly, with one album, a few EPs and a mixtape to choose from). Bouncing around the stage decked out like a red flare, he is tonight’s conduit to the current generation of MCs: politically engaged (“16 Shots”), emotionally open (“We Could Be Free”) and melodically inclined (“Rollin’ Like a Stoner”).

The thematic blood running through most 4:44 shows is the leaving of legacies and the act of waking up, or being woken up, as it turns out. The story behind the emotionally scourging title track of Jay-Z’s latest album (referencing the exact minute his clock read when he woke up to write his heart into the song) is about the urgent call from the ether one gets somewhere around middle age that demands to know what legacy you’ll leave behind—for your children, for your world. Jay-Z has had several serious wake-up calls in the past few years that have changed his relationships—to his wife, his children, to his storied career and to the image that built the mountain on which he now stands. While there is no way he could abandon the songs that fueled his rise like “99 Problems” and “Big Pimpin’,” Jay succeeds in strategically distancing these crowd-igniting tracks from his more redemptive, reflective material. 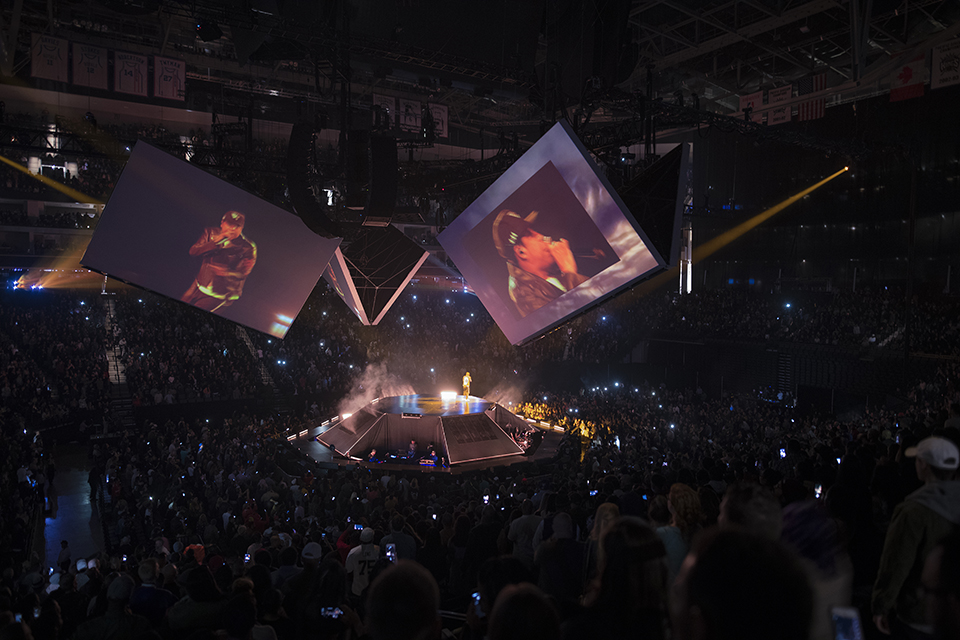 There’s an element of rebirth in the show as, on a series of monolithic screens vertically shielding the stage, Jay’s visage slowly catches fire, starting with the massive gold chain around his neck. During this segment, one runs the danger of getting hypnotized by the burning pits of his eyes as they smolder away for what seems like ages. As the Orwellian monitors move away up toward the ceiling, the man arrives, out of the ashes of self-made destruction, ready to take aim at his ego with high-energy set opener “Kill Jay-Z.” With his band carefully hidden in recesses in the middle of the stage, he takes on the weight of an arena’s focus with ease, strongest as always in solo form.

It helps that the 4:44 material is catchy and good enough to take up a good 25 percent of the setlist; but more than that, the new songs lend themselves to a more stripped-back, one-on-one style production, as nearest to rap’s function as can possibly be, letting the man speak for himself about his mistakes and his triumphs. 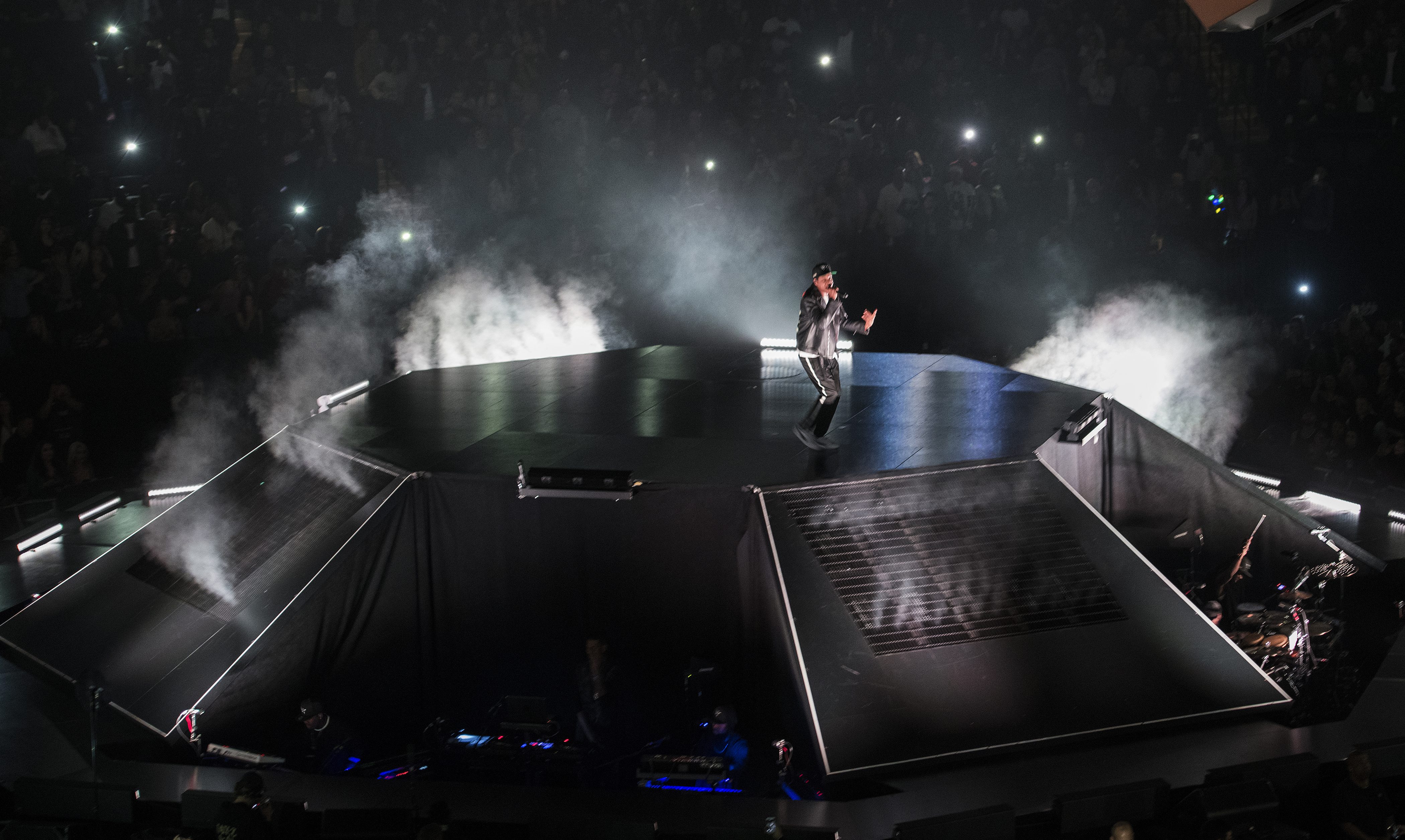 Almost every other album in his discography gets a few songs’ representation (excluding American Gangster), with a notable extra few from 2003’s Black Album, which brought the curtain down on another era of Jay-Z’s career. Only in 2017, the question of that career’s longevity has long since been solved. He holds in his hands one of the game’s deepest and most accomplished discographies, and can more than satisfy any audience goer’s tastes. Favorites “Empire State of Mind” and “Hard Knock Life” get a sea of smiling faces and phone screens swaying, followed by the sweetest track off the new album, “Smile.”

The night ends with an encore of special gravitas, a cover/mashup of Linkin Park’s “Numb” from a compilation Jay did a decade before. Here, a few off-the-cuff musings about Chester Bennington and the divergent relationships that happiness and success can take in a person’s inner life provide one of the most moving moments of the night.

For an artist who can comfortably wear the mantle of legend and everyman interchangeably, who promotes prosperity while avoiding crass display, who has straddled several eras of hip-hop without letting his image slip away from him, tonight is typical. For the fans, it is a phenomenon, with not a note out of place. Leave it to a professional. 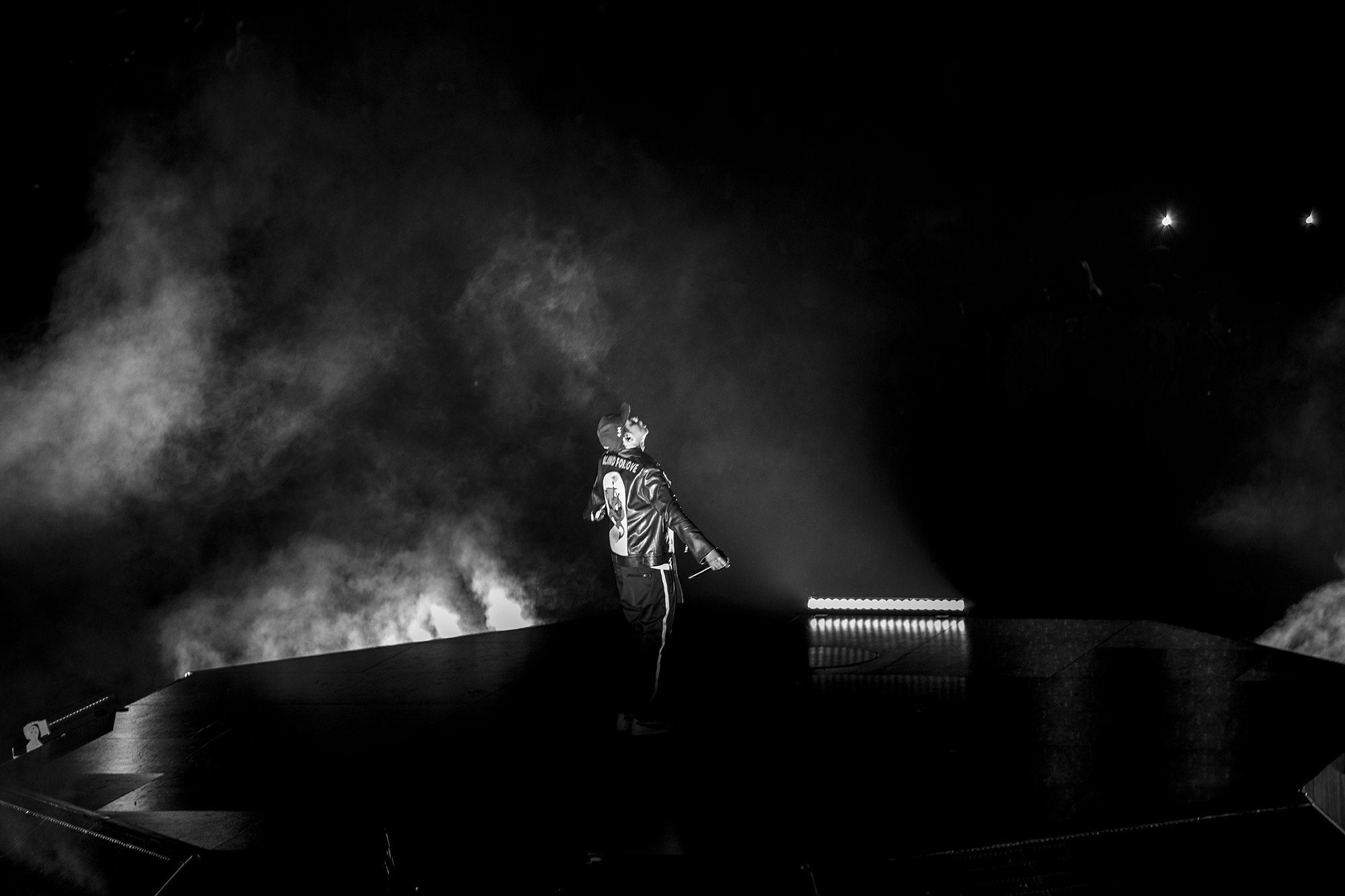