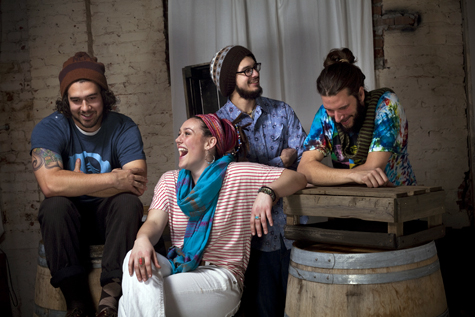 Jesi Naomi finishes up her first album with The Trippers

For Jesi Naomi, energy is everything. If you focus your energy on the things you desire, and release that energy out into the world, you will attract the things you want in life.

So once she had her mind set on playing music back in 2009, she took some advice from her aunt. She began telling everyone she knew that she was going to become a musician.

Next thing you know, the singer/songwriter was singing ballads at Capitol Garage. Then she met local indie band Bell Boys at Fox and Goose downtown during an open mic night, and they helped her learn the tricks of self-promotion. Later she met local jam band ZuhG, of which she is now a member.

When Naomi is playing solo, ZuhG members JR Halliday, Bryan Nichols and Kevin Martinez comprise her backup band, altogether as Jesi Naomi and the Trippers. In March she will go on a two-month “For the Love of Music” tour, performing both in ZuhG and as a solo artist.

Two years into the music scene, the 24-year-old is now preparing for Jesi Naomi and the Trippers’ debut album, Earplay, to be released in January.

Earplay is seven tracks of blues and soul combined with psychedelic nuances and djembe, saxophone and ukulele thrown into the mix. It was recorded in the span of around three months by Joe Johnston at Pus Cavern.

The album opens with “Kosen Rufu,” which is the title of both the intro and outro tracks. It is also a guiding theme of the album. Broadly defined, it is world peace through individual happiness, a concept stemming from Buddhism. As a practicing Nichiren Buddhist, this concept is paramount for Naomi.

“[Kosen Rufu] is world peace by making each person have their individual peace,” she explains.

Certainly this applies to the song “Change Train,” which Naomi wrote for her mother, who was an alcoholic.

Her mother’s attention was constantly split between her children and the bottle, and Naomi remembers thinking, “If I write this song, I want her to find her change train. If I sing this song as many times as I can, she’ll get better.”

A year later, after performing the song show after show, her mom told her she had gone sober.

Though school had never been Naomi’s thing, it is what brought the Chico, Calif., native here to Sacramento. Naomi thought she was going to make music videos for a living. She was enrolled at Sacramento State as a media/marketing major.

Yet reading, comprehension, spelling, memorizing was the sort of thing she felt detached from. Whenever she hit a burn out point, she would think to herself, “Forget this. I’m gonna go paint.” Up to this point, painting had been her artistic release.

But somewhere along the way she discovered the pianos in the music rooms at school. Then a guy by the name of Richard Martin started listening in on her practicing piano and pushed her to learn scales.

“That’s where it all started,” she remembers. “I just needed a little direction.”

That Christmas her younger brother taught her how to play the guitar, something she thought she would never be able to do, mostly because the thought of memorization intimidated her. But memory is just a muscle, she can now say with confidence, and what’s more important than memorization is feeling the music. And she has come to realize that she’s got music coursing through her veins.

“Music is in my blood,” she says earnestly.

You could say Naomi is following in her father’s footsteps. He played drums in a band called Pole Cats back in the day and went on tour when she was still in her mother’s belly. Though he’s no longer in a band, he played drums on the track “Hold Me Nice” on Earplay. It is the first song Naomi ever wrote, back when she was learning how to play piano.

She often catches people by surprise when she reminds them that it’s only been two years since she started playing music.

“There’s no better way to learn than to just get thrown into the deep end and hope to swim,” she laughs.

Yet when she is performing it is as though she’s been a musician on a stage all her life, as though that is where she is meant to be. She wields a sense of confidence and power that is hard to come by in a performer.

Offstage Naomi is warm and easygoing. Sitting in the practice space behind the ZuhG Life store, she sips on Earl Grey tea and speaks effortlessly about her music in a conversation that lasts a good 45 minutes. She wears an enchanting smile on her face and responds coolly in a bluesy tone.

Make no mistake that this is a woman with self-respect.

In a way, Naomi says, women have it easier in the music world because they are more marketable. The notion is that they just have to look good.

“That in turn makes it harder for a woman to really put out her true soul,” she says.

“I’m not going to go up there and wear some skanky outfit and not know what I’m singing,” she continues. “I want the music to shine, that’s pure beauty to me.”

Still, she’s been approached by the occasional creep for the wrong reasons.

There was one, she recalls, who made himself out to be the big-time producer who would get her work noticed.

“I thought I was going in to make a demo tape, [but] it wasn’t like that,” she says. “Thank God my mom raised me to know about those kinds of things.”

She went her separate way, with her mind in one place. It’s all for the love of music.

And despite the few exceptions, Naomi says she’s received a wealth of support from her male colleagues.

“I feel like I get a lot of respect being a [female musician], especially if I respect myself,” she says.

If that is the energy Naomi puts out into the universe, certainly that’s what she’ll receive. 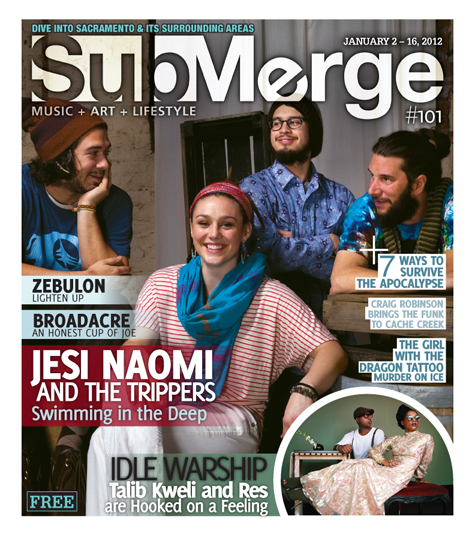 Jesi Naomi and the Trippers will be putting forth positive energy at Marilyn’s on K Jan. 7, 2012 when they celebrate the release of Earplay, a seven-song EP. There will be a $10 cover, which will include a copy of the CD. Also playing will be Brad Relf, The Bell Boys, James Cavern and Monkey Flower. Show starts at 8 p.m.