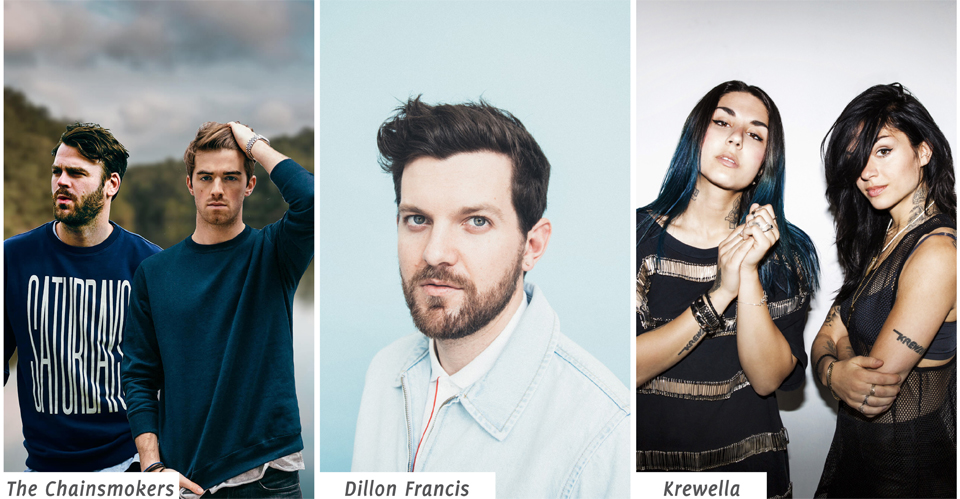 This winter’s concert schedule in Sacramento is STACKED! Kick off the season in style at 107.9 The End’s Jingle Ball 2016, presented in partnership with Midnite Events on Friday, Dec. 2 inside the Pavilion at Cal Expo. Headlining will be the chart-topping, hit-making DJ duo known as The Chainsmokers, whose career catapulted after the release of their tongue-in-cheek track “#Selfie” in early 2014. Since then, the NYC-based artists have released hot track after hot track, netting near constant airplay (see the song “Closer” featuring singer Halsey as an example, that song is freaking everywhere). Also on the Jingle Ball lineup is Dillon Francis, a super popular DJ, producer and internet celebrity from Los Angeles and Krewella, another legit electronic dance music duo consisting of Pakistani-American sisters Jahan and Yasmine Yousaf. All three of these acts are festival headliners, so to see them together on one bill in Sacramento is exciting for any fan of dance music. Opening Jingle Ball will be Alexx Adam, Billy Lane and Nick G. Tickets start at $50 and are available at Sacjingleball.com (and if you’re balling out of control you could even spring for the $2,500 “elevated cabana” for you and five friends; it even includes “complimentary snacks” and “fun surprises!”). This event is 18-plus and the doors will open at 8 p.m.

**UPDATE: Hopefully you got your tickets early because this show has already sold-out!**