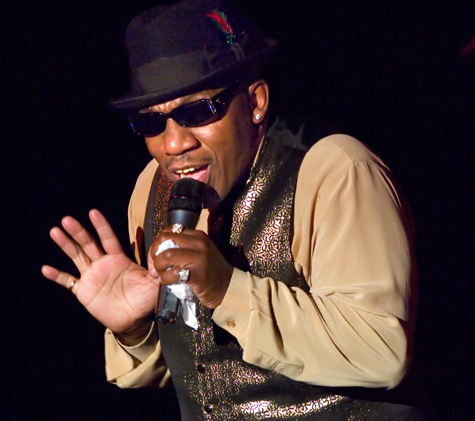 Taking up the family business may seem like the logical step for any child of a successful parent. However, there are some pitfalls of embarking upon this path. For example, is it even possible to forge your own identity, or are you doomed to be compared to who came before? It’s a challenge that John Lee Hooker Jr. has taken on headfirst throughout his career.

Son of the late, great Delta bluesman John Lee Hooker, the junior bluesman himself has had a long and storied journey through his career, though it hasn’t been the smoothest ride. He began performing music as a child, and by his teens, he was on the road touring and recording with his legendary father.

Drugs, alcohol, divorce and imprisonment derailed a promising career for a long time. But faith helped resurrect him, and in 2004, in his early 50s, he released his first album, Blues with a Vengeance, which was nominated for a Grammy. Three albums followed–studio releases Cold As Ice and another Grammy nominee All Odds Against Me and 2010’s Live in Istanbul, Turkey.

Speaking with Hooker Jr., it’s clear that even at age 60, he’s as exuberant as his music, old school blues infused with a modern R&B swagger. He attributes this to God, exercise and a healthy lifestyle (he even proudly boasts that he graced the cover of Healthy Living Magazine). Also, it’s the music that keeps him vibrant. Even after all this time as a performer, he says he still is able to experience new things.

“There’s always something that you haven’t experienced,” he says.

In February 2012, he and his band played the Mahindra Blues Festival in Mumbai, India. Visiting the country and performing there was a new experience.

“What an experience,” he recalls. “It was something that’s a lifetime experience. Something you’d normally see in documentaries or in the newspaper, and you fantasize or imagine about it, but we were actually there. The people were the kindest people I’ve ever met. The culture is so unique and hospitable. I can’t describe it but to say it was awesome. It was really awesome.”

It’s clear that Hooker Jr. is not done yet. In April, he plans to release his fourth studio album, which he said would be titled All Hooked Up. The album will feature Lucky Peterson, Joe Louis Walker and others.

“We’re just going to have a good time, because I’m all hooked up with my friends,” he says over the phone from Colorado.

In the following interview, the bluesman shines a little light on to his writing process and tells us why riding trains in Europe sparks his creativity.

I was listening to your most recent studio album All Odds Against Me today. I’d read on your website that this was the first time you recorded an album without covering one of your late father’s songs. Was that a difficult decision for you to make?
I mean, you know, it wasn’t a big effort to not do any of his music. I do what I feel, and if I feel that that’s what I want to do, then that’s what I want to do. On a couple CDs, that’s what I felt that I wanted to do–pay tribute to my dad. There are other ways that I pay tribute to him. Some would think that I wanted to stop the critics. “You’re always covering…” I didn’t want to stop the critics; that’s just the way I felt. The next album that will be released in April, that doesn’t have my dad in it either. It’s just how you feel.

Is that a crowd favorite when you play it live?
Yeah, we’re playing that every show. People look at the back of those CDs, and they say, “Where’s that Dear John? Where’s that letter your wife wrote you?”

It seems so intensely personal. Is that a song that you really connect with when you’re performing it?
I connect with all my songs, but it’s a crowd attractor. People really listen to that letter, as soon as that band hits, breaks down and it says “Dear John,” people’s ears stretch out, because they really want to hear what she said while he was in jail. “Dear John.” If you don’t say anything else but “Dear John,” you have people being quiet.

Can you put into words what inspires you to write when you’re in Europe on the train?
I’m in outer space, in my own outer space. There’s no one there but me. I don’t have any worries of family. I don’t have any worries or concerns of band members or friends, it’s just me and the music. The music is something that’s being translated from one entity into my consciousness, and I just go [laughs].

I’m in my own little space bubble. I really mean that. I’m in my own little space bubble, and everything is locked out. Europeans are very quiet, very quiet. I don’t have any noise. They don’t bother me, and I don’t bother them… I shouldn’t have said “bothered.” Everyone’s just quiet, and I’m just able to do my thing. If I was in America on the train, it would be, “Did you see that game last night? Oh, the Bulls are going to beat them. Oh, the San Francisco 49ers.” And babies crying, “Waaaah,” but not over there. Not over there. So that’s where I do my thing. I wrote another Grammy-nominated CD over in Europe, and that was All Odds Against Me.

John Lee Hooker Jr. will play the Torch Club, which he calls one of his favorite places to play, on March 10, 2012. Go to Torchclub.net for more details. If you’d like to keep abreast on the release of All Hooked Up, tune your browser ito Johnleehookerjr.com.