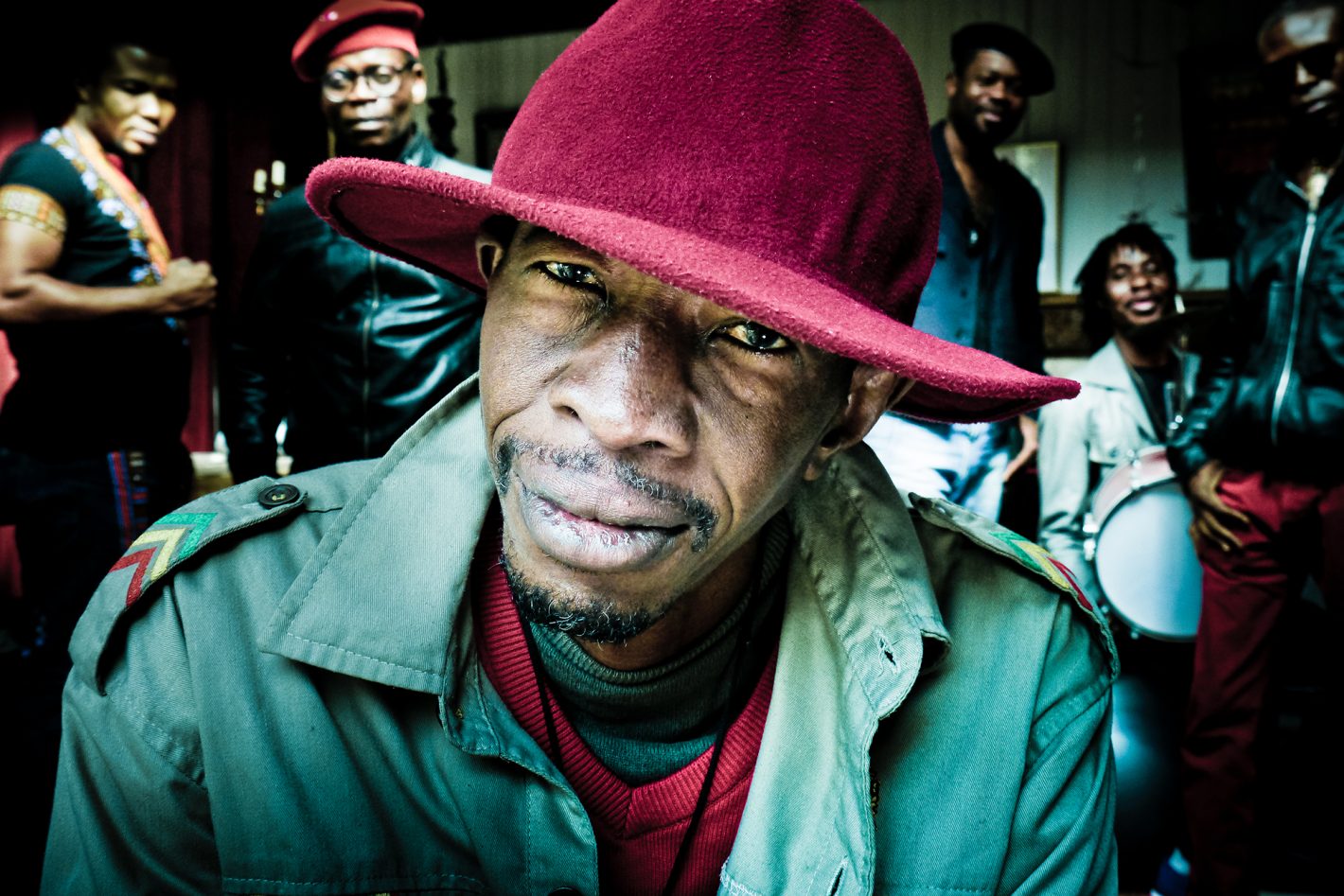 Jean-Pierre “Jupiter” Bokondji is, as he will tell you, a curious man. Born not long after the Democratic Republic of Congo (DRC)’s independence, Bokondji was raised as the son of a diplomat—spending much of his youth between Tanzania and divided Germany. He was destined to be educated in Europe, to either rise up the political network in his country as a leader, or—like many—to leave Africa behind altogether for a theoretically better life elsewhere. The possibility that he would reject all of this, and instead dedicate his life to the street music of the sprawling, destitute Congolese capital of Kinshasa, was unthinkable. And so, as a young man, he was thrown out of his father’s house.

He was destined, then, to be a man of his own invention.

If Europe had offered Bokondji anything, it was a glimpse of Africa through a prism. The land to the north could be just as provincial as anywhere else. He recalls being seen as a curiosity by schoolchildren in East Berlin, being struck with the irony that, while he was free to travel to either side of the wall separating two worlds, those who gawked and pointed were the true oddities, sealed off in a socialist bubble. But Europe was also the crossroads through which he encountered American soul and funk records. By the time he returned home, he realized that, within all the songs and rhythms he’d heard abroad, he could hear a raw, untapped form in the music of his own country. From then on, he would spend his life as close as possible to this beating, musical heart of the world.

The fantastic 2006 documentary La Danse de Jupiter might be the best introduction into understanding Bokondji’s undying love for Kinshasa, with its chronic power outages and decidedly un-peaceful transitions of government power. Between performances by Jupiter and his longest-running band, Okwess International, it shows a vibrant, inventive metropolis making the best of things while stuck between the gears of history and politics. There are no breathtaking vistas here—Kinshasa is not a place to look at; you must listen for it, as Bokondji says, in the endless combinations of music styles encountered from one street corner to the next. There are more than 400 ethnic groups residing here from every corner of the Congolese interior, each with their own language and rhythm particular to their culture. For Jupiter, their artistry is the true wealth of the land—far more valuable than the physical resources for which so many have suffered, and with so little to show for it.

Jupiter and Okwess have gone truly international in the years since La Danse was released; a 2012 tour in support of the London Olympics, in which dozens of musicians from around Africa and the United Kingdom collaborated, sparked new connections and interest in the band, leading to their debut album release, Hotel Univers (2013), a spot at Glastonbury that same year, another world tour, and this year’s international release of their second album, Kin Sonic.

While no recording could contain the dynamic and immediate power of Okwess, the albums are still triumphant, documenting a band at the top of their game after nearly three decades of existence. Kin Sonic, while having star guest spots from the likes of Damon Albarn (of Blur) and Robert Del Naja (of Massive Attack, who supplied the cover art), is most of all a distillation of Jupiter’s primary concerns: elevating and showcasing the teeming cultural mix of Kinshasa (almost every song on the record is sung in a different language) and pushing forward the spirit of “bofenia rock” (a fusion of Congolese popular music, native rhythms and Western rock). The record is filled with timely messages, but like the best African proverbs, it does not speak truth directly to power, but dispenses its urgent messages inside universal truths.

It is this universality that gave Jupiter the foresight to continue when he was thought of as a fool and a dreamer for pursuing music. Unlike other natural resources, music can travel long distances without losing the character of where it came from; it bridges divides that cannot be crossed by boat or plane; it makes one wealthy in more ways than one.

On Thursday, Oct. 18, 2018, Jupiter and Okwess will bridge the distance from Kinshasa to Sacramento with what’s sure to be an amazing set at Harlow’s. We were able to get a few words (translated, by phone) from Jupiter himself.

You’ve talked about how many people in Kinshasa don’t see native music or music of the streets as a great form of wealth for the Congo. Now that you have released two albums, toured the world and collaborated with big global artists in the years since then, are more people recognizing the potential of the music? How do people treat you/view you back home now?
Yes, more people understand my approach that has lasted more than 30 years, trying to open their ears. Now there is a new generation looking up to me. When I go home, I am more respectfully considered.

You’ve talked about listening to Western music, music from all around the world, and hearing the music of the Congo in its DNA. When was the first time in your life that you realized how much influence African music had, and how did that change you?
I realized that traditional music was the basis of world music when I returned to the Congo in the 1980s, listening to the traditional music in its raw state. This made a rebel of me, and it pushed me to explore more and expose it and to my fellow citizens who did not know it.

It’s rare for someone to gain fame and retain their love and commitment to their home and their roots as you have with Kinshasa. What advice do you have to people who would stay home, support and build up the music and the people where they live?
[Fame is mean]. If you put it in your head, it’s negative. The only advice is that you have to stay yourself and natural.

Many people don’t know about the election in DRC coming up at the end of this year. With half of the country younger than 25, is there a sense that young people will soon begin to change things in the country? Is there more optimism or pessimism for the next generation?
There is always optimism for the next generation, and especially if the multinationals leave us in peace and collaborate equitably without corrupting governance.

For most people in the places you tour, your concert will be the closest they come to experiencing Kinshasa. What is the most important thing you would want to communicate to the global audiences you perform for?
By the vibration and the rhythm, we try to relieve the stress of the people, and that brings us closer. Because of the language barrier, it is especially in this way that we joyfully and positively communicate the energy we bring from Kinshasa.

Much of the songs on Kin Sonic have lyrics in different languages from the peoples of the Congo; What changes each time when expressing your music in another language? What are the common things that connect all of these people’s music?
Each language helps to give us a melody; each language has its own characteristic music. We try to go from one to the other to create our own style that I call “bofenia rock.”

What is next for Jupiter and Okwess?
We want to continue to explore this inexhaustible music, then we just open the door for the next generation.

You do not want to miss Jupiter and Okwess as they take the stage at Harlows (2708 J St.) Thursday, Oct. 18, 2018. Opening the show is The Jack Moves. Tickets are $20 and available by visiting Harlows.com. Doors open at 7 p.m. and show starts at 8 p.m. 21 and over. For more information on Jupiter and Okwess’s music, visit Jupiterandokwess.com.