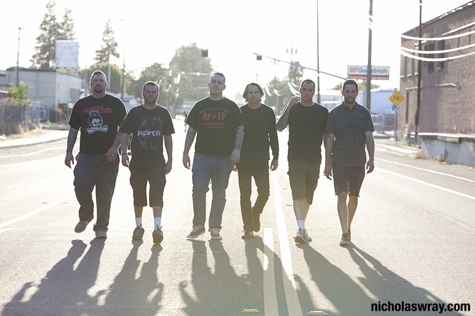 Kill the Precedent load up with a new EP

Industrial metal might conjure images of military-like precision with perhaps a totalitarian-style frontman at its controls. Kill the Precedent certainly evokes those images with their music. Thundering beats–both live and electronic–blast behind thrashing riffs and the two-pronged vocal attack of Twig the Exfoliator and The Ugly American. However, speaking with the two vocalists in a recent interview, the guys seemed jovial, bordering on jolly. For instance, if you were to call The Ugly American’s cell phone, you might hear The Dead Kennedys’ classic “California Uber Alles” playing while you waited for him to answer your phone. He said that since Jerry Brown was re-elected as governor, it seemed appropriate. “It’s such a fucking mess out here,” he quipped. “I thought it was pretty damn funny. At least it’s not an actor.” If KTP was indeed an army, in demeanor, they’d be more akin to the cool jokesters from Stripes than the cold-blooded killers of Full Metal Jacket.

Make no mistake, though; the band’s music is a no-holds-barred aural assault. KTP is ready to release a new EP, Stories of Science and Fantasy, which will consist of six original songs and two covers (The Smiths’ “Death of a Disco Dancer” and Jessica Lea Mayfield’s “We’ve Never Lied,” which Twig says was recorded in a hotel room in Oakland). Evoking the days when bands like Ministry and KMFDM crashed mainstream rock’s party, songs such as “Questions for Weapons” wield an imposing arsenal or metal riffs and huge beats, courtesy of electronic beatsmith/guitarist Hamburger, guitarist Killsbury and drummer Sgt. Pepper, while “Free Reign” is a throbbing, almost dance-y track highlighted by Jon the Jew’s pummeling bass line and an underlying, monolithic electronic groove.

Members of the band are no strangers to the Sacramento rock scene. They have played in bands such as Red Tape, Diseptikons and Rivithead in the past, but Kill the Precedent started as a side project of The Ugly American and Hamburger.

“Hamburger and I got together in 2006 and started screwing around with the drum machine,” The Ugly American explained. “We were kind of doing a little Big Black kind of deal, just having some fun. We recorded some music and got a hold of Twig, and I said, ‘I got to record some vocals, can you come down and help me out?’ We recorded vocals. Twig and I had been friends for many years, and he was giving me this blank stare, so I was like, ‘OK, you didn’t like it, but thanks for coming down and recording.’ And he said, ‘No, I want in. I’m fucking in.’ He took over from there.”

Twig’s introduction to the band was through the song “Cop Out,” which will appear on Stories of Science and Fantasy. More songs were started, but Twig said they were left unfinished. As each new member of the band became a permanent fixture, the songs began to flesh out.

“I wanted Killsbury to put a guitar riff over that–just that one song [“Cop Out”],” Twig said. “I’ve been in bands with all these other people in Red Tape and Diseptikons, and I was like just do this one song, but then it became do this song and that song…and eventually that’s how each member has come to be in the band.”

For The Ugly American, Kill the Precedent became a way of rediscovering the music he loved to make in the late ‘80s and early ‘90s with bands such as Rivithead and Battalion 53 after years of playing in punk bands.

“It dawned on me that I really missed that shit,” he said. “It was powerful, it was fun, it was endless. You could do whatever you want and get away with a hell of a lot more.”

In the following interview, KTP’s two vocalists fill us in on the making of the forthcoming EP and what draws them to making this kind of music. We find out that the reason why the harsh-sounding vocalists are so jovial is because they’re playing music they actually love.

It seems like industrial is a genre of music that’s gone back underground. Is that part of the excitement of revisiting it?
The Ugly American: Kind of, but not really. There’s no denying that those bands have had an influence. It’s obvious–and it should. It’s fucking awesome music… I can just say I missed the power of it.
Twig the Exfoliator: I liked the freedom of it. When we first started jamming around, with Jeremy from the Snobs, the bass player, was doing a bunch of electronic beats and me and [Ugly] would sing over it. It wasn’t hip-hop singing, but it was like a Fugazi overlay over dance music. I definitely wanted to not do just Ministry type stuff, but I wanted some melody in there to make it a bit different.

Listening to the music, you can definitely hear that sort of punk-type melodies.
Twig: Whatever [Hamburger] makes up beatwise and gives to us, half of them could be more on the dance side, some of them are more hard and fast, or slow and driving. If we hear something that we like, we’ll get working on that. Part of the reason why I wanted to do this was because I didn’t want to work with drummers anymore [laughs]. I was mad at all the drummers I’ve ever played with, and they take too long to set up. I was sick of loading all their shit into my van. That was the original idea, “Oh, we do whatever. We don’t need a drummer. Be like a hip-hop band, just plug in an iPod and do it like that.” That’s the way I wanted to do it. I wanted to put on a big production of a show, but within our budget.
Ugly: When Twig was on tour with Hoods–I think they were in Europe. He was adamant about it. He was like, “No drummers. I don’t want any fucking drummers.” Before we even put a drummer in there, I wanted one, because I wanted to add to the power and the beats and make it sound as large as we could. But he was all, “Hell no, we’re not doing it.” So, he goes to Europe and we grabbed our old buddy [Sgt.] Pepper. We brought him in to practice while Twig was gone. When he got back, he showed up for practice, and we were like, “Oh look, it’s…Pepper.” He was like, “You dick.” [Laughs.]
Twig: [Laughs] But it worked out.

Twig, you said you came in and did the middle section of “Cop Out,” but after doing that you wanted in. What drew you to this project?
Twig: I wanted to do something different. I wanted to do drum machines and just sample stuff by myself, but I’m completely computer illiterate. I don’t know how to do any of that stuff, and I couldn’t get anyone to do it. I talked to [Ugly], and they were already doing it for a couple of months, so I went in to record with them. The beats were big and huge, and it was something different. Since he let me even try something, and I could overlay a couple different vocal layers, and me and Sean could go back and forth instead of having to write a song’s lyrics all by ourselves–and you know, run out of breath–it made it better that we could share the vocal part. I liked that. I liked who he was working with, because I had known [Hamburger] from Rivithead and Battalion 53. We were also working with Evan at that point, Tha Fruitbat.

It seems like everyone who has come into the project has left their own stamp on it. Is that how the songwriting goes or do you start with the beats and go on from there?
Twig: Hamburger does all the beats and stuff. He’ll do two different parts with maybe some guitar, because he plays guitar too. He’ll just send us two-minute loops so we can get an idea about it. Then usually we will come up with singing structures, and then we’ll leave it alone. We won’t finish anything, and then we’ll bring it to practice and everyone else will listen to it and have their input. We start arranging the songs from there, cutting out parts, changing the drum beats, adding different parts, then we actually start writing the songs, the lyrics and stuff.
Ugly: It goes in reverse. It’s not the typical way you write a song, but it’s totally working for us.
Twig: Everyone’s really busy, so it’s all sent over the computer. Hamburger will send the beats to us, and we’ll pick the ones we like–the whole band will. And we’ll just work on it from there.

A lot of the bands we were talking about as influences before are largely associated with one guy, like Al Jourgensen for example, but it sounds like you guys actually play the songs to write them, which I think is kind of interesting for industrial music.
Twig: It’s like any other band. We’ll start arguing…but it all works out in the end as long as no one’s picky and tries to be the highlight of the song. Everyone knows their place.
Ugly: There are no egos, arrogance or bullshit. I know this sounds hokey, but it’s a completely collective effort. Everyone has their say. Like Twig says, we’ll argue to friggin’ death over it, but everybody’s got their two cents, and it just keeps piling things on without making it too much. It’s one cool idea after the other. It’s fun. I think the biggest thing is just that it’s a hell of a lot of fun.

I’ve seen that you guys have had girls in costume dancing at the shows, people covered in blood, synching up videos to your songs. Is that something you get together and collaborate on?
Twig: [Killsbury] handles most of the video stuff. He takes a while to get it with the beats and intros to every song. Except for [Hamburger], none of us are that great with computers. To do all that is a bit of a learning experience. And we don’t do it the way we should. We’re rolling into shows with DVD players and stuff, and a projector from like 1992.
Ugly: We try to change it up every time if we can. We did a good run, if you don’t mind me saying, at Blue Lamp. We called it “Cocaine Drug Dealers” or “Colombian Drug Dealers.” Everyone in the band was dressed up in cammo and we were dressed up in white suits. I filled up a bunch of baggies with flour. It was a great show, but it was the stupidest thing I ever did. Twig and I started throwing these bags of flour out into the audience and hit a fan. It went everywhere. Everyone was covered. I got off stage, and the guy was like, “It’s going to be $450 to clean up the place.”
Twig: It’s kind of like having sheet rock down or something. You can’t get rid of it… All the bottles were covered. We were like, “$450? No, we’ll come in tomorrow.” So we were hung-over as shit, and we had to be there at noon the next day. He was waiting for us with the mops, and he’s like, “Here you go.” Of course he opened the bar, and we got drunk and cleaned that place for four or five hours, and I can say it’s the cleanest it’s ever been [laughs]. It’s the cleanest club in Sacramento.

Kill the Precedent will play an EP release show at Harlow’s on Aug. 6, 2011 with Will Haven, The Snobs and City of Vain. Tickets are just $10 and can be purchased through Harlows.com. For more information on KTP, like them why don’t you at Facebook.com/killtheprecedent.